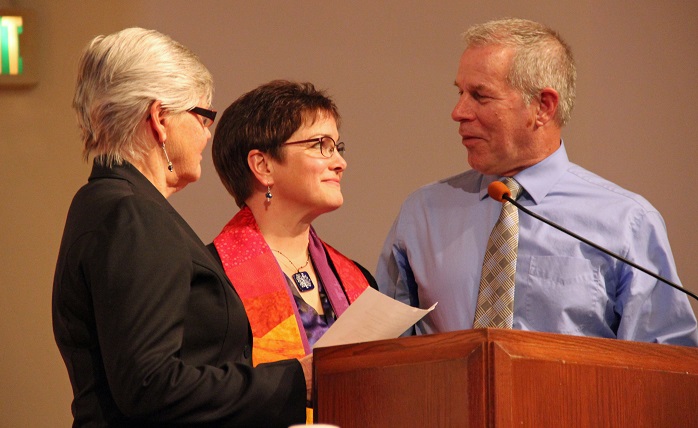 On Sunday, Dec. 11, in an afternoon service, Mountain States Mennonite Conference leadership ordained Theda Good for ministry at First Mennonite Church of Denver. Good is pastor of nurture and fellowship. This marks the first time an openly LGBTQ (lesbian, gay, bisexual, transgender or queer) individual has been ordained in Mennonite Church USA.

In a talk given during the ordination service, Carol Wise, executive director of the Brethren Mennonite Council for LGBT Interests (BMC) said, “This is an amazing day for the Mennonite LGBTQ community. I feel such joy and excitement and elation in this moment. We have waited for such a long time, and it has been a struggle.”

In 2014, Good and MSMC also broke new ground when Good was licensed for ministry on Feb. 2. In response, Mennonite Church USA’s Executive Board issued a February 2014 letter, naming MSMC at variance with the denomination’s polity and Confession of Faith, which states, “We believe that God intends marriage to be a covenant between one man and one woman for life.” In June 2014, the board released a statement noting that the national conference would not recognize Good’s credential or list it in the national database unless the MC USA Delegate Assembly changed these documents. The June statement also called on MSMC to not consider a request to ordain Good unless there was a change to stated polity. (Read more about MSMC and the Executive Board’s decision making processes in this 2015 article).

Since these 2014 statements, MC USA delegates passed two resolutions at the July 2015 assembly in

Kansas City, Missouri: a resolution on Forbearance in the Midst of Difference and a resolution on the Status of the Membership Guidelines. While the Membership Guidelines resolution states that MC USA delegates will not consider a change to current polity documents for four years, the Forbearance resolution states, “Because God has called us to seek peace and unity as together we discern and seek wisdom on these matters, we call on all those in Mennonite Church USA to offer grace, love and forbearance toward conferences, congregations and pastors in our body who, in different ways, seek to be faithful to our Lord Jesus Christ on matters related to same-sex covenanted unions.”

Although Good’s credential will still not be listed in the national MC USA directory, Executive Director Ervin Stutzman notes that the Executive Board is stepping back from regulating area conference credentialing processes: “Our approach is to clarify our ministerial policy and also to give room for area conferences to work it out in the way that seems best in their local context. We trust that MSMC understands the national policy and has acted as they believe to be best,” he wrote in a Dec. 10 email.

Current moderator Patricia Shelly did not respond to requests for comment by press time.

In November 2015, MSMC received a request from First Mennonite Church of Denver to consider Good for ordination. According to conference moderator Karen Cox, this request set in motion a yearlong discernment process, during which MSMC sought counsel from congregations and leaders across the conference and throughout MC USA. The conference received over 100 letters of counsel, and members of the conference’s ministerial council, which leads the credentialing process, spent time praying over each of them. In August, MSMC’s leadership board and ministerial council affirmed ordaining Good by a vote of 93 percent.

“We are working to follow the Spirit of God in our midst,” said Cox. “I realize not everyone in MSMC is

on board with this, but the bylaws give the ministerial counsel the authority to discern credentialing and ordination of people.”

Speakers at the Dec. 11 service included Wise and Isaac Villegas, pastor of Chapel Hill (N.C.) Mennonite Fellowship. Villegas first met Good during a worship service at the MC USA convention in Kansas City when she served him Communion. Following convention, Villegas wrote a public letter to Good, affirming her ministry, and Good responded. Following this public exchange, CHMF invited Good to come preach and lead the congregation in Communion. In May, Villegas’ own pastoral credentials were suspended by Virginia Mennonite Conference and he resigned from the Executive Board after performing a same-sex wedding ceremony.

“I wanted to be involved in Theda’s ordination to celebrate her ministry because I realize that ordination is a way of recognizing that the Holy Spirit is at work in somebody’s life and in their ministry and I’m grateful for the way MSMC and First Mennonite in Denver have already recognized Theda’s ministry and want to honor her in this way,” said Villegas in a Dec. 9 phone interview. “I’m just grateful to be a part of that recognition of what the Spirit has done, is doing and will do in her life.”

Villegas preached a sermon based on the lectionary text for the day, Mary’s Magnificat, Luke 1:46-55. Villegas used Mary’s statement “My soul magnifies the Lord” to explore the role of a minister.

“I wanted to think about how the call upon somebody’s life as a minister when they are ordained is to be invited to magnify the lord through their work in the church and the world and to point out the signs of God’s mercy in our lives,” he said.

Wise also affirmed Good’s call to ministry and ordination. “Somehow in spite of the many trials and disappointments and challenges that have presented themselves, Theda has managed to hold fast to her identity, to her faith, her compassion, her heart. She has been so patient and so gently persistent and so generous in her openness and care. Theda, you are amazing and so deserving of this moment.”

Good herself prefers to keep a low profile and wishes her ordination were not “newsworthy.”

“I think of myself as an ordinary person who has found my gifts and calling to be in pastoral ministry. I am grateful to the congregation at First Mennonite Church of Denver, who has called and affirmed me as one of their pastors,” wrote Good, in a Dec. 9 email.

Good also sees a broader stirring of God’s Spirit happening in MC USA and beyond. “Next year will mark the 500th anniversary of the Protestant Reformation, which began when Martin Luther nailed his 95 theses to the Wittenberg Church door. The shift that event created has had a profound and lasting impact on many of our faith traditions in the Protestant as well as the Catholic Church. I believe we are in another seismic shift. What is God’s Spirit saying to the church today? What is our invitation to pay attention to in how we creatively grow in our spiritual formation for the 21st century? I believe God is still speaking.”