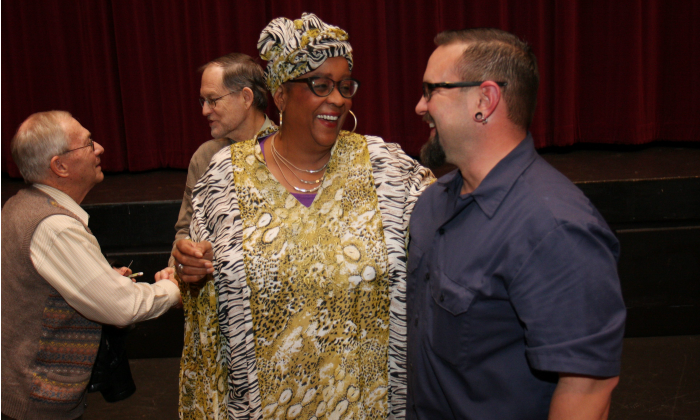 Armster, the transitional executive director for Mennonite Central Committee Central States, noted that when Bethel’s Jean Butts contacted her about being the keynote speaker for the annual celebration, “I was mourning the death of Sandra Bland, an African-American woman murdered on her way to starting a job at her alma mater.”

Bland was pulled over by Waller County, Texas, police on July 10, 2015, on a minor traffic violation, arrested for “talking back” and three days later found dead in her cell.

Bland’s family protested the coroner’s ruling of suicide. In December, a grand jury declined to indict anyone in her death.

“[In recent years,] the incarceration and state-sanctioned murder of African-American and indigenous women has doubled that of men,” Armster said, describing the reason for the title of her address, “The New Jane Crow.”

She opened by reading Micah 2. When the Israelites claim to be “the good people,” God rebuffs them, saying, “What do you mean, ‘good people’!…You rob unsuspecting people out for an evening stroll.…You drive the women of my people out of their ample homes. You make victims of the children and leave them vulnerable to violence and vice” (Micah 2:8-11, The Message).

Armster briefly traced the history of mass incarceration in the United States.

The Sentencing Project “provides some startling statistics,” she said. “The United States is the world leader in incarceration: 2.2 million people, a 500 percent increase over the past 30 years, despite increasing evidence that mass incarceration is not the most effective way of producing public safety.”

Among its many statistics, the Sentencing Project shows racial disparity in sentencing. While the likelihood of a white man going to prison is 1 in 17, for a black man it’s 1 in 3 and a Latino man 1 in 6. White women have a 1 in 111 chance, while for black women it’s 1 in 18 and Latina women 1 in 45.

“What happened 30 years ago that resulted in this surge?” Armster said. “We can make a straight line from the War on Drugs [declared by President Richard Nixon in 1971], but I think we need to go back further, to 1619, when the first Africans were brought to these shores.

“From the very beginning, black bodies were seen as property, without intellect, feelings, what have you. The precursor to our modern police system can be found in the slave patrols formed in the South.”

“I could go on and on about the origins of modern-day police and policing, the racial disparity in sentencing, even about the poisoning of the children and residents of Flint, Michigan, which is 60 percent African-American–the many ways people of color are being terrorized. African Americans, indigenous people, Latinos. Terrorizing is not a thing of the past.

“The number of women being incarcerated has had a cost in terms of the lives of children,” she said. “Often, they are incarcerated for ‘minor drug offenses.’ Most of them are mothers, many the sole caregivers for their children.

“Dr. King … said: ‘Our lives begin to end the day we become silent about the things that matter.’ So what can you do to make your life matter? I have a couple of suggestions.”

Armster first encouraged reading The New Jim Crow by Michelle Alexander, which covers, among other things, mass incarceration and how U.S. drug laws and the War on Drugs continue to disenfranchise African-American males.

Second, she urged her audience to “get involved with the Newton (Kan.) Community for Racial Justice. They are doing amazing things. They recognize that unless we do the work, nothing will change. They need people who care, who want to choose a life that matters.

“Get involved in organizations working at reforming the criminal justice system. It’s broken. People and lives are being damaged–when you talk about 30 years, you’re talking about a whole generation.”

She closed with another reading from Micah 2, where God says, “I’m calling a meeting…I’ll get them together in one place …Then I, God, will burst all confinements and lead them out into the open” (Micah 2:12-13, The Message).

The freewill offering for the evening went to the Newton Community for Racial Justice, which Hamilton Williams, Bethel associate professor of social work, introduced.

Last fall, the Newton Community for Racial Justice sponsored a Roots of Justice anti-racism training at Shalom Mennonite Church in Newton. Two participants spoke briefly about their experience with the training.

“I didn’t think my opinion would matter because I’m young, and I didn’t think people wanted to listen to me,” said Bethany Montoya, a Bethel College freshman from Wilmer, Texas. “I found out my opinion did matter, and adults came to me and asked me what I thought and what could be done.
“I learned that a lot of people don’t see racism – I found out I didn’t. I thought it was normal for people to tell me it was wrong to speak Spanish. I found out that it was taking my culture away, and that it was not OK.”

Newton police lieutenant Brian Hall said that his attitude going into the training was, “‘Racism doesn’t exist [because] I haven’t seen it.’ Then I sat down and started listening to stories like the one Bethany just told, and heard from Conrad, one of the trainers, who grew up in West Philadelphia.

“I think really great things are happening in Newton–we’ve come a long way and we have a long way to go.”

Jean Butts from Bethel’s student life staff and the main planner for the Martin Luther King Jr. Day events, closed the evening by playing a song from the soundtrack of the 2014 feature film Selma, “Glory” by rapper Common and John Legend.

A repeating line says: “The war is not over, victory isn’t won, we’ll fight on to the finish, then when it’s all done, we’ll cry Glory!”

“The situations we’re dealing with in our society are controversial,” Butts said. “Dr. King was controversial, too. He was seen as a radical.

It’s a part of carrying on his spirit, to be controversial and unpopular. Are you ready to be unpopular, to carry on in a town-of-Selma [way]?”