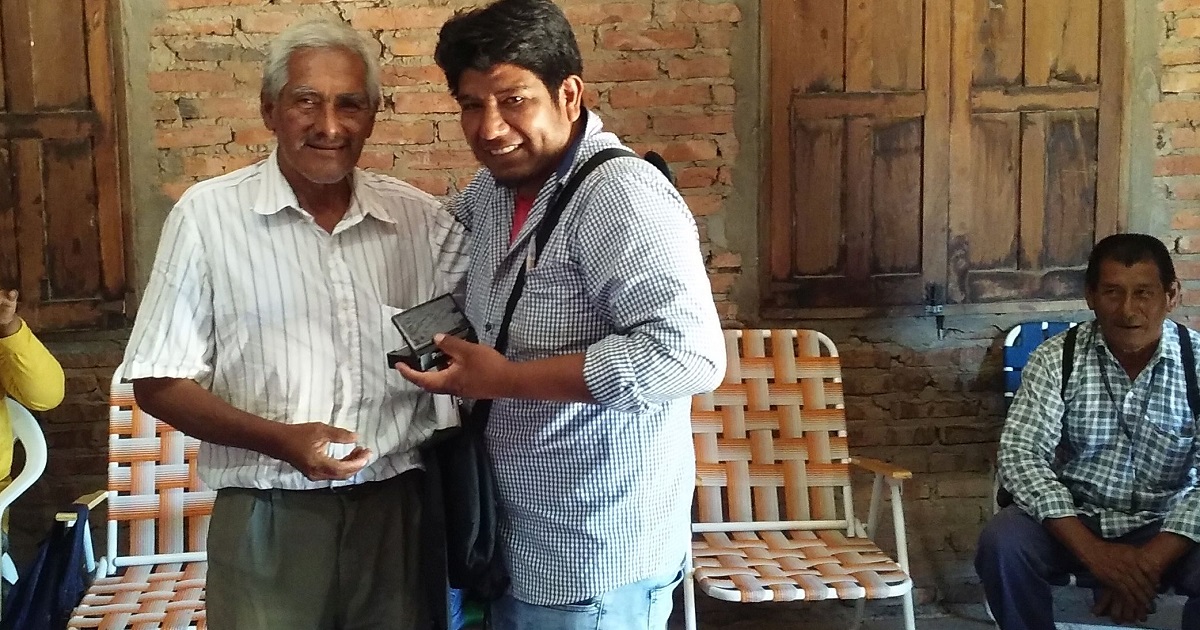 Photo: Pastor Mario Alegre (left) from the rural town of Miraflores, Argentina, receives a solar-powered mp3 Proclaimer from Pastor Horacio Paz. With the Proclaimer, Toba Qom people can listen to the whole New Testament in their own language. Photo by José Oyanguren.

When the full Bible in the Toba Qom Indigenous language became available in 2014, pastors treasured their new Bibles and the opportunity to read Scripture in their heart language during church services.

Yet the culture is predominantly oral, and pastors like Eliseo López longed for the day when they could hear the word of God more fully, and better reach both the elderly and youth.

In 2017, his dreams were realized. That’s when Alfonsina and José Oyanguren, associates with Mennonite Mission Network in the Chaco, worked with local leaders to form a collaborative oral project with the Argentine and Bolivian Bible societies. The project, engaging 33 readers from eight denominations and 12 Indigenous faith communities, birthed a recording of the entire New Testament. The recording was used immediately on the radio and by the youth on their cell phones, yet many people, especially the elderly in more remote areas, did not have access.

This year, through a collaborative effort, Oyanguren and the Toba Qom leaders have distributed a donation of 100 handheld solar-powered mp3 devices called “Proclaimers.” They are finding their way into the hearts, homes and faith communities across the Chaco and Formosa provinces of Argentina. Because their culture is still orally oriented, the Proclaimer is especially suited for remote communities where radio doesn’t reach.

“I have never been able to read the entire New Testament in my language, but now I can hear it all,” López said soon after he received his first Proclaimer.

Juan Victorica, a preacher who suffered a light stroke, said that he couldn’t sleep for several nights until he remembered he had a Proclaimer near his bedside. “I put it on my pillow to hear only the word of God. Then I could sleep. I did this for many nights,” he said.

Pastor Cornelio Romero said that since the Proclaimer arrived in his community, the elderly women of his congregation gather at the church to listen together every Wednesday. “I turn on the recording on the Proclaimer, and they stay, and they stay. Time doesn’t seem to matter.”

The amount of time it takes to listen to portions of the New Testament recordings is only a fraction of the time it took to produce the original recording. Bolivian technicians lived at Centro Educativo Saỹaten (Qom Knowledge Educational Center) in Castelli, Argentina, for two months, working in the recording studio eight hours daily, Monday through Saturday.

Each character of the New Testament was recorded by a different person in order to give it a more realistic tone. The Gospels and Acts were dramatized while the rest was read by narrators. As each participant read their portion from a booklet, two correctors listened carefully for errors. Readers were coached on voice tone.

“For example, the person reading the part of the thief on the cross next to Jesus would need to read according to what that setting required with pain, halting speech, agony,” Oyanguren wrote in an email.

In the past two years, the influence of the New Testament has been growing as the Toba Qom are empowered to hear God’s word at anytime, anywhere there is a radio, or device, available. This is one of the latest impacts of the Oyanguren family’s ministry. They arrived in Argentina in 2003 to be part of the Mennonite team with a focus on Scripture in the Indigenous languages of the Chaco.

Today, 15 years later, with a full translation of the Bible and the oral recording heard on Proclaimers, cell phones and radio broadcasts, they are hearing praise for the way the word of God in the Toba Qom language is spreading among the people.

“With a complete Bible in the Toba Qom language, we will continue proclaiming the word of God in each community, with the power of the Holy Spirit in the words and deeds, for holistic transformation in the Toba Qom communities and churches,” Oyanguren wrote.