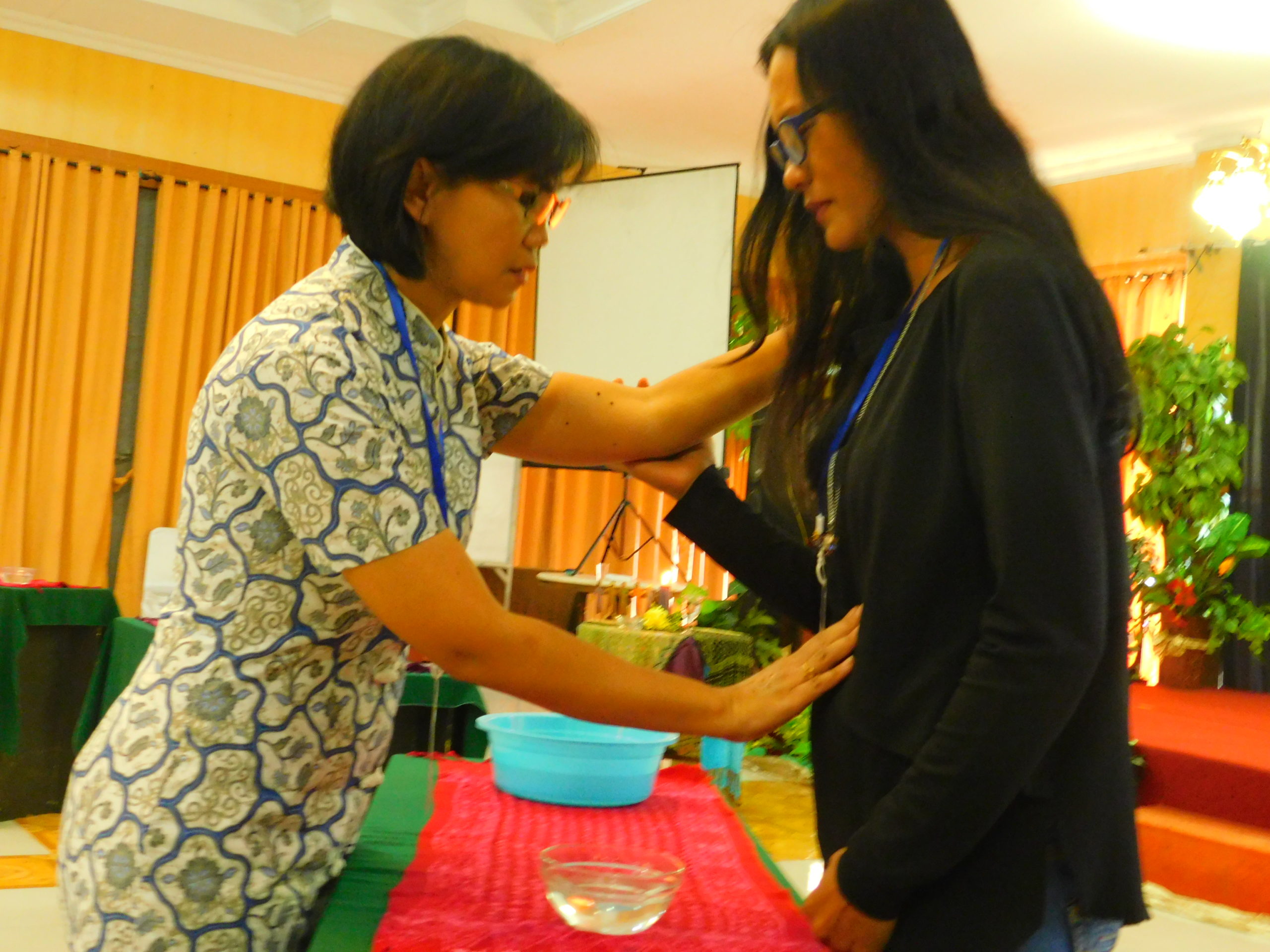 After nearly four years of planning, Carolyn Heggen, a psychotherapist specializing in trauma healing, and Rhoda Keener, Sister Care director for Mennonite Women USA, led a Sister Care leadership training seminar Jan. 28-30 in Yogyakarta, Indonesia, the epicenter of the 2006 earthquake that left over 5,700 dead, tens of thousands injured, and hundreds of thousands homeless. Sister Care seminars help women heal from their own trauma and train them to help others heal.

Indonesia is comprised of more than 17,000 islands, around 6,000 of which are inhabited. It lies along the equator and is geologically unstable, prone to volcanoes, earthquakes and tsunamis. Java, the island where the trainings were held, is the world’s most heavily populated island, and 90 percent of Javanese are Muslim.

The 89 women who attended came from the islands of Java, northern and southern Sumatra, Bali and Papua. They represented two of the three major Anabaptist groups in Indonesia—GKMI and GITJ—and four women came from local evangelical congregations. The women traveled by boat, plane, train, bus and car, some for days, to get to the retreat center.

Indonesia is an ethnically diverse country with around 300 distinct native ethnic groups and more than 100 languages. Most people understand Indonesian, the language used in government and education. Skilled interpreters helped with communication.

Many of the participants were pastors or pastors’ wives. Although pastors’ wives often do not have theological training, there is a strong expectation for them to serve in the church because of their husband’s role. Women talked about the challenge of responding to the many demands placed on them and the difficulty and need to set limits.

A group of pastors who attended comprise the women theologians’ leadership group in Indonesia, called PUAN. They spoke of the need for additional resources for pastors and expressed a desire to spend more time studying the Mennonite Central Committee booklet handed out at the seminar, Created Equal: Women and Men in the Image of God by Linda Gehman Peachey.

The seminar concluded with a closing blessing inviting women to come in pairs to first anoint themselves with water from a bowl representing their tears and then move to a bowl of water representing Jesus’ living water and anoint one another.

Indonesia is the 17th country where Mennonite Women USA’s Sister Care seminars have been shared. The manual Sister Care: Equipping Women for Healing Ministry by Carolyn Holderread Heggen with Rhoda Shenk Keener has been translated into 13 languages. The seminar was funded by the Schowalter Foundation and gifts from individuals.