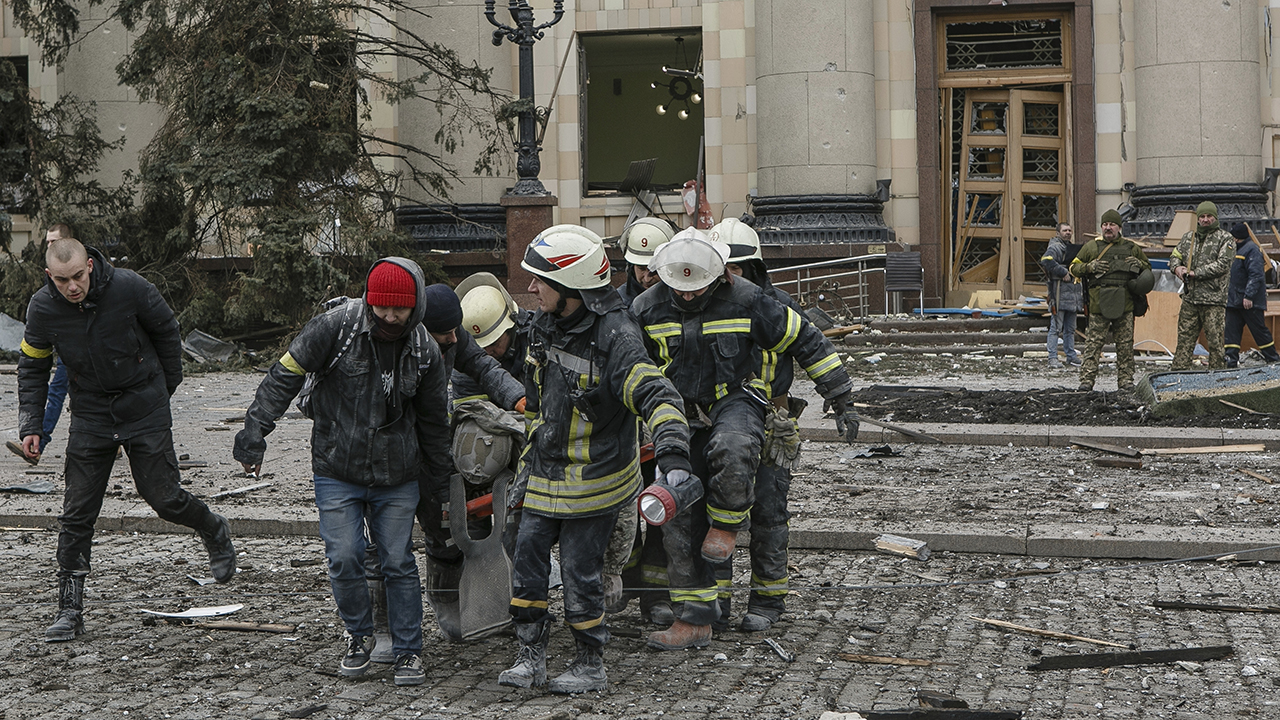 Mennonite Brethren churches in several Ukrainian communities are choosing to view the Russian military forces surrounding their towns as an opportunity to share God’s love.

Roman Rakhuba, leader of the Associated Mennonite Brethren Churches of Ukraine, told Anabaptist World March 2 by email that families are evacuating when they can and staying to help neighbors when they can’t.

“The towns of Berdiansk, Molochansk and Balkovoe in the southeast, near the Azov Sea, have been surrounded by Russian army, and this is where we have our churches,” he said. “They’re totally isolated for entrance and exit. They report about having a lack of food, water and other basic goods in stores, but the local churches are doing their best to provide for their members.

“Our ministers also say that this is a huge opportunity to share the gospel with nonbelievers. For example, churches in Balkovoe and Novomoskovsk have organized bomb shelters where both believers and nonbelievers take cover, and the latter can see the love of God through the work of our churches.”

About 50 people from Rakhuba’s Zaporizhzhia congregation — mostly families and youth — have left the city for the safety of Zakarpattia Oblast, a region more than 700 miles away in Ukraine’s far west that borders Poland, Slovakia, Hungary and Romania. Women and children are allowed to leave the country, but most men between the ages of 18 and 60 must remain.

“From here we are trying to figure out how we can establish ways of helping people, both refugees from affected regions and people who cannot leave for one reason or another,” Rakhuba added.

AMBCU has set up a “humanitarian corridor from Europe” to deliver supplies for distribution, and Rakhuba said AMBCU has the ability to receive relief kits on trucks from abroad. The International Red Cross has advocated for similar safe passages to deliver badly needed medical supplies and other humanitarian assistance.

Molochansk has experienced a significant Russian military presence as forces pass through the community to confront the Ukrainian army in the city of Tokmak about seven miles away. Friends of the Mennonite Centre in Ukraine, an organization based in Winnipeg, Man., operates ministries out of a former Mennonite school in Molochansk, which was the 19th-century hub of Molotschna Colony, the largest Mennonite settlement in the Russian Empire.

“Over 200 Russian military vehicles moved through Molochansk on their way to Tokmak” on March 1, reported the center’s board chair Alvin Suderman. “The big need in the area is food. Stores are depleted. The Mennonite Centre is well-stocked and is operating a soup kitchen, much as Mennonite Central Committee did 100 years ago.

“The board of the Friends of the Mennonite Centre in Ukraine authorized our local representatives to purchase food where it is available up to the amount of $15,000. Requests are coming in from many occupied areas and the banking system is still working. We anticipate increasing this amount in the coming days.”

In Zaporizhzhia, Maxym and Anya Oliferovski direct New Hope Center, an organization supporting at-risk youth and families in crisis, in partnership with MCC and Multiply, the North American MB mission organization. Maxym Oliferovski shared in Feb. 28 interviews with MCC and Christian Leader magazine that he and his wife relocated to the city’s outskirts and are staying to help others as long as possible, although explosions from shelling could already be felt as Russian forces advanced closer. The following day the Oliferovskis were downtown and watched a missile fly over them.

“You hear sirens. You see the neighbors going up and down into a bomb shelter. You hear all the news,” he told MCC. “But at the same time, we were thinking ‘OK, how do we help the families, our neighbors, church members? So we purchased some food ahead of time, and we made food kits. . . . But then the further you go, the less supplies you have.”

The couple have been working to help families with children evacuate to lessen the trauma of war. Some people do not have transportation, and roads and trains are packed, so they have coordinated shared vehicles when possible.

“So many people just go to western Ukraine hoping this will end soon and they can come back,” Oliferovski said. “… As we stay here, we pray that we will be helpful and can provide help and leadership to our church, help to families, help to communities, whatever is needed.”

Thanks to the pandemic, their small church learned how to worship online. He told Christian Leader that although the 20-25 families in the church are now scattered, they have still been able to gather on Zoom for prayer and encouragement from Scripture.

“We have two MB chaplains in the military, and we’re in touch on a daily basis,” Oliferovski said. “They’re saying that the soldiers are praying; they are accepting Jesus.”

Many men have joined territorial defense groups, and the government is arming civilians while others make homemade explosives.

“If some people choose to get a machine gun, I wouldn’t condemn them,” he said. “But I will tell them, ‘When you start doing that, you just got into the war. You need to be responsible for that.’

“Personally, and as a Mennonite Brethren church, we’re helping in one of the hospitals, just whatever help they need.”

MCC and Multiply are collecting donations to support MB churches in Ukrainian war zones at MCC’s U.S. and Canadian websites and multiply.net/ukraine-in-crisis.