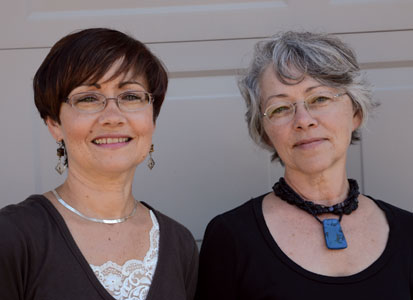 Our great-great-great- grandparents Joseph and Barbara (Yoder) Bontrager were among the first Amish to settle in Elkhart and LaGrange counties in northern Indiana, now a thriving Amish and Mennonite region. We Bontragers have always celebrated the hard work and pioneering spirit of these ancestors; a stone marker three miles from Marty’s house commemorates the original homestead of Joseph (Sep) Bontrager.

According to the historical account, Sep and Barbara departed Somerset County, Pa., on June 3, 1841, and arrived in Indiana on June 29, having traveled more than 400 miles in covered wagons. There were 24 people in their caravan—eight adults, the rest children. Within weeks, the four families had purchased land. More Amish families followed, from Pennsylvania and Ohio, and the settlement grew rapidly.

Until recently, we have imagined this story of origin through the mythical lens of the American pioneer, applauding the endurance of our ancestors as they faced uncertain adventure and tremendous risk and turned wilderness into farmland through sheer dent of hard work.

We knew there were Native Americans in Indiana before our ancestors arrived; we grew up among towns with such names as Topeka, Wawaka, Mishawaka and Shipshewana. But somehow we did not connect their disappearance with the arrival of our ancestors. Our obligatory seventh-grade Indiana history began with the English and French settlers in the region and either ignored or elided the narrative of the Potawatomi, a native tribe who—since the War of 1812—had lived peaceably with their white neighbors.

The Potawatomi were coerced to sign a series of treaties to cede their land to the government. Known as the Whiskey Treaties—because whiskey was used to induce the Indians to sign—they included the Treaty of Yellow River, signed in August 1836, which promised $1 per acre of Indiana land and 320 acres of land in Kansas for each member of the tribe if they agreed to leave within two years.

By 1838, most of the Potawatomi nation had migrated peacefully to the West except Chief Menominee, who declined to leave. In response, the governor ordered the military to remove his tribe by force. After burning the crops and homes of the recalcitrant Indians, the military rounded them up and marched them off to Kansas.

The forced journey, known as the Trail of Death, lasted from Sept. 4 to Nov. 4, 1838. Of the 859 Potawatomi who began the 665-mile march, only 700 arrived in Kansas. (Not all the missing ones died; some managed to escape along the way.) The houses that were to have been built and waiting for them in Kansas were nonexistent, and winter was coming.

As the writers of Amish and Mennonites in Eastern Elkhart and LaGrange Counties, Ind., 1941–1991, noted, “Unlike the Israelites who found it necessary to defeat and destroy the inhabitants of their promised land, the Amish found no such obstacles in northern Indiana.” While these ancestors—as followers of Menno Simons and Jakob Ammann—would undoubtedly have refused to take up arms to clear lands they wished to occupy, one wonders whether it occurred to them that a mere three years before their arrival the U.S. Army had done just that for them.

Our ancestors came to this country in search of religious freedom. One wonders how they allowed themselves to participate in displacing another people. Perhaps, like other European immigrants, they embraced the view of Native Americans as un-Christian and uncivilized “savages,” thereby shutting off any connections they might have made to their own persecuted past?

We offer this as a cautionary tale. Our Anabaptist ancestors, by all accounts, were devout people committed to faithfulness to the church and to their separatist way of life. If this complicity with the government’s agenda of empire building seems at odds with our postcolonial, postmodern sensibilities, we do well to remember it is aligned with the 19th-century American idea of Manifest Destiny. What remains for us is not so much to judge our ancestors as to question the ways we, like them, tend to focus on our own small communities and fail to notice the injustices around us we may be implicitly supporting.