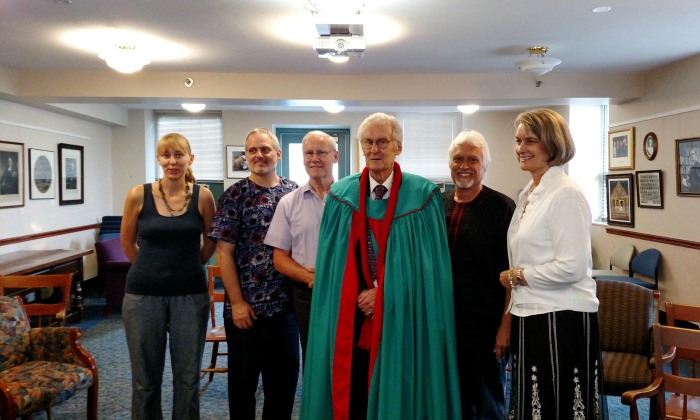 In the mid-20th century, Mennonites were making mission history in West Africa. Today, they are recording that history, even as they carry on the rich legacy of an Anabaptist approach to ministry.

Bruce Yoder, who has served throughout West Africa with Mennonite Mission Network since 2000, defended his doctoral dissertation at Boston University School of Theology on Sept 1. Yoder researched one of Mennonite Mission Network’s most significant contributions to missiology, that of honoring the Christian expression of African Initiated Churches.

Mennonite missionaries and African Independent Churches: the development of an Anabaptist missiology in West Africa: 1958-1967 is Yoder’s case study that sheds new light on relationships between African indigenous Christian movements and Western Christians during the period of decolonization and African nationalism. He says that a worldview that did not separate spiritual and material realities, and previous experience with Western missionaries, led West African Christians to expect that mission included the establishment of schools and hospitals.

However, workers with one of Mission Network’s predecessor agencies, Mennonite Board of Missions, ascribed to the theory that such institutions caused financial dependency and created obstacles to people finding their own locally appropriate solutions. Edwin and Irene Weaver, who had served many years in India before arriving in West Africa, likened Western structures in non-Western contexts to the young David struggling to move effectively in Saul’s armor.

Rather than burdening African churches with imported solutions, the Weavers focused on encouraging relationships, empowering churches through biblical training, and reinforcing indigenous identity. Through this engagement, the Weavers and their colleagues birthed an Anabaptist missiology that became influential throughout Africa. (Read more about this story here.)

Dana L. Robert, Yoder’s advisor, wrote in an e-mail: “Bruce has written what is probably the most detailed study of the relationship between [African Initiated Churches] and mission churches that exists. It is a remarkable piece of scholarship.”

For Inus Daneel, one of the world’s foremost authorities on African Initiated Churches who served as a reader for the dissertation, conferring Yoder’s degree was an emotional occasion, a sort of “passing on the torch,” Robert said.

“Not only is it [Daneel’s] last dissertation as reader, but it is on a subject very dear to his heart,” Robert said.

Yoder, and his wife, Nancy Frey, have served in Benin and now live in Burkina Faso with their two teenagers. From his home in Ouagadougou, Yoder maintains relationships with churches throughout the West African region, especially in Benin and Nigeria.