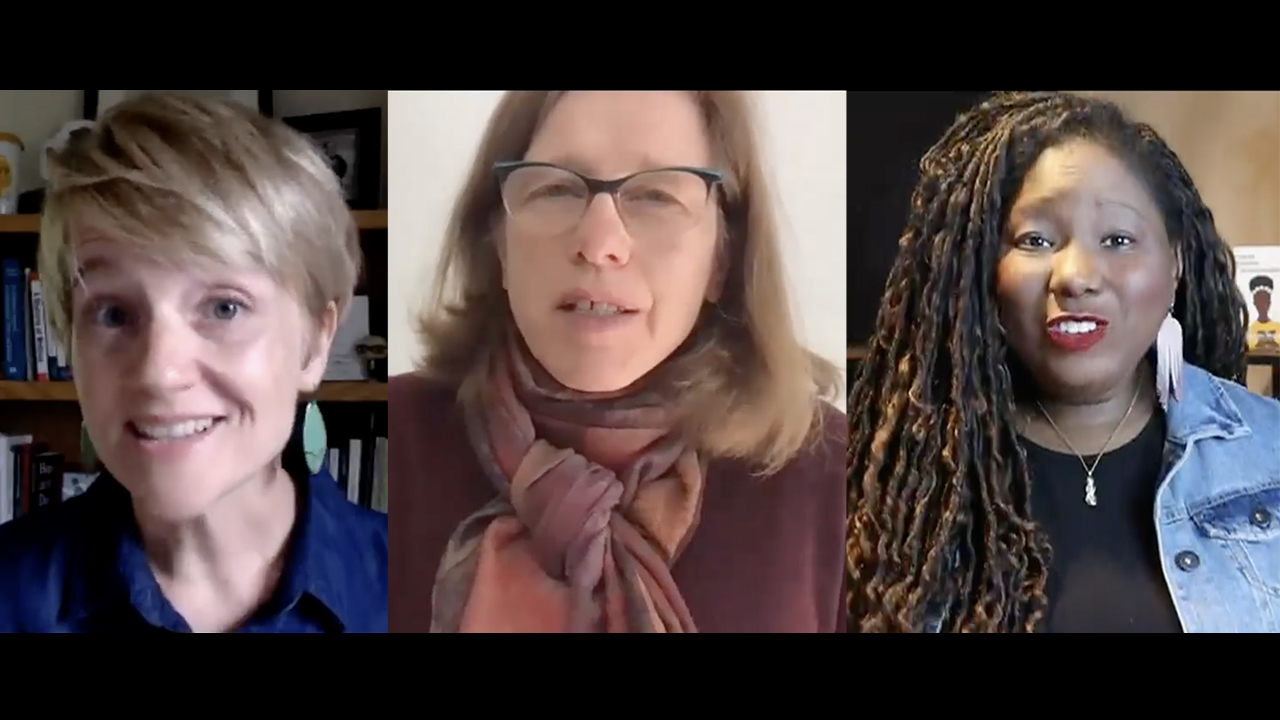 “If we are to be authentic peacemakers following Jesus’ example, we have to be consistent in our actions when we find ourselves in situations where we must respond to violence,” Padilla said.

Stoltzfus Buller noted that responses can even include doing nothing.

“Structural violence takes away our individual responsibility,” she said. “I’m not locking people up, I’m not sending people to the border, I’m not shooting people, but I’m responsible for a system that does those things to people. … In the same way that our power systems perpetuate violence, our small actions can work against them.”

Small actions with big consequences start with the words we speak or write every day.

Marathana Prothro, assistant professor of communication at Bluffton University, reinforced the power of words in her youth seminar on stopping destructive communication.

Drawing from research on negative communication patterns in marriages, Prothro identified the damaging implications of criticism, contempt, defensiveness and withdrawal, and offered means of better connecting with others through being impeccable with your word, not taking anything personally, not making assumptions and choosing to do your best.

“We are surrounded by things that separate us from each other and the truth and reality of God’s creation,” she said. “When we observe people mocking, being mean, attacking character, this is really, really difficult to heal and come back from. But because we are a people of faith focused on redemption and reconciliation and grace, it is possible. I know it is, I have seen it happen.”

The complexities of conversations were addressed in an adult session by Betty Pries, CEO of Credence & Co., which works to support leaders and transformation organizations. She is the author of The Space Between Us: Conversations About Transforming Conflict, coming this fall from Herald Press.

Pries focused on polarized conversations, which typically involve each side speaking about their own strengths and another group’s weaknesses.

“That’s a diagonal argument going past each other,” she said, noting each side loses sight of their own weaknesses and misses the opportunity to draw on both sides’ strengths. “To fight fairly is to compare positive to positive and negative to negative, and not go diagonal past each other.”

She also encouraged individuals and groups to be aware of the tendency to put a moral value on their side while morally devaluing the other, because spiritual maturity is built on the capacity to see the goodness within oneself, and the goodness of another, at the same time.

Pries said the inspiration for holding two truths at once can be found in God.

“God looks at each one of us and says, ‘You are beautiful and my beloved. I welcome you with unconditional love. But there is room for improvement.’ ”

Osheta Moore observed the pain of polarities from the Minneapolis area as the mother of a biracial family in the racial reckoning that developed after the death of George Floyd under the knee of a white police officer. She said in her seminar that she grew up thinking God made a mistake creating her as a Black woman because her church ignored disproportionate violence against people of color. It identified racism as a personal issue and not a systemic problem that affects every aspect of life.

Moore is author of Dear White Peacemakers, published by Herald Press. When she worked with white Christians seeking to understand systemic racism, she began to desire something more holistic than either the superficial “grace” of being one in Christ while ignoring unjust systems or the determined and difficult work of dismantling racism.

“We need a new way defined by the grit of antiracism and the grace of reconciliation,” she said. “We need a third way.”

That third way is rooted in God’s shalom: belovedness in each human being that springs up from God’s desire for flourishing and wholeness for all of creation.

In the live chat, Moore said she has encountered resistance.

“It’s been difficult,” she said. “But as an Anabaptist, I cannot separate the way of Jesus and the peacemaking ethic of the kingdom of God from my antiracism work.”