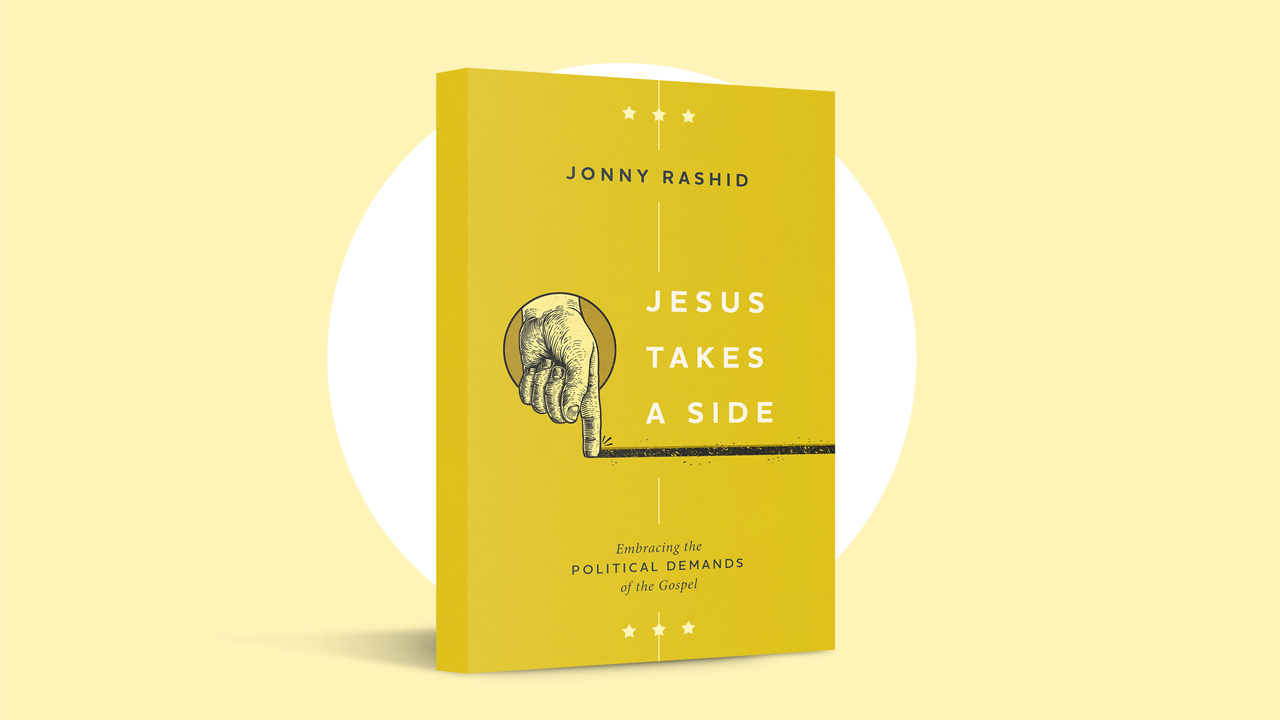 Jesus Takes a Side: Embracing the Political Demands of the Gospel by Jonny Rashid

The question of Jesus’ relevance to politics is a perennial one, especially for Christians living in a military and economic superpower. At the beginning of the 20th century, proponents of the social gospel movement, like the theologian Walter Rauschenbusch, argued that Jesus’ life and teachings compelled Christians to support specific economic and political policies.

A couple of decades later, Christian realism arose as a sympathetic counter to the social gospel movement. Its leading proponent, Reinhold Niebuhr, agreed with Rauschenbusch that Jesus and the kingdom of God should compel Christians to pursue justice, but he cautioned against equating specific political policies with gospel ethics. Instead, he argued that Jesus and the kingdom offer a vision of absolute, perfect, self-giving love — while politics can only offer a compromised, ambiguous, relative justice approximating kingdom ideals in light of sin’s reality.

Niehbuhr’s realism created a dilemma for Anabaptist thinkers. On the one hand, Anabaptists have always been marked by their commitment to pursuing Jesus and the kingdom in communities of discipleship. On the other, after the devastations of World War II, Anabaptists were drawn to pursuing peace and justice in society, which entailed political engagement.

Over time, Anabaptist thinkers resolved this dilemma in what today’s neo-Anabaptist writers refer to as the “third way”: Jesus is indeed political but represents a different kind of kingdom politics that transcends partisan divisions. The role of the church is to embody Jesus’ politics as a witness of a new way of being political.

The problem with this third-way approach, says Anabaptist pastor Jonny Rashid in Jesus Takes a Side, is that Jesus’ politics is not about transcending divisions but about standing in solidarity with the oppressed, which oftentimes exacerbates divisions. “We cannot seek political harmony as an expression of the gospel because the gospel has political ramifications,” Rashid writes. “If we are more concerned with divisiveness than we are with faithfulness, we will end up opposed to God and the oppressed.”

Rashid expands this argument with expositions of Scripture — focusing on Gospel narratives of Jesus — and reflections on the U.S. political landscape and Rashid’s own experiences in ministry and social justice advocacy.

In the first two-thirds of the book, Rashid offers a full-throated rejection of the third-way approach to politics and church polity. He describes how the Trump presidency revealed the lie of third-way politics. In the wake of Trump’s Muslim ban, Rashid, as an -Arab-American, heard clearly that he didn’t belong. As a pastor, he knew he could not administer communion — a practice of Christian solidarity — without speaking out about the harm being done to immigrants and people of color, even if doing so risked “politicizing the moment.”

The Trump presidency tested the third-way approach to politics, and Rashid demonstrates how third-way politics failed. Instead of providing a kingdom-oriented alternative to authoritarianism on the right, advocates of third-way politics spent four years drawing false equivalencies between the so-called extremes of the right and left — as though calls for defunding the police in the wake of the murder of George Floyd at the hands of police could be compared to the racist rhetoric of building walls and banning Muslims.

But in the last third of the book, Rashid strikes a decidedly different tone as he attempts to describe a constructive alternative to third-way politics. He admits that the evils of the Trump presidency made him feel “morally compelled to vote.” However, he notes that voting is not a moral imperative but “a practical matter of choosing the lesser of two evils.” He admits there may be times when Christians choose not to vote.

Here the social-gospel fervor of the earlier chapters gives way to a sober realism that views politics as the work of making judgments about relative justice in light of the kingdom ideal. While the gospel may demand we side with the oppressed, it doesn’t prescribe how to do it. Discerning this is the hard work for Christian communities to engage in together. We don’t get off the hook by claiming a third way that transcends politics. But neither do we get a pass by claiming Jesus for our political side. Instead, as Paul wrote to the church in Rome, it is on us to discern the will of God (Romans 12:2). Rashid’s Jesus Takes a Side is a good place to start.

David C. Cramer is pastor of Keller Park Church, a Mennonite Church USA congregation in South Bend, Ind., managing editor at the Institute of Mennonite Studies at Anabaptist Mennonite Biblical Seminary and co-author of A Field Guide to Christian Nonviolence.