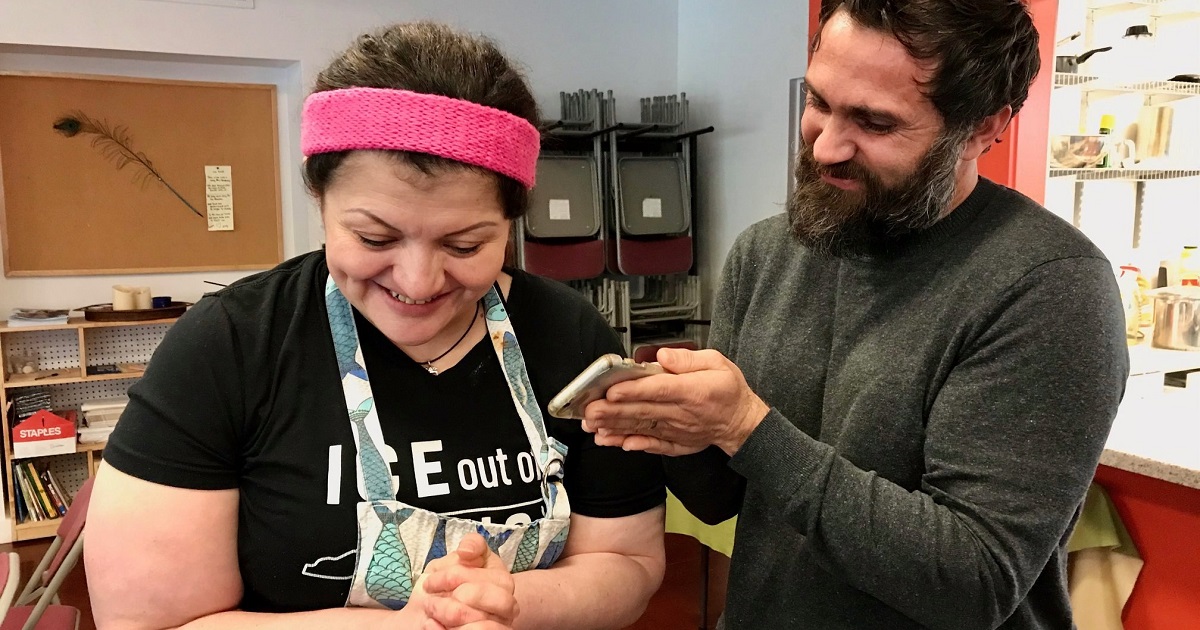 Photo: Rosa Ortez-Cruz, left, and Isaac Villegas, pastor of Chapel Hill Mennonite Fellowship, listen as her attorneys on speakerphone share news about the court ruling to cancel her deportation order. Photo by Xaris A. Martínez.

In a unanimous ruling, the U.S. Court of Appeals for the Fourth Circuit has permanently withdrawn the deportation order for Rosa Ortez-Cruz, who has been living in sanctuary for nearly two years at the Church of Reconciliation in Chapel Hill, North Carolina, also the meeting site of Chapel Hill Mennonite Fellowship (CHMF). The two congregations offered Ortez-Cruz sanctuary to protect her from deportation by U.S. Immigration and Customs Enforcement (ICE).

CHMF is part of Central District Conference of Mennonite Church USA. Church of Reconciliation is part of Presbyterian Church USA.

Ortez-Cruz, who is a Honduran national and longtime resident of Greensboro, North Carolina, in April 2018 was the first person to be welcomed into public church sanctuary in Chapel Hill. She came to the United States from Honduras in 2002, fleeing extreme domestic violence. She was stabbed multiple times by a former partner, spending over a month in the hospital at age 19 and does not want to return to Honduras for fear that her abuser will hurt or kill her. She is the mother of four children, three of whom are U.S. citizens.

Following the Feb. 26 court ruling, the nonprofit Siembra NC’s Facebook page posted a statement from Ortez-Cruz, translated to English as: “I’m happy. I’m shaking with happiness! Thank you all! I am so grateful for all the support, for all the prayers. My freedom has been ensured, but I remember all my friends [in sanctuary] still fighting for their freedom…”

Xaris A. Martínez of CHMF said in a Feb. 27 interview that “we’re all still a bit shocked” at the news of the court’s decision.

“I had an overnight shift with Rosa last night [the night of the decision], and we sat together for quite a while, just stunned,” Martínez said. “Then our phones would ring and we’d both share the good news yet again with whoever was on the line.”

As a precautionary measure, Ortez-Cruz will remain living in sanctuary while she awaits a hearing date from the U.S. Department of Justice’s Charlotte Immigration Court, Martínez said. The sanctuary journey continues for now, she said, “but having the order of deportation be withdrawn permanently is a huge source of relief for Rosa.”

Isaac Villegas, pastor of CHMF, said in a Feb. 27 Facebook post that Ortez-Cruz “has endured so much.”

“I’ve been overwhelmed by the strength of her faith,” Villegas said. “She is a sign of hope.”

Villegas noted that members of CHMF and Church of Reconciliation have provided “daily solidarity” with Ortez-Cruz. More than 160 regular volunteers have provided 24-hour accompaniment to keep her safe, handled grocery shopping and laundry and more, he said. Other congregations in the region and across the country have supported their efforts.

On July 4 The New York Times published an article describing fines being given by ICE to migrants across the country. ICE fined Ortez-Cruz $314,007, the article said, while Edith Espinal, who is living in sanctuary at Columbus (Ohio) Mennonite Church, was fined $497,777. According to an ICE letter, ICE fined Espinal because she had “willfully” refused to leave the United States and had “connived or conspired” to prevent her deportation, the article said.

Martínez said Ortez-Cruz’s attorneys appealed the fine and it was withdrawn in October.

“Please continue to keep Rosa and her loved ones in your prayers and participate as you are able in supporting the sanctuary efforts of both CHMF and other congregations around the country,” Martínez said.