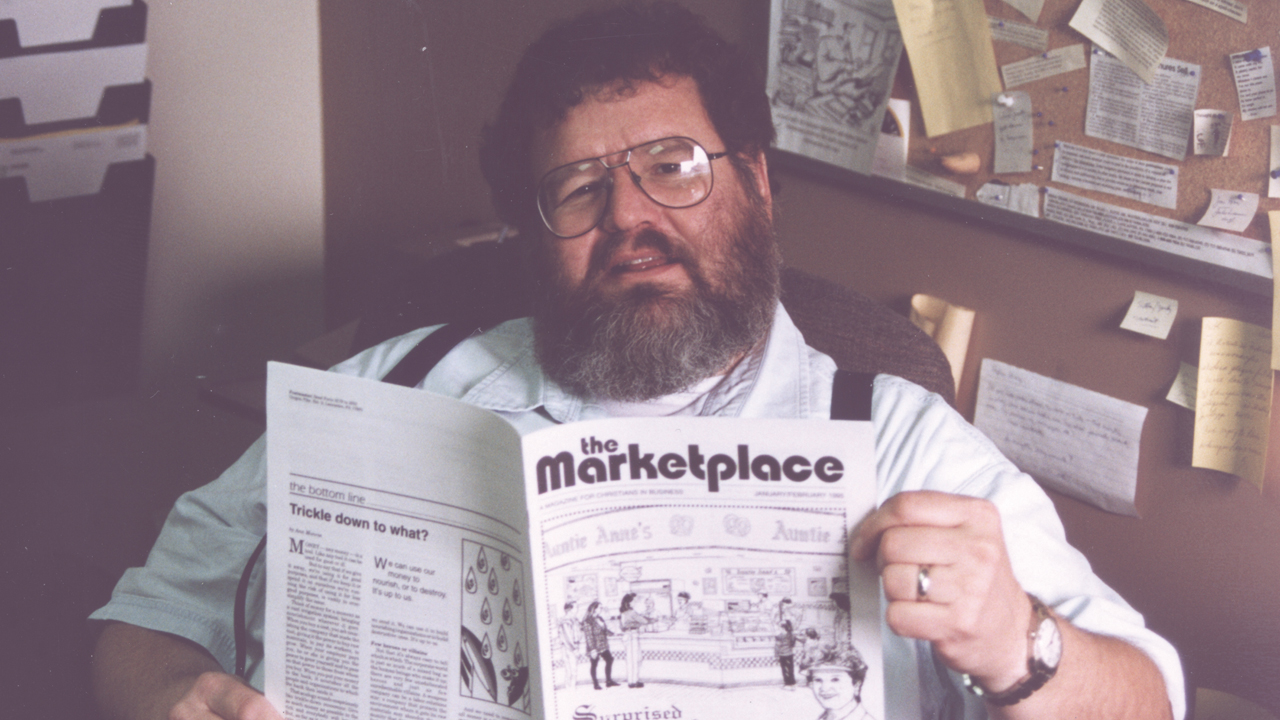 Wally Kroeker checking if any typos appeared after The Marketplace was printed in 1995. — Wally Kroeker

The birth of a new publication is a momentous event. Mennonites in North America can celebrate the appearance of Anabaptist World, as can retired Mennonite journalists whose own callings gain validation from this fresh edition of their species.

New additions to the print family occupy a special nook in the heart of this superannuated scribe. I used to collect first and last issues of magazines for a college journalism class I taught. I had the inaugural issues of People magazine, Today’s Christian Woman, The Post-American (now Sojourners) and The Wittenberg Door, and the final editions of Life, Saturday Evening Post and leading evangelical magazines like Eternity, His and Christian Herald.

It was a joy to read the birth announcements and even the obits as a publication was either launched or laid to rest. The first issues exuded breathless promise and anticipation, the final issues not so much.

Sadly, my collection was destroyed in a basement flood. If I still had it, I would be delighted to add the introductory edition of Anabaptist World. And, of course, the final issues of Mennonite World Review and The Mennonite, which have been spiritual anchors and journalistic models for much of my adult life.

I’ve been in this business for more than half a century, so please indulge my musings about a calling that gave me purpose and sustenance.

In 1967 I fell in love twice, first with Millie, to whom I’ve been happily married for 52 years, and second with the craft of journalism. That fall I joined the Regina Leader-Post as a reporter and began a career that enabled me to love Mondays.

I’ve been a writer and/or editor ever since: Saskatchewan Business Journal, Winnipeg Tribune, Moody Monthly, the Christian Leader (a Mennonite Brethren magazine) and finally The Marketplace, from which I retired in 2017.

As a journalist I enjoyed helping fashion the “first draft of history.” As an editor I delighted to “correct what is corrupt” and “explain what is obscure” (Samuel Johnson). The joys far outweighed the missteps and foibles.

Someone has quipped that doctors can bury their mistakes; architects can tell their unhappy clients to plant ivy, but only journalists are foolish enough to sign their name to their work for all the world to see.

Your friend, the editor

Not everyone knows an editor personally, but we all have a relationship with one, bidden or unbidden. As you read the daily paper or watch TV news, you are subject to the choices of editors. Someone is shaping what you learn about an event or situation.

And that’s really what people want. They don’t want to read a politician’s entire speech. Consumers of news want someone to compress and distill.

An editor has been described as the referee between the writer and the reader. Many great writers had editors: T.S. Eliot needed Ezra Pound to help shape his poetic flair. Ernest Hemingway needed Max Perkins to carve slabs of verbiage from his prose and let it soar.

Here are some things I learned as a reporter and editor.

One: Get to the point. “This is not parallel parking,” one city editor liked to tell reporters. Readers are too busy to wade through yards of text to find the news; they want it at the top of the story. Better yet, they want it summarized in the headline so they can decide at a glance whether to bother with the story or not.

After writing a few hundred opening paragraphs, you learn to get to the heart of a story quickly. Alas, this can become a habit in life. You can become known as a person who forgets that beating around the bush can be a social lubricant. It takes a strong stomach to be an editor’s friend. Or spouse.

“They always get it wrong,” a colleague complained about the media. Defensively, I told him I had never met a journalist who deliberately and knowingly falsified facts. That stunned him. Then I recanted. “Actually,” I said, “I have never known a secular journalist who falsified facts. Church journalists, however, do it from time to time.” He was even more stunned.

I did not mean journalists always get it right. But their mistakes are seldom deliberate or malicious.

When I taught college journalism, I asked students to calculate the number of facts that would have to be processed to make one average day’s edition of our city’s daily newspaper. It worked out to 100,000. Even a 1% error rate would produce a lot of mistakes. Some would be serious, some wouldn’t.

After doing that calculation, my students were surprised at how often journalists actually got it right.

As a denominational editor, I covered many conferences where a million words could be spent in presentations, resolutions and comments from the floor. Afterward I would chisel, compress and burnish the torrent into an article of 2,000 words or less. A conference official praised one such finished article: “You reported it just as it happened. You didn’t edit anything.”

One pastor submitted a manuscript that had some fine ideas but was poorly written. It took hours to massage into shape. “Thanks for not changing anything,” he said later.

Some of an editor’s best work goes unnoticed.

What does get noticed is typographical errors. They sprout like overnight mushrooms, with no whisper or warning. I am convinced some appear only after the periodical is in print. How do you explain to the conference moderator that your editorial meant to say “his comments are worth noting” rather than “his comments are worth nothing”? Church bulletins could also use more editorial finesse, as in “We are so thankful that we have a guest organist this morning.”

Some editors get a rush from critical mail. It makes us feel prophetic and evenhanded. The only hostile letters we don’t like are those that make a valid point.

It is amazing what some people will say to an editor. Some letters drip with venom, then sign off “in the bonds of Calvary’s love.”

“Dear pacifist pukes,” one letter began, then went downhill from there. It didn’t get printed, but I kept it for my files.

One letter was pretty good but had two words that didn’t belong in a church publication. I let the letter run but deleted two profanities. The author called up afterward and complained: “You cut out the best part.”

I said, “You mean to tell me the best parts of your letter were **** and ****?” That led me to formulate Kroeker’s First Law of Editing: “The section you edit out will always, in the author’s view, be the best part of the article.”

You would think editors stay up late carefully searching every article for the best part, then shouting, “Aha, there it is! Strike it out!”

And we still get accused of sensationalism.

I remember submissions that claimed divine inspiration: “God gave me this article; please print it as written.” I knew the writer was mistaken, because God writes better than that.

When denominational editors got together we’d often talk about how much truth we could get away with telling. Some constituents want their periodicals to print only “uplifting” information. But the Mennonite gossip line is such that bad news gets out anyway, perhaps in distorted form.

I have often wondered what it would have been like to be editor-in-chief of the Bible. How would I have handled certain ticklish episodes, like a king who goes berserk (Saul) or a dynamic leader who strays (David)? The Bible faithfully records it all. Battles lost as well as battles won. A doubting Thomas, a denying Peter. Church splits, fights over circumcision. All things an image-conscious church might not want in print.

Many journalists like to think they can save the world, that if only we had more truth about each other, enlightenment and proper behavior would follow. Well, maybe. Our society is bloated with news and information, yet look at us.

One thing I know: Deception has no place in God’s church. After seeing the church in both nakedness and splendor, I’ve learned that the people of God are seldom weaker than when they deceive one another. And they are seldom more powerful than when they’ve been completely overtaken by God’s love and have the gumption to tell the truth about themselves. The same Gospel (John) that says “for God so loved the world” also says “the truth will set you free.”

To the team at Anabaptist World: a fond wish for a vibrant future as you launch this new vehicle into orbit. Yours is a noble calling.