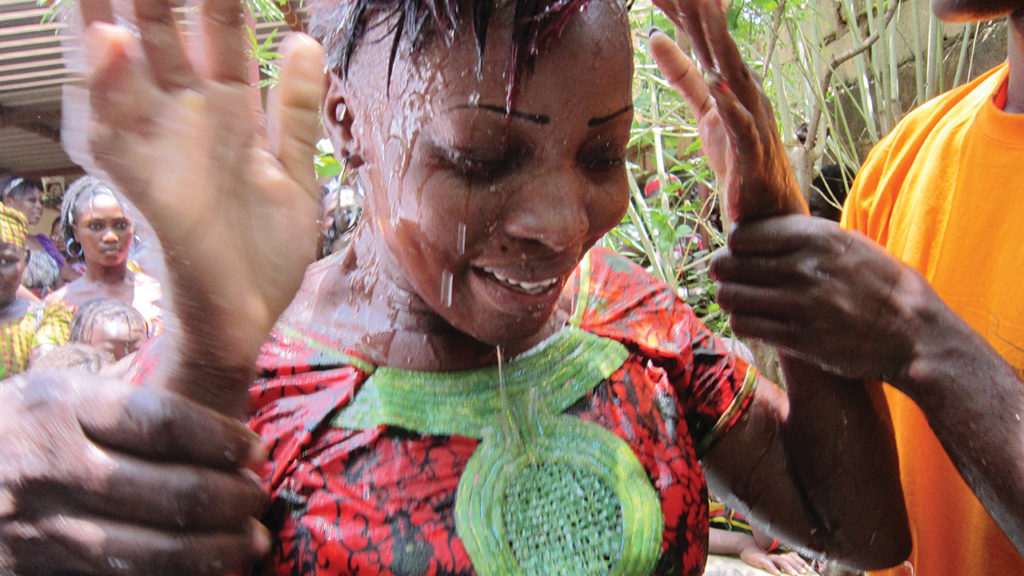 In the 20 years since then, those legacies have intertwined as a single story. Yet MMN’s partnership in God’s work not only reflects two decades of experience. It flows from two streams of Mennonite missions that have spread the word of Jesus and nourished the growth of Anabaptist churches and ministries around the world.

Here, four MMN leaders reflect on how their agency has met the challenges of the past 20 years and positioned itself for the next 20. They tell how:
— postcolonial missions prioritize antiracism, mutuality and humility;
— networking empowers women;
— service programs adapt to cultural change; and
— peacemakers seek to heal a polarized world.

MMN executive director Mike Sherrill says: “Living out a gospel that empowers belonging and wholeness is not only our origin but our guiding beacon for the future.” — Editor

Sharing the good News of God’s love happens best when people are present with one another in mutual respect. I call it “witness as with-ness.”

It’s not a new idea. Jesus didn’t choose who could follow him. He didn’t talk down. He walked alongside everyone.

“Witness as with-ness” speaks to how crucial antiracism and diversity are for Mennonite Mission Network. To walk alongside someone, both must be on even footing.

This is central to how MMN operates, both internally and externally, to dismantle the inequity and racism built into society.

The transfer of mission leadership from North America to Africa is a prime example of a more equitable partnership that has emerged in the past 20 years.

MMN has partnered with Africa Inter-Mennonite Mission in supporting African ministries since MMN was formed in 2002. However, our relationship with AIMM can be traced, through predecessor agencies, back to 1912. In 2004, MMN helped facilitate a huge change within AIMM: moving its decision-making from North America to Africa. The process took three years.

This reimagining of postcolonial mission has forever changed the ministries that AIMM and MMN support together. When followers of Jesus commit to recognizing the gifts that everyone brings to ministry, more just relationships bloom.

MMN’s commitment to antiracism has touched every part of the agency. Over the past 20 years this commitment has changed hiring practices, organizational structure and policies. A team focused on diversity, equity and inclusion meets with executive leadership to keep the agency accountable.

All of this makes more just and mutual relationships possible, both inside the agency and with our partners around the world.

The global Anabaptist church is inviting North American Mennonites to walk alongside them as pilgrims, together in humility, sharing and learning. Congregations are looking to MMN to model “witness as with-ness.”
— Mike Sherrill

Mennonite Mission Network’s predecessor agencies planted churches in many countries. These churches grew and developed their own visions for mission. Today, MMN is a partner in ministries these churches developed.

The “network” in MMN’s name might seem like the most nebulous part of the agency to some. Yet the act of networking, of forming connections, is vital to how we operate. We work with partners, discerning together where their vision of ministry connects with our call. Then we collaborate to carry out the vision.

Two prime examples of relationships MMN has cultivated over the last two decades are 1) the Movement of Anabaptist Women doing Theology from Latin America, known by its Spanish abbreviation MTAL; and 2) the Community of Anabaptist Theological Institutions, or CITA.

CITA’s history stems from networking. Within a short period of time, three separate Latin American theological education programs asked MMN for assistance with virtual education. Instead of responding individually, MMN asked if they would like to brainstorm ways of working collaboratively. Latin American educators facilitated a meeting, and CITA was born in Guatemala in 2016.

In my years of working in Latin America, I remember regional church gatherings in which I was one of only a few women. And most of the others present weren’t representing a ministry but were accompanying husbands who held leadership roles.

Today, at regional gatherings, about half the participants are women. Both women and men are recognized as leaders. MTAL has had a significant role in this change, both in women’s leadership development and in the acceptance of women’s gifts.

On a more local level, it’s encouraging to be able to support 29 Kekchi Mennonite women who teach in their churches. They study Bible and theology in Guatemala, at the Kekchi Bible Institute and with SEMILLA, the Latin American Anabaptist Seminary.

An MMN worker who lifted up the role of women was Deborah Byler, who focused on spiritual growth and leadership development among women leaders in Guatemala for five years until her retirement in 2022. Her work together with Kekchi women resulted in a commitment of support from the church as a whole and contributed to more women serving in key roles and studying to prepare themselves to use their gifts more fully in ministry.

Both MTAL and CITA are coordinated by Latin Americans. MMN participates by encouraging, connecting and sharing financial resources.

Networking and forming partnerships globally grow out of the work of predecessor agencies and their encouragement of local leadership. It demonstrates the value MMN places on the gifts and abilities of others and stands in contrast to a colonial approach, in which a foreign mission agency maintains control.
— Linda Shelly

Even before Mennonite Mission Network was formed, North American Anabaptists’ relationship with service was changing. The draft ended in 1973 and, with it, the need to seek alternative service. As a result, participation in Mennonite Voluntary Service declined, and young people felt pressure to go to college immediately after high school.

In addition, the cost of travel and housing soared in many countries, but the financial situations of churches, youth groups and families didn’t keep pace. The growing cultural expectation that free time and hobbies only have value if they turn a profit has made the idea of taking a week, a month or a year to do unpaid service seem unattainable for some.

And yet, people continue to seek ways to be a part of something bigger than themselves. MMN’s service programs — MVS, Service Adventure, Service Opportunities with Our Partners and Youth Venture — bear witness to this.

Participants of every age connect with local faith communities around the country and throughout the world. The passion to participate in holistic witness to Jesus Christ is strong. The question for MMN is when to shift to better meet that passion.

Youth Venture, the short-term service and learning program for people ages 15 to 22, experienced one of these shifts. The program, which focused on trips to faith communities around the world, had to radically change course during the COVID-19 pandemic. International travel became impossible, so the program shifted to domestic learning and service trips.

The passionate response to these trips — which centered on historic civil rights locations, U.S. and Mexico border communities and connecting with Indigenous peoples — has been a surprise and a blessing. While 2023 marks the return of international trips, MMN will continue to offer domestic Youth Venture experiences as well.

A larger cultural shift, away from community support and toward individualism, has, in a way, helped galvanize the communal support built into MMN’s programs. One aspect of this support is funding: ensuring that participants are not a financial burden to the communities that host them. At the same time, MMN strives to ensure that a financial challenge never prevents anyone from serving.

MMN staff work closely with participants to determine how they can be supported financially. We seek to pair participants and service units with a community of support to make any financial burden realistic. For some participants, this means setting up a donation website to make giving as easy as possible.

We have implemented a Solidarity Fund, a scholarship to assist when most needed. These steps are part of a shift away from service as an experience that a certain amount of money could provide to an act that transforms both guest and host.
— Marisa Smucker

Active peacemaking is the core purpose of Mennonite Mission Network’s domestic and overseas ministry. Peacemaking is why we emphasize antiracism, provide ministry resources to congregations and help train people to plant peace churches.

In my hometown of Brooklyn, N.Y. — one of the most diverse yet still segregated communities in the United States — Brooklyn Peace Church didn’t let the pandemic smother its vision of a renewed peace witness. After a congregation was forced to close its doors, Brooklyn Peace Center emerged in the same location, despite limitations on physical gatherings.

Jason Storbakken, pastor of Manhattan Mennonite Fellowship and leader of the launch team, says they adapted by developing online programming, such as a virtual art gallery and a weekly online webinar series. Brooklyn Peace Church held its first service Oct. 9.

Modeling mutual respect for diverse people answering God’s call is MMN’s “together in mission” approach to peacebuilding. Rebekah York of Elkhart, Ind., serves in Bogotá, Colombia, and connects with Justa­paz, the justice and peacebuilding organization of the Colombian Mennonite Church.

Part of York’s work is with the Women and Peace project, which strengthens women’s roles in peacebuilding. She travels with the project team to various cities in Colombia, holding workshops for women to learn together through the biblical character of Abigail from 1 Samuel 25 and make connections to their own lives.

In South Africa, MMN lends support to partner Oscar Nceba Siwali, founder and director of the Southern African Development and Reconstruction Agency. Siwali trains young people in resolving conflicts. The young people learn to take the lead as peacemakers in their schools, listening to one another and respecting differences.

In the national and international climate of polarization, distrust, hatred and war, the Anabaptist witness of shalom for all of God’s creation has never been more necessary. MMN provides a sacred space of support, connecting diverse people who are willing to step outside their comfort zones for peace.
— Wil LaVeist