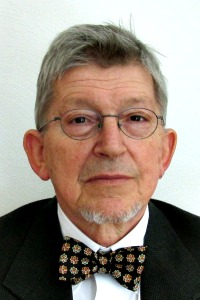 When I retired from Herald Press, the last book I’ve worked on was Theron Schlabach’s biography of Guy F. Hershberger called War Peace and Social Conscience. Also arriving to our offices was Ervin Stutzman’s manuscript on Mennonite peace rhetoric during the 20th century. It seems like a fitting conclusion to my professional life of working for Mennonite institutions.

In the mid-sixties during the Vietnam War, I wrote a student paper on Christian pacifism, drawing heavily on Hershberger’s War, Peace and Nonresistance, and I’m grateful to be a part of a denomination which has been given this gift and to have contributed to it in a modest way. But church life and language are dynamic and already by the end of the 60s decade we had been moving to the language of peacemaking. In the late 60s while in voluntary service in Puerto Rico I led a Sunday school class on a study of “Pacificadores en un mundo quebrantado.” I later learned that it was a translation of a widely used study here in North America “Peacemakers in a Broken World”; the denominational leaders had switched the Uniform Series adult and youth Bible lessons for a quarter to teach this denominational agenda.

Non-resistance had been associated with passiveness (hardly fitting our decade’s romantic notions). And, alas, for an older generation, it had the ring of nonconformity which evoked bishops with their straight-cut coats for men and cape dresses for women. By the time Gloria and I moved to Scottdale, Pennsylvania, in 1970, it did not take long to move from nonresistance to what we considered active peacemaking, often combined with some heady left-wing politics and then to justice.

Justice had been in other religious traditions and political philosophies for centuries, but it seemed so appropriate, new and hopeful to us. I remember reading John Rempel’s “Arena” newsletter with a poignant Good Samaritan essay about what if there were faster donkeys. What a novel idea, and then we remembered that the Ancients spoke of righteousness, and knew that preventing disasters is better than to clean up on them. We became optimistic about fixing the worldly systems, politics, and accepted our generation’s day in the sun such as other nonconformist groups such as the Quakers and the Brethren had theirs.

As with most terms, they can become clichés, and by the 90s, Eastern Mennonite University students were running a “peacenjustice” meter on a professor, noting how many times he could say the term during an hour lecture. At the agency level, the term continued strong. The recent Mennonite Central Committee’s “Recommendations on New Wine/New Wineskins” first page of values and mission priorities had these two words appear nine times: four for peace and five for justice. It claimed newness, but one could also claim it as a consolidation of several decades of agency-speak. Local congregations continued to describe MCC and our Christian service with a considerably greater variety of terms such as the sturdy and authentic terms compassion, generosity, helping, charity, aid, sharing, love of neighbor and acts of mercy.

Not everyone in the church was so keen on our institutional language however, What I discovered in working for the agencies, was that the conservatives were more selective in their language choice, neither jettisoning traditional language nor adopting whatever seemed trendy among the left-wing political and cultural chatterers. When I started working in curriculum in the 70s the traditionals would send us letters—often handwritten and signed sincerely in Jesus—that they did not understand our language.

What I also learned is that the conservatives are very polite; indeed they did understand our language and simply disagreed with our word choices. They preferred to see sin and salvation appear as well as meditation and mediation. But by discreetly saying they could not understand it, they could avoid lengthy debates with an editor like me (we, of course, called it dialogue). They knew very well who would win with that word.

I left publishing for 15 years, and when I returned in the mid-90s the conservatives had refined their strategy even further. When they disagreed with our language choice, they didn’t even bother to write letters or by now an e-mail; they simply stopped buying or affiliating. If conservative Anabaptists wanted some biblical realism or carried some pessimism of human potential (outside of Christ and the church), they could now buy their curriculum from other pacifist Anabaptist publishers in Virginia or Kentucky, or there was always our evangelical cousin David C, Cook. No less in trade books our choices were many, as Anabaptist publishers multiplied and every respectable major (and minor) Christian publisher was offering some Anabaptist themed or authored titles.

But the four decades have ironies. However optimistic we peace and justice flower children were as youth, we lost our liberality on babies. The conservatives remained more hopeful, fruitful and multiplied—and eventually those trends influence the church membership and Sunday school attendance. Even as the 70s Sojourners phenomenon and Anabaptist camp followers emerged, they loved our theology in the abstract best. The closer they got to real Mennonites, their ardor cooled.

They often came to us from the academy (reading John Howard Yoder) or deeply steeped in evangelical doctrine but missing the Anabaptist ethical components. They became dismayed when heartland Mennonites did not sufficiently emphasize what they were searching and even more disillusioned when they discovered that we weren’t all justice-seeking socialists. They often reminded me of the village outlaw who was converted at a mid-century revival, and found the rest of us home-grown Mennonites lacking in fervor.

In our peace and justice language choice, we now fit a variation of the old joke of the New York Jews voting like Puerto Ricans. Mennonites lived like the Episcopalians but we sang like the Sandinistas. In market terms it was our niche, and what’s wrong with maximizing it. We were known in the larger religious marketplace for our peace emphasis. We made a tremendous contribution to the literature and practice of mediation and conflict management; it has been a growth industry.

But even a market definition is not without its limitations, if for no other reason than it it the outsider who is defining us, rather than we defining ourselves as a Christian and Anabaptist church. I recall a pastor telling me during my younger years why we should publish a full Anabaptist Christian diet for congregational life and ministry. “People do not die on peacenjustice,” he reminded me. He reminded me of Christian conversion, community, discipleship and our hope in the resurrection.

His comment also reminded me of our history, our legacy from the Anabaptists of persecution and martyrdom, the nineteenth century of humility and the land, in the 20th century on revivalism, nonresistance and peace and justice. Okay, you have your own set of terms, and I am grateful the Anabaptist Mennonite denominational stream has chosen these distinctions. All healthy congregations, denominations and their agencies do define themselves; it’s a part of eliciting loyalty and commitment, and alas it also alienates as we experienced during my life, the conservative exodus.

Still, we do not die or live only by our era’s distinctions but also by the evangelical confessions we share with all confessing Christians. I’m confident that our 21st century spiritual children will choose terms for our Christian stream of history (even eclipsing peace and justice) in the next century. And I’m confident or at least hope that they’ll also remember the words of that pastor.