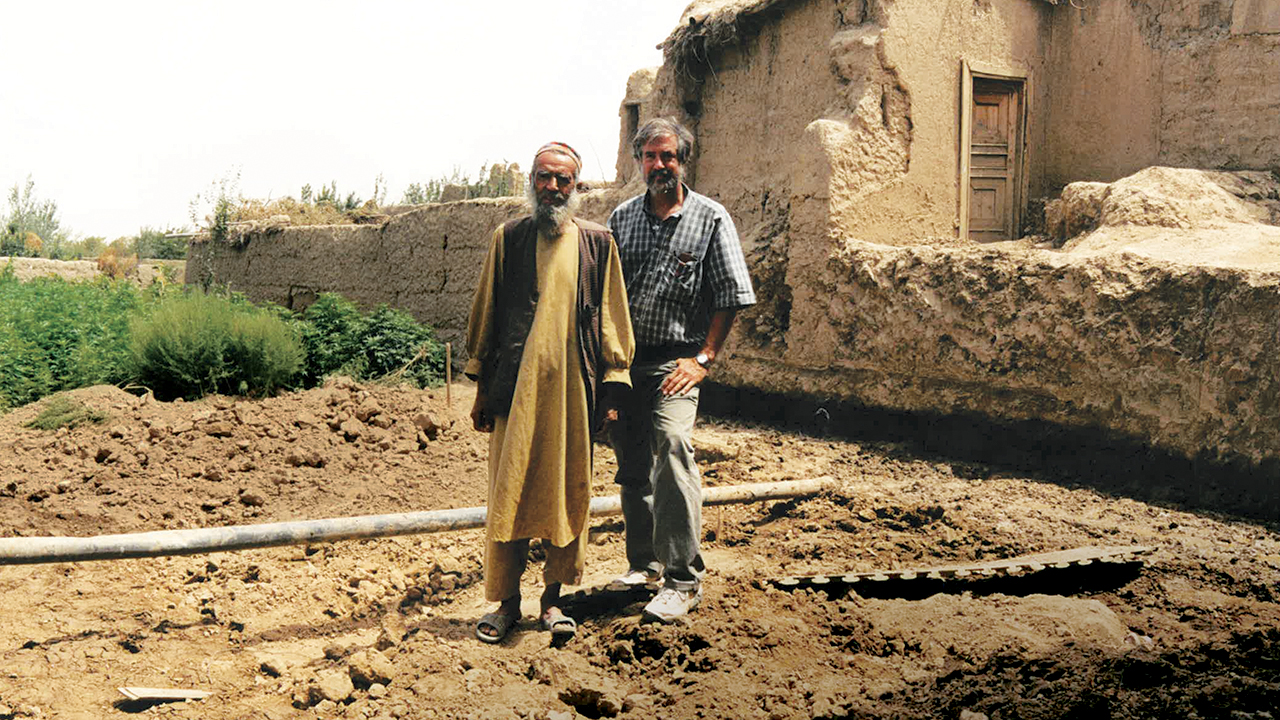 Abdul Hadi, pictured with Doug Hostetter in August 2002, returned to his home in Qala Kuja, Afghanistan, three years after it was destroyed in fighting between the Northern Alliance and the Taliban. Mennonite Central Committee and Church World Service helped him rebuild. — Doug Hostetter

When I arrived in Afghanistan to deliver humanitarian aid seven weeks after 9/11, the first question an Afghan farmer asked me was, “Why is the U.S. attacking our country? Your government was so helpful when we were occupied by the Soviet Union. We thought America was our friend.”

Fumbling for a response, I said, “A group of militants, from an organization with headquarters in your country, destroyed two buildings a half kilometer tall in New York City, killing almost 3,000 people.”

He looked confused. This appeared to be new information. We were in Kunduz, a province with no electricity, running water or paved roads, where the tallest building was one story high.

Twenty years later, people still are asking questions about the U.S. military response to the terrorist attacks of Sept. 11, 2001.

Many of these questions center on the impact of U.S. military action and the consequences of the 20-year war. Many Americans understand the U.S. did not win the war, and they question its high cost in blood and treasure. But they might not know what other choices their country might have made.

In Afghanistan, and earlier in Vietnam, I have seen the futility of war and the power of compassionate assistance to restore hope and build friendship.

My reflections on the 20th anniversary of 9/11 are informed by my convictions as an Anabaptist Christian, service with Mennonite Central Committee in Vietnam 50 years ago, conversations with Afghans 20 years ago and my role as MCC liaison to the United Nations from 2006 to 2018.

The U.S. invasion of Afghanistan, and the 20 years of war that followed, have had profound and disastrous effects on the U.S. and Afghanistan. By making war, the U.S. turned a country whose people thought Americans were their friends into an enemy.

For many Americans, the logic of the Afghan war was clear: As the innocent victim of an unprovoked attack, the U.S. had to retaliate. On closer examination, things get a bit messier.

It is true Al-Qaeda militants based in Afghanistan hijacked the planes that destroyed the World Trade Center and struck the Pentagon. But the hijackers were all Arabs, mostly Saudis, with not a single Afghan among them. Given Al-Qaeda’s secrecy, it is highly unlikely the Taliban leadership of Afghanistan even knew the 9/11 attacks were going to happen.

When it was determined that ­Al-Qaeda carried out the attacks, the U.S. government demanded Afghanistan immediately arrest or expel Al-Qaeda leaders.

The Afghan government requested a few weeks to organize a Loya Jirga (grand assembly of Afghan traditional leaders) to make that decision. The U.S. refused and responded militarily with massive bombings followed by ground troops.

The war was a blatant violation of the United Nations Charter and international law. The U.S. chose not to bring the matter to the U.N. Security Council but instead to initiate a war with NATO allies.

The attacks of 9/11 were serious crimes that should have brought decisive responses from law enforcement. Had the U.S. responded through INTERPOL, the international police organization, most nations would have given their support. Russia, China, the European Union, the United Nations and even most Muslim countries would have joined the effort to bring the 9/11 criminal plotters to justice.

Instead, the U.S. alienated the Muslim world, and many of our allies, by starting a war that resulted in more than 241,000 deaths, including 2,400 U.S. service members.

As the most powerful country in the world was preparing to attack the poorest country in Asia, I contacted MCC and the American Friends Service Committee to ask if they would join with a previously planned October trip to deliver food to Afghanistan. A small Afghan American organization, Help the Afghan Children, had organized the trip.

MCC and the AFSC agreed. They asked if I would represent them and accompany the organization’s director, Suraya Sadeed, to deliver food to displaced people in northern Afghanistan.

Sadeed played a key role in a story of compassionate ministry to Afghan people who suffered great tragedy due to the U.S. war.

She and her husband had emigrated to the United States in the late 1970s as the Soviets invaded Afghanistan. A decade later, after the Soviet defeat, she returned to Afghanistan and discovered great need. She came back to the U.S., started a small charity and returned regularly to assist children.

I asked Sadeed how she could work in Taliban-controlled Afghanistan. How was it possible to have a medical clinic for women and girls in Kabul?

“There are good people in every country, every religion and even every political organization,” she responded. “I found a Taliban leader I thought I could trust. I asked, ‘What would you do if your wife or daughter had a difficult pregnancy?’ ”

He responded, “I would pray to God.”

“Yes,” Sadeed told him, “but there are professionals who can save lives in childbirth.”

“We could never allow a doctor to see a woman during childbirth,” he responded.

(All female doctors had been dismissed when the Taliban took over.)

When she promised to staff the clinic only with women, he agreed.

Then, in an instant, years of work was undone.

Just before we entered Afghanistan, Sadeed learned that chief pediatrician Dr. Belquis, internist Dr. Rahma and a registered nurse from the clinic were all killed in the U.S. bombing of Kabul.

Friendship and hope can be fostered through love and compassion — or destroyed in an instant by the weapons of war.

Positive change cannot be imposed by outsiders, but culturally sensitive assistance can make a difference. With funds from MCC, the AFSC and my family and friends, I was able to collect $60,000. Together with $70,000 that Help the Afghan Children collected, we were able to bring $130,000 to neighboring Tajikistan. There a supplier would convert our funds into 239 tons of wheat, sugar and cooking oil, which was loaded on 19 trucks and brought across the northern border into Afghanistan.

Sadeed and I traveled ahead. A few days later in Afghanistan, our supplies caught up with us. Afghans who had fled the U.S. bombing further south warmly welcomed us. We had enough supplies to feed 3,600 families of seven for one month.

As the U.S. withdraws its last combat troops, some will say the military must remain so Americans can build schools, modernize the country and protect Afghan girls.

Despite the rhetoric of politicians, wars are fought for material and strategic reasons, never for development, education or human rights.

From years of working in a war zone (I served three years with MCC in Vietnam at the height of that war), I have learned the military does not have the right equipment or training for nation building or the empowerment of women.

The U.S. has been in Afghanistan for 20 years. We have sacrificed the lives of thousands of U.S. service members and contractors and tens of thousands of Afghan civilians. Yet most Afghan people’s lives are worse today than when the U.S. invaded two decades ago.

Change in Afghanistan will need to be led by Afghans, not by foreigners whose weapons have caused great suffering and claimed many lives. Social change must be driven internally, not imposed through military occupation.

Eight months later, in 2002, when it was safe to travel to Kabul, MCC asked me to return to Afghanistan to visit a home-rebuilding project in Parwan Province. MCC was working with Church World Service to rebuild Afghan homes destroyed by war.

I met again with Afghans who had lost everything in the war. Once again, people welcomed me warmly as I brought a token of hope from people who believe love is stronger than vengeance and nonviolence a better choice than war. 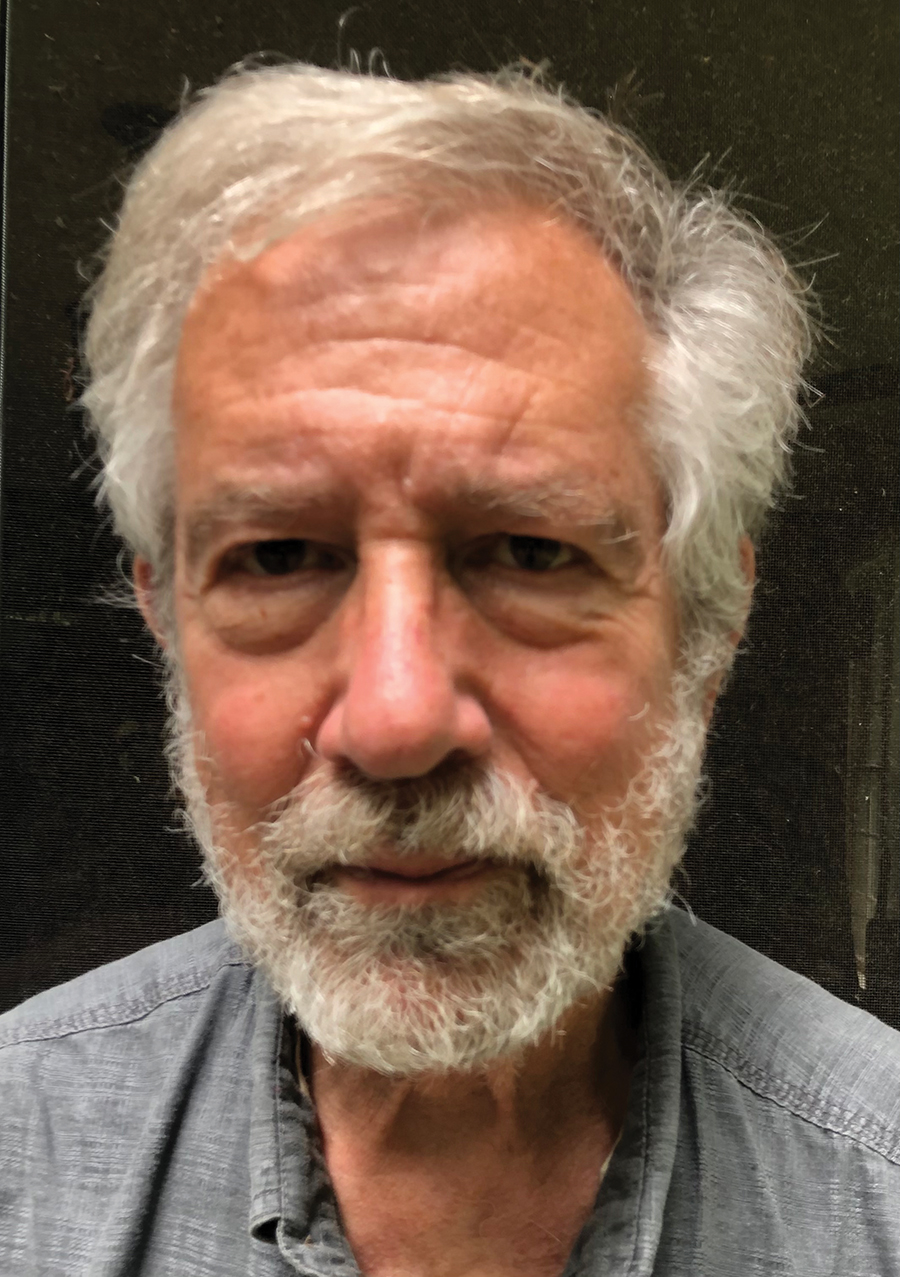