I’ve been reading the thread of comments in response to Anabaptist Ghosts, Part 1: Social Advocacy and Confrontation. I’m writing a blog post in response because I think the concerns shared in the comments by Aaron Kauffman and Harold Miller are shared by others as well and need to be addressed.

As I understand them, one of the key arguments that Kauffman and Miller are making is that my focus on social advocacy and confrontation is “cutting [me] off from any word of wisdom that other parts of the Body of Christ might have to offer.” In other words, their claim is that the haunting social advocacy and confrontation, as I am describing it, does not leave room for dialogue.

Let’s start by taking a look at what we mean by dialogue. One of the important passages used by Mennonite mediators is Matthew 18:15-17. But there’s a bit more to these instructions for handling conflict than meets the eye. In chapter one of the Mennonite Conciliation Service (MCS) mediation and facilitation training manual (fourth edition), restorative justice practitioner Elaine Enns points out that the broader context of Matthew 18 speaks clearly to the way power imbalances affect relationships:

In verses 6-10 Jesus further dramatizes the issues of power and vulnerability with a series of exhortations warning the disciples not to “scandalize” (take advantage of) the “little one”(literally the “tiniest”). Whether our exercise of power is redemptive or abusive will be determined by our treatment of and relationship to the weak and marginalized. (p.23)

Jesus was making it clear that dialogue takes place in a context of equity and justice. Equity and balance between parties in conflict is a prerequisite for conciliation and resolution of conflict. In Enns’ 9 principles of Restoration, the first principle is: “We need to do a power analysis. We have to look at how social power is distributed in our communities and society”

In the Mennonite church, power has been systematically taken away from gay, lesbian, bisexual and transgendered people. With the case of Randy Spaulding, we see this pattern continuing at both the conference and national level.

As long as one party in a conflict is systematically marginalized, disempowered and dismissed, dialogue leading to meaningful conciliation cannot take place.

Confrontation and mediation: there’s a framework for that

“…nonviolent advocacy and mediator roles overlap, complement and, more importantly, are mutually dependent. Negotiation becomes possible when the needs and interests are articulated and legitimated. This most often happens through confrontation and advocacy, which translate into a recognition of mutual dependence [emphasis added] (p. 87)

Lederach uses a model from Adam Curle to look at the role that confrontation plays in moving conflicts from balanced to unbalanced: 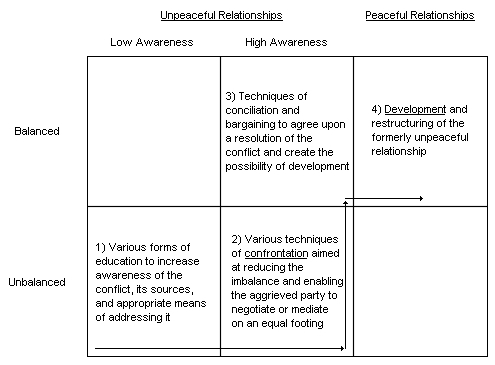 The purpose of our direct action program is to create a situation so crisis packed that it will inevitably open the door to negotiation. I therefore concur with you in your call for negotiation. Too long has our beloved Southland been bogged down in a tragic effort to live in monologue rather than dialogue.Letter from a Birmingham Jail

In the context of the Mennonite church, there has been a long-running monologue about inclusion of gay, lesbian. As long as LGBTQ Mennonites, like Spaulding, are kicked out, we can be sure that “the discernment of the church” will continue to support the exclusion.

Despite all this, I am continually amazed how graceful and loving LGBTQ Mennonites can be in response to hostility and malice . For example, in his comment on an article on Pink Menno after the Colombus convention in 2009, John Troyer accused Pink Menno of “arrogance,” untruthfulness and subterfuge. And then he evoked the stereotype of gay men as predators that has been used so destructively over the decades: “I mourn the way Pink Menno preys on children and youth to accomplish its goals.”

Even as a straight man, I find Troyer’s words infurating. And this is just one digital example of the bullying and personal attacks that also took place in person during the Colombus convention. Yet, again and again, I saw Pink Mennos engaging respectfully in ways that de-escalated and invited conversation. Troyer’s comments were no exception. I will leave you with the thoughts that Luke Miller, Pink Menno leader, offered Troyer in response. For me this excerpt speaks to the heart of the questions that Kauffman and Miller raised:

The goals of Pink Menno are clearly laid out and include gay membership, marriage, and ordination in the Mennonite church. But we also call for greater openness in the church to reach true dialogue so we can acknowledge and work with/live with our differences. I understand why you might be confused about the tension between these two ideas, but I can assure you there is no “dishonesty” present. The first are “ultimate” goals–that is, our vison of where we believe the Spirit is leading the church in an ultimate sense–but a place that can only be reached by everyone working together in the Spirit, not by any one side “forcing” its view on the other (as if we could ever possibly have the power to do that.) We know that it will take the church a long time to reach this place, and there will be many intermediate steps, and that along the way there will continue to be a great amount of diversity and disagreement. It’s the tension between being prophetic on one hand, and pastoral on the other.