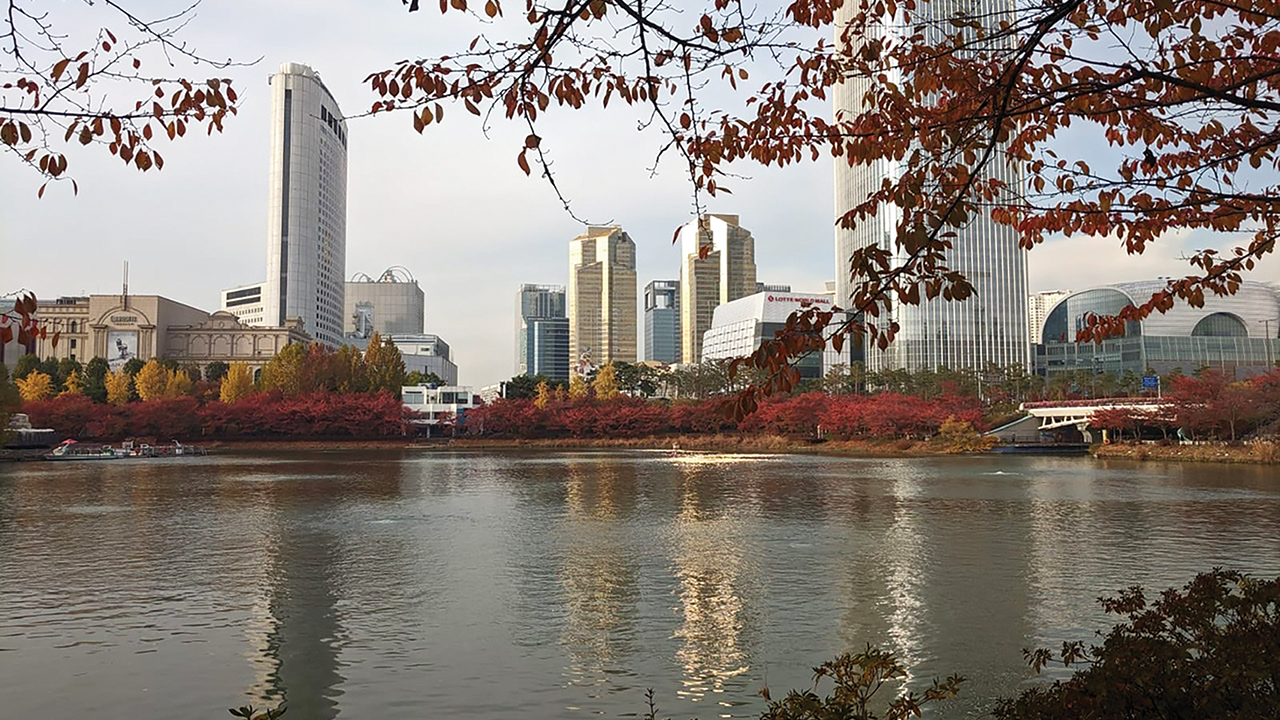 Skyscrapers of Seoul, South Korea, rise behind Seokchon Lake, south of the Han River, which bisects the city. The Lotte Tower, at right, is the world’s fifth-tallest building. — Lane Miller

Inside the basement door of the oldest Anglican Cathedral in Seoul, South Korea, just down the hall from the bathrooms, is a narrow foyer above steps that lead past the organ into a small crypt studded with 18-inch-thick stone columns. Midway through the liturgy, chairs scrape across the floor as congregants jostle into the aisles to join hands in the passing of the peace.

My wife, SaeJin, and I found ourselves in their midst while settling into a new life south of the Han River, which bisects the city. Our former home, south of the Elkhart River in Indiana, sat pastorally on a latitude just north of our new one. Our starkly different past and present quite literally straddled the 38th parallel.

While our home congregation, Hively Avenue Mennonite Fellowship, continued gathering weekly in the warm brick sanctuary where we’d been nourished for many years, in Seoul we were thrust into the spiritual cold. Longing for familiarity, we set out to find a new community.

This basement English gathering is a refuge for those minority members of Korean society that don’t fit well in the Korean service going on above. There are British English teachers, an Irish seminary professor, an American newspaper editor, a retired New York banker, a Nigerian factory worker, a Tanzanian computer programmer. Numerous tourists visit as they pass through the city. These are not the meek of society. Native English ability bestows a certain status. Though small, the congregation offers a reprieve from the cultural difference that dominates the daily weekday living of the foreigners there.

The liturgy is unlike our Mennonite service, but I am touched by the portions that remain the same — a reminder, maybe a remnant, of the broader Christian tradition we all share. Like our home church, they too reach out their broken hands to offer what is only Christ’s to give.

We’re not in seminary anymore

I graduated from Anabaptist Mennonite Biblical Seminary in 2013, but six years later I’d never really left. Its staff went to my church. Its students continued as friends. It was not until leaving a local pastorate for secular work in 2017 that I really made my first non-Mennonite friend as an adult. He was a smart atheist Ivy Leaguer tailor-made for his hedge fund job and a fair, amicable conversationalist.

Despite his atheism, our conversations routinely turned to religion. He was surprised that Christian theologians have wrestled with racism, sexism, colonialism and the climate crisis. Like many post-Christians of my generation, he rejected faith over the tradition’s record on such issues. I’d heard his story before and routinely expect a scientific rationalist critique of religion.

Seoul was an entirely different meeting of minds. Upon making a new friend in Korea, I was taken aback to discover his world had not been secularized. In fact, he was rather studied in paganism and New Age thought. I stumbled to articulate myself, eventually realizing that moral values were not where we’d find common ground, but in religious practices themselves. We discussed meditation, the narratives that structure belief and the need for peace inside ourselves.

Some weeks later at a book club meeting in a bar, I did find post-Christians, but also a Jewish Buddhist and a rather fundamentalist Christian. Attempting to mediate between parties who were talking past each other, I kept mum about my own religious identity.

In a smaller gathering afterward, I was less circumspect. One member suddenly exclaimed, “You’re a theist!”

That began a lengthy discussion on what the Bible really says and what he’d thought it said. It was clear the man had deep wounds and was prone to lash out. Carefully responding to his questions with patience confused him. He finally retorted, “What’s your thing, man? You just go around knowing all this stuff about Christianity without converting anyone?”

Though not attempting conversion, I confessed confusion. I’d been outlining my beliefs to him for nigh unto an hour, at minimum a precondition of the evangelizing against which he was so defensive. A less aggressive and temperate Christianity than what he’d previously encountered settled his vitriol, and he asked to meet again. It seemed some peace had been passed in the unlikely sanctuary of a drinking hall.

Back to the crypt

On Sundays we retreated back to the scattered seats between the columns. The center aisle has a golden inlay of St. Peter. In each corner of the metal slab is etched one of the four creatures from Revelation. A golden tabernacle behind the altar houses the host, a physical reminder of the Word made flesh. Millennia of meaning are stored within these symbols. We are settled into the living history of the church through the service. As the Nicene Creed is chanted again into this catacomb of history, the past and present kiss.

The Korean man behind me today is especially tall, and fit. There’re many ethnic Koreans at the service. His physique aside, it’s little cause for note. The man ahead of me is Caucasian, short, dressed casually in jeans and a leather jacket. “That’s him,” SaeJin whispered. I recognize the trademark handlebar mustache. It’s the U.S. ambassador.

Ruminating on the ritual

I’m not used to touching ambassadors or bodyguards. Paul appealed to Caesar; I write my congresswoman. There is nothing wrong in contact with political power. But I don’t give her the peace of Christ. I give her a piece of my mind. And I often want to give the same to those overseeing the U.S. relationship with South Korea.

Still, the reluctance in my handshake surprised me. I openly shared the peace of my faith with professed unbelievers. But with a man who shares that faith — albeit with a different politics and a suspect vocation — peace seemed almost a compromise. Whenever we stood for the practice in the weeks to come, I sought out the ambassador. It seemed by passing the peace I might change international relations. In reality, I hoped the practice might change me. To accept the peace means to pass it.

The pandemic cut our time in Seoul short. As soon as those new relationships began to bud, they seemed lopped off my life. Now settled in Chicago, it has been months since I’ve shaken hands or passed the peace with another member of our body. Sundays are spent on the couch rather than in the crypt.

Some weeks ago, I received a text from the friend who studied paganism. He wanted a recommendation of a Bible to buy. He felt a need to examine Christianity after much avoidance since childhood. My summary of various translations led to a purchase, then myriad questions on Genesis. Then John. Now I’ve recommended Luke.

God is working in his life; I’m overjoyed. I’ve prayed, haltingly, for exactly this. Still, I’m surprised. Most prayers are less readily answered. Perhaps prayer is not the sole cause. I suspect I passed him the peace without ever touching his hand. Our practice in church — freely offering peace whether our hearts are ready or reluctant — prepares us for encounters outside it.

In the pandemic, most encounters are less frequent or full of caution. This is difficult and can feel like a spiritual winter. There are no hands to shake in this season. Still, I’m encouraged that, though our practice is paused, it continues to bear fruit. The past and present are not so starkly divided. The peace of Christ still wends its way in the hearts it has touched. May it find its way in yours.

Lane Miller is a financial analyst and investment manager in Chicago. A 2013 graduate of Anabaptist Mennonite Biblical Seminary, he was formerly pastor of formation and worship at Kern Road Mennonite Church in South Bend, Ind.