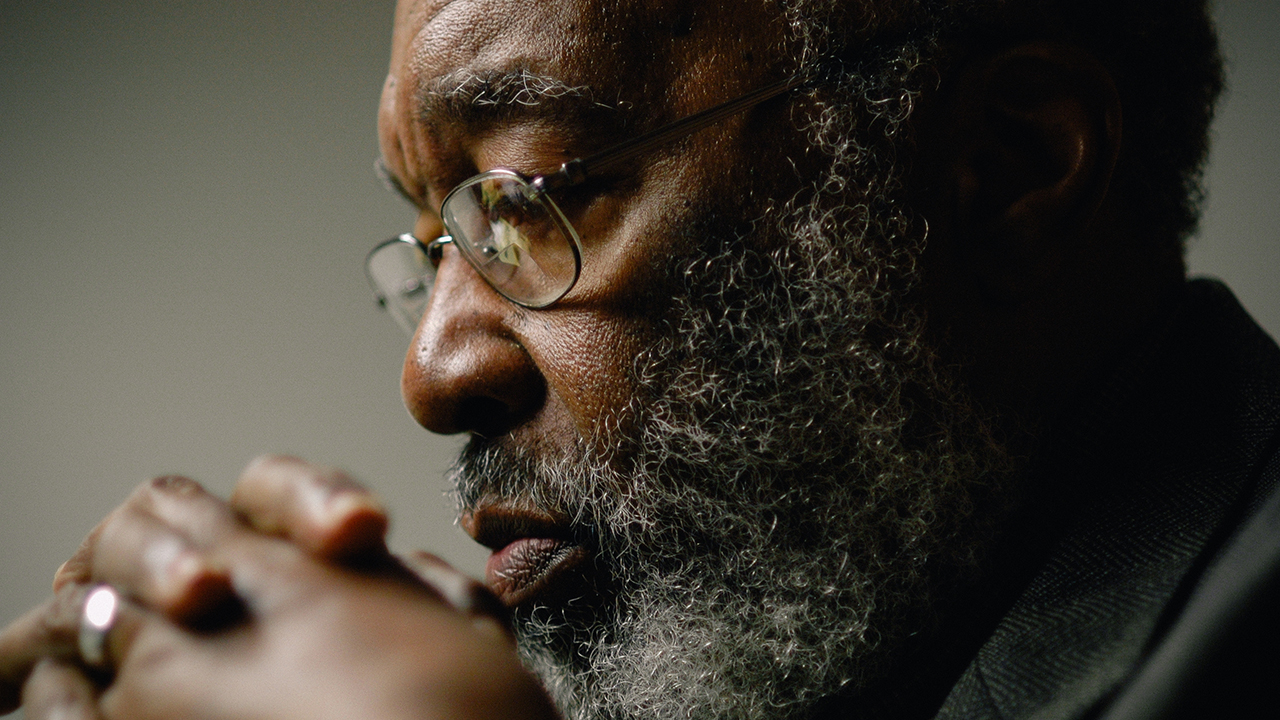 Vincent Harding in 2006. “The fear that is deeply ingrained now in white America is the fear of not being able to set the agenda anymore,” he said in 2011. — Ryan Rodrick Beiler/Sojourners

In July of 1967, Vincent Harding — a Black Mennonite and colleague of Martin Luther King Jr. in the Southern Freedom Movement — gave two provocative speeches at the eighth Mennonite World Conference assembly in Amsterdam. He was one of the few nonwhite participants and one of a very few people of color who spoke from the stage.

In “The Beggars Are Marching . . . Where Are the Saints?” Harding asked, “Mennonites, Christians, [people] who love humanity, where are we? If . . . Jesus is our guide to life, where are we?”

Are Mennonites marching with the revolutionary beggars in the streets, he asked, or are we “huddled behind the barricades of the status quo, praying the storm will soon be over so that life can continue undisturbed?”

In 2021, this question still rings true, as we encounter the deadly upheaval of the COVID-19 pandemic with the glaring economic disparities it has exacerbated, along with the surge in far-right domestic terrorism. This is a moment that demands societal transformation, not a return to business as usual. This is a moment to turn away from an exploitative economic system and lethal white supremacy. This is a moment for revolutionary movement, much like the situation in the 1960s.

Four months prior to the MWC assembly in Amsterdam, Harding had penned another speech that sent shock waves through the nation. That speech, “Beyond Vietnam: A Time to Break the Silence,” was delivered by Martin Luther King Jr. on April 4, 1967, at Riverside Church in New York City. King asked Harding to draft the speech because he knew that they were of the same mind about the war in Vietnam and that Harding also understood his pastoral heart for the nation.

King’s calling out of racism, militarism and materialism (capitalism) put him at odds with many of his former allies, and public opinion turned against him. A few months after the speech King called up Harding and said, “Vincent, you see what kind of trouble you got me into!”

The power of the “Beyond Vietnam” speech echoes through Harding’s addresses to the global Anabaptist body gathered in Amsterdam. With historical clarity and prophetic urgency, he called on Mennonites to take seriously the anger of revolutionary movements around the world and to understand the complicity of white Western Christians in the suffering that sparked the revolutions.

In his second speech at the MWC assembly, “The Peace Witness and Modern Revolutionary Movements,” Harding said that before Mennonites judged the violent tactics of the Black Power movement or the National Liberation Front of South Vietnam or the revolutionary movements in Peru and Colombia, Mennonites needed to go and spend at least six months with these revolutionaries. Mennonites needed to hear their deepest concerns, learn what it felt like to have one’s back up against the wall and then decide if the peace witness had anything to offer.

“What is our peace witness,” he asked, “when we live as citizens of the nations that make peaceful revolution impossible? We cannot escape such questions by saying that we do not believe in violence when we participate in the violence of the status quo.”

Along with King, Harding was deeply committed to nonviolence and wanted to see Mennonites take it seriously or stop claiming it.

An invitation from King

Harding first came to his convictions about nonviolence 10 years prior through his connection to Mennonites. He was in graduate school at the University of Chicago where he had a class on the history of Christianity and was impressed by the witness of the early Anabaptists.

Not long after that, at the university library, he met Elmer Neufeld, who was in leadership at Woodlawn Mennonite Church. Neufeld invited him to Woodlawn, an interracial congregation, and Harding became a co-pastor.

Within a year or so of Harding’s connection to Woodlawn, he first met King in Montgomery, Ala., along with four other men from the congregation. Two of them Black and three white, they decided to take a trip through the South to learn about the freedom struggle.

At the end of their visit in Montgomery, which happened in King’s bedroom, since he was recovering from a stab wound, he said something that profoundly impacted Harding. Looking at Harding and Ed Riddick, the other Black man on the trip, King said, “Now you guys, you’re Mennonite and you know something about nonviolence. You understand what we’re trying to do down here. You ought to come back down here and help us.”

Although not immediately, Harding responded to that call. In 1960 he married Rosemarie Freeney, a member of Bethel Mennonite Church in Chicago and a graduate of Goshen College. Both Rosemarie and Vincent felt the call to join the movement and to see what a Mennonite peace witness had to offer. In 1961 they became the first Black directors within the Mennonite Voluntary Service program and started Mennonite House in Atlanta.

Young people, both Black and white, came to live at the house and volunteer with movement organizations in Atlanta. Mennonite House was also a place of hospitality for movement veterans in need of respite like Fannie Lou Hamer and Septima Clark.

In addition to facilitating Mennonite House, the Hardings served the movement by reaching out to white people who wanted to get involved. Andy Young, who was on staff with the Southern Christian Leadership Conference, or SCLC, thought they would be less threatening since they were Mennonites and not officially connected to any movement organizations. At the time, Rosemarie regularly wore a Mennonite prayer covering.

Mennonite House was the first interracial communal-living effort in Atlanta — and just around the corner from where Coretta Scott and Martin Luther King Jr. lived. These two young couples supported each other in their movement work. “And sometimes,” Harding said, Martin and I “were just two short guys, at 5’8” and 5’9”, trying to play basketball at the SCLC retreats.”

During this time Harding was also speaking in Mennonite contexts and writing for Mennonite audiences about the importance of getting involved in the Southern Freedom Movement. Some Mennonites were wholeheartedly in agreement, while others seemed more interested in having Harding as “their Negro,” as he put it, than in actually heeding his words. Still others were adamantly opposed to Mennonite involvement in the movement.

In 2011 I had the honor of doing an extended interview with Harding about his formation among Mennonites and his participation in the Southern Freedom Movement. In the years that followed, until his untimely death in 2014, we had the opportunity to interact on a number of occasions. He was an important teacher in my life and became a touchstone as I developed in my advocacy for justice in Mennonite institutions and beyond.

As a historian and a pastor, Harding understood the impacts of the persecution and violence Mennonites had experienced. He understood that being the “quiet in the land” kept Mennonites safe, as did obeying the powers that be.

“They saw whiteness as a protection from conflict and confusion and difficulties,” he told me, “and chose not to come out from under that protection.”

He understood all this, and he expected more. Harding was calling Mennonites to integrity in their peace witness. He expected that the persecution European descent Mennonites had experienced would compel them to come alongside their Black sisters and brothers in the freedom struggle. He expected it could help them to come alongside the many revolutionary movements around the world. This was the challenge he posed at the MWC assembly in Amsterdam.

But generally that was not the response from white Mennonites. There were outliers who got involved in the Southern Freedom Movement, but, by and large, white Mennonites and Mennonite institutions stayed on the sidelines.

If you believe in peace, he said over and over again, you need to be in the streets. You need to put your bodies on the line, like Jesus and like your Anabaptist forebears. He called for systemic change at a time when the Mennonite church could only accept him as “their Negro.” He was allowed to be present but was not allowed to set the agenda, since his perspective was “too radical.”

As Harding’s Black consciousness deepened, he recognized the dangers of being somebody’s Negro. He felt it was important for him to move more deeply into Black community spaces. Among Mennonites there was no space for him to explore his Black identity.

He knew that some Mennonites experienced this as rejection, while they also were unaware of how Mennonite identity at that time was steeped in whiteness.

He reflected, “I had to depend on the fact that those with whom I had really developed a deep, personal, loving connection would understand . . . and would not feel that they had to keep some kind of grip on me.”

After King’s assassination, Coretta Scott King asked Harding to become the first director of the King Memorial Center in Atlanta. Soon after accepting that role, he also founded the Institute of the Black World, an organization committed to creating and defining the field of Black Studies.

In this leadership role, he brought together diverse Black scholars, artists, writers and organizers who often were not in agreement with each other. But this was not a cause of concern. Harding knew relating across differences was the crucible for transformation.

What needs to be burned away?

Would Harding be deterred by the sober realities we’re facing today? I do not think so. I think he would be grieved and angry, but not surprised. As a historian, he knew intimately the capacity of white supremacy to terrorize.

His words from 2011 ring true in light of the recent violent takeover of the U.S. Capitol building: “The fear that is deeply ingrained now in white America is the fear of not being able to set the agenda anymore and having to work out some kind of collaboration — real collaboration that would require everybody to make adjustments.”

So where are we Mennonite Christians? If Jesus is our guide to life, where are we? Are we now able to rise with the revolutionary beggars? Or are Mennonites of European descent, and Mennonite institutions, still hiding behind the barricades of the status quo?

What needs to be burned away among Mennonites so that we can heed Vincent Harding’s enduring call to follow Jesus?

“The beggars are marching,” he preached in 1967 to the Mennonites in Amsterdam, “and Christ is in their midst.”

Joanna Lawrence Shenk is associate pastor at First Mennonite Church of San Francisco and the author of The Movement Makes Us Human: An Interview with Dr. Vincent Harding on Mennonites, Vietnam and MLK (Wipf & Stock, 2018).