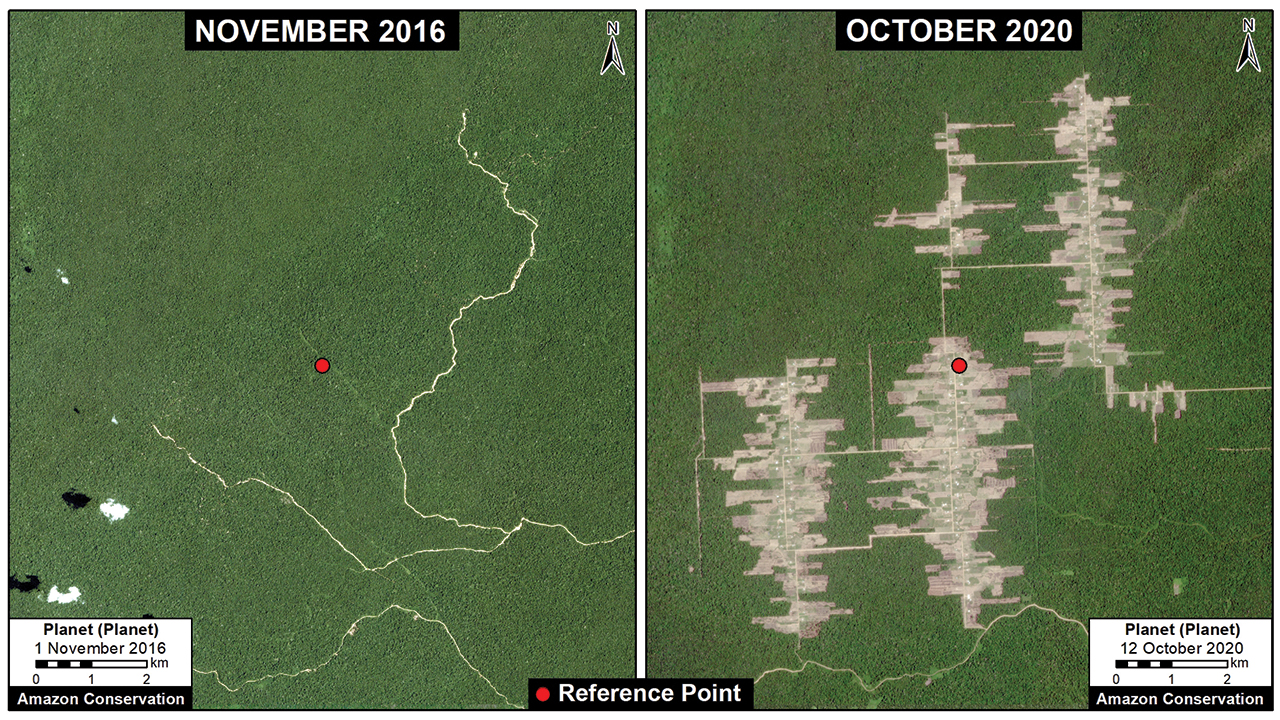 Deforestation totaling 5,370 acres has taken place between November 2016 and October 2020 at the Mennonite colony of Tierra Blanca 1 in Peru. — Monitoring of the Andean Amazon Project

About 40 Old Colony Mennonite families in Belize are making plans to migrate to Peru, drawn by agricultural opportunities abroad and frustration with government bureaucracy at home.

Breaking Belize News reported Oct. 31 that members of Shipyard Colony in Orange Walk District could move to Tres Cruces, Peru, as soon as borders are reopened. The Shipyard group was considered more conservative than other colony Mennonites in Blue Creek or Spanish Lookout.

These issues were magnified when Martinez and nine others from the colony were delayed from re-entering Belize for nearly three months after scouting land in South America. They ultimately were assisted by Mexican authorities to travel to Mexico and stay there for nearly a month before negotiating with Belizean officials to cross the border in August.

In a separate incident, seven people, mostly pastors, were arrested for violating quarantine regulations Nov. 4 when police visited a Mennonite church in Blue Creek. Amandala reported police said almost 300 people were at the church. COVID-19 regulations limit the number of attendees at a worship service to 10 people.

“The calling of God is higher than the calling of this government,” said Blue Creek Village chair Abram Rempel.

The anticipated move comes as a conservation advocacy group claims other Mennonite groups already living in Peru are deforesting thousands of acres illegally.

Monitoring of the Andean Amazon Project claimed on Oct. 26 that three colonies started by Mennonites in the Peruvian Amazon rainforest have leveled 8,500 acres over the past four years. The colonies of Tierra Blanca 1, Tierra Blanca 2 and Masisea — all to the northwest of where the Shipyard families in Belize could settle — were started by Low German-speaking Mennonites from Belize and Bolivia in the past five years.

Satellite images between 2016 and 2020 show uninterrupted expanses of green transformed into a grid of brown rectangles at Tierra Blanca 1, where 5,370 acres of forest have disappeared.

Monitoring of the Andean Amazon Project reported the Regional Government of Loreto indicated in an Oct. 15 document that the Mennonite colonies do not have any approvals for large-scale forest clearing, and the government is coordinating with the environmental prosecutor’s office to investigate the Tierra Blanca cases. Such an investigation was already underway with the Masisea colony, and a sanctioning procedure has been initiated for “unauthorized land use change” (deforestation).