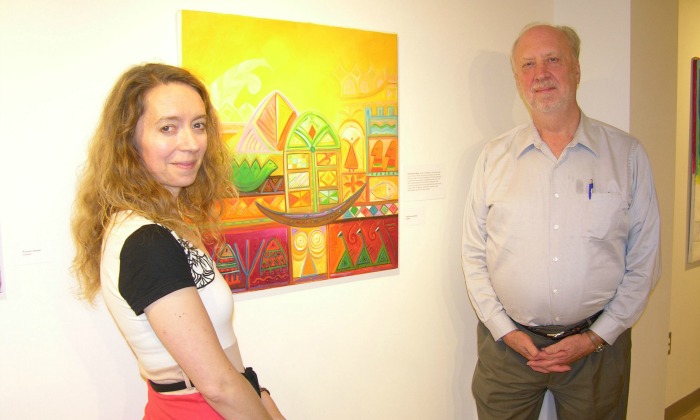 Photo: Rachel Epp Buller, left, professor of visual art and design at Bethel College, and Mel Lehman, director of Common Humanity, based in New York City, stand with the painting that Bethel purchased for its collection from the Building Bridges exhibit. The painting, “Untitled,” is by Nidaa Kareem Risan, an Iraqi artist now living in Canada. Photo by Melanie Zuercher.

A silent auction of artwork shown through the month of September in Bethel College’s Regier Art Gallery raised more than $3,000 for the artists – but its value went beyond money.

The New York City-based organization, Common Humanity, was responsible for bringing to the United States the 81 paintings (29 were hung at Bethel, North Newton, Kansas) by professional Iraqi artists and Palestinian art students – all of whom have been forced to flee their homes for Europe and North America over the past decade.

Wichita-based People of Faith for Peace and a coalition of Muslim, Christian, interfaith and college/university partners organized Building Bridges, an art exhibit and sale that took place in several Wichita galleries in addition to Bethel’s.

Jan Swartzendruber of Newton, part of People of Faith for Peace, was a driving force behind Building Bridges in south-central Kansas.

She learned about Common Humanity through her friend Susan Miller, a friend of Common Humanity director, Mel Lehman. A love of art and a desire to take part in active peacebuilding between Christians and Muslims motivated her to help organize Building Bridges, she says.

“The network formed by our volunteers has achieved our goal of forming friendships between Wichita-area Muslims and non-Muslims,” she adds.

At the closing for Building Bridges at Bethel Sept. 23, Lehman thanked Swartzendruber and others who had made the exhibit possible.

The gross amount (80 percent of total sales) from the Bethel sale was $3,200. Rachel Epp Buller, Regier Art Gallery director and Bethel associate professor of visual art and design, noted that this came from the sale of nine paintings in addition to art cards from Common Humanity and some art reproductions donated by Shafiq Hasan of Newton.

“The money does matter,” Lehman says. “These are people who are now in entry-level jobs – they are among the working poor. But more important is the validation that they have something beautiful [to contribute] that people can connect with. Who they are matters, and that they can keep making these beautiful things.”

The beauty of the art along with what it represents gave Lehman the idea to start trying to sell the work, he says. He was in south-central Kansas for two weeks, with speaking engagements at Bethel College, Hesston College and elsewhere.

Lehman first saw art like the paintings in Building Bridges on a visit to Damascus in 2008.

A decade earlier, in 1998, he had ended a 20-year career with the National Council of Churches to pursue his passion for building friendship, understanding and respect between the United States and the Arab and Muslim world.

Lehman had been deeply affected, he says, by the results of the UN’s economic sanctions against Iraq that began in 1990.

“The overarching thing that really changed my life was seeing [the suffering of] the children,” he says. “It was like seeing a house on fire with children trapped inside. You have to do something. I could at least put two sentences together into a coherent paragraph.”

Lehman began writing articles and, eventually, a blog. He facilitated some medical exchanges between doctors in the United States, and Iraq and Syria. In 2009, he founded Common Humanity and began concentrating more on cultural exchanges.

And he is trying to expand the art exhibits with accompanying silent auctions to more venues.

The art reinforces several of the points he makes in public presentations like those he did at Bethel and Hesston during his recent time in Kansas.

Among those points: that (according to “Lehman calculation”) “99.99 percent of Arabs and Muslims are not terrorists, and we should be starting a wisdom dialogue with those 99.99 percent, who want peace as much as most of us do. One of the [Building Bridges] artists said, ‘I’m an artist, I’m not a fighter.’”

Another is “to recognize the greatness of Middle East heritage and culture. Iraq is the land of prophets. Baghdad is ‘the House of Wisdom.’”

The American perspective of the Middle East and its people, reinforced by popular media, is far too narrow, he says.

“The pictures we see are of minorities, in the most extreme situations. What about all the good and positive things that are happening? I traveled [multiple times] in the Middle East mostly by myself and the only time I was in danger was from Americans [bombing Baghdad in 2003]. Neither Christianity nor Islam teaches violence, and in fact to do violence in Islam means you are not truly Muslim.”

He hopes the exhibits convey “a fresh look at the Arab and Muslim world,” one the Western world seldom sees, one that will build bridges between those worlds.