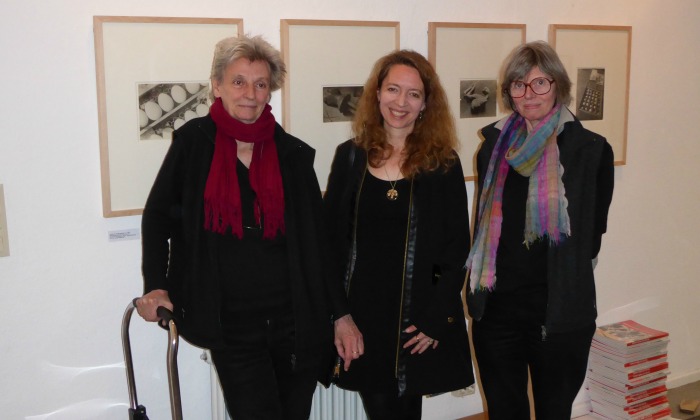 For the past five years, Rachel Epp Buller, associate professor of visual art and design at Bethel College, North Newton, Kansas, has been working patiently to bring a German artist out of the shadows.

That work came to fruition with an exhibition opening April 13 at Das Verborgene Museum in Berlin and publication of the exhibition catalog as a book, Alice Lex-Nerlinger: Fotomonteurin und Malerin (Photomontage Artist and Painter), celebrated at Bethel on April 29.

Epp Buller first came across the work of Alice Lex (Lex was married to fellow artist Oskar Nerlinger, so is sometimes referred to as Lex-Nerlinger) when she was working on her doctorate in art history at the University of Kansas in the early 2000s. She wrote her dissertation on Lex and two other women artists in Weimar (post-World War I) Germany.

In 2011, Epp Buller received a Fulbright Fellowship that enabled her to devote five months to learning more about Lex and finding her work. She spent the time in Berlin, working with staff and archives at Akademie der Künste (Academy of Arts).

She went back to Berlin in 2013 for several weeks with the help of a Gerda Henkel Stiftung Research Fellowship.

Returning this April for the opening of the first-ever Alice Lex retrospective, Epp Buller says that on the plane, she was looking back at journal entries about her work on Lex.

“It was five years to the week that [the museum staff and I] had first sat down to talk about this.”

She continues, “When I started the project, it was unclear what the outcome would be – an article, a book, an exhibition? By the end of 2011, I’d put together an exhibition wish list.

“Lex had a lot of exhibitions of her work in the ’20s and ’30s, but was then put under a work ban [in the Nazi era], so she wasn’t allowed any public exhibitions until 1945. By then, she had moved to East Berlin. Her last solo exhibition, which was drawings and prints, was in 1958 at a bookstore.”

Almost all of Lex’s work is in German museums. There are fewer than a dozen pieces in the United States, Epp Buller says.

“They all got here through one dealer, Julian Levy. In 1931, he visited her studio and bought directly from her. He showed the pieces in an exhibition of modern European photography in New York. He either sold, or his estate distributed, the works to the Art Institute in Chicago and the Philadelphia Art Museum [among others]. We got permission to reproduce them in the book.”

Lex worked in photomontage – then a relatively new medium – before World War II, and drawing and printmaking after.

“I was trying to show the breadth of her career,” Epp Buller says. “Her style changed dramatically from decade to decade, but with continuity throughout, of ‘art for the worker.’ The theme of labor recurs, often featuring female laborers.

“That [emphasis] came when she joined the Communist Party in 1928. It gave her a direction that lasted throughout her career. It gave her a purpose for her art – it was not just a private production, not about herself, but was to be of a greater benefit to society.”

Epp Buller first became connected to Das Verborgene Museum during her Fulbright semester in Berlin. The museum has a mission to host exhibitions by, and support research on, women artists who have been lost to history for various reasons. These are not only German but have included Dutch, Czech, Austrian and other artists.

“I met with a gallerist who owned a couple of Lex pieces. He knew about the work Das Verborgene did and he had given them my contact information. He knew they were interested in [Lex] – she was on a list of women they’d like to consider for exhibition and/or research.”

The April 13 opening of the exhibition was to a full house of probably about 200 people, Epp Buller says.

“One of the directors gave a short introduction, and there was brief presentation from the woman I had worked with pretty closely at the Academie der Künste archives, and my Fulbright host, in 2011, Rosa von der Schulenburg. There has been good collaboration between the academy and the museum.

“I gave a 10-minute introductory overview of Lex’s career, her political interests, why and how the exhibition came together. It was in German – I’m very glad that’s done!”

Epp Buller’s husband, Tim Buller, their three children, her mother and her parents-in-law all came along for the opening.

“They have been very supportive. They understood it was a big deal, the culmination of a lot of years of work. It was also fun to have friends from a variety of places” – including Bethel Professor of History Mark Jantzen and his family, spending several weeks in Berlin for Jantzen’s current sabbatical.

Epp Buller noted that one of the most meaningful parts of the opening was the presence of some of Lex’s family members.

“It’s not a large family,” Epp Buller says. “They had only one son. He died in 2004, but his widow is still living, I had met with her five years ago – she was in her mid-80s. Her daughter was at the opening, and her grandson, and other more distant relatives, basically the remaining family.

“They were so pleased with exhibition, the book, the attention [Lex] is getting. It felt very gratifying. It’s not just a research project; it really means something to some people.”

For the catalog/book, Epp Buller wrote most of the text (der Schulenberg also contributed), in English, which was then translated into German.

“Almost everything about Lex has been written in German,” Epp Buller notes. “It’s important, to give her wider exposure, to have some writing in English.”

With the exhibition and the book publication, Epp Buller says she feels her work on Alice Lex has reached its conclusion.

“I don’t anticipate doing anything further – but I hope it’s not the end, only laying the foundation for someone else in the future.”

She will continue to include Lex in her teaching, as well.

“Right now my Special Topics class is looking at art history 1900-45. I taught Lex in the class. When you’re trying to think of which artists are in the canon and which aren’t, this is a concrete way to insert an artist who has been left out. Students see the canon isn’t fixed – it can change.”

On her trip to Germany for the exhibition opening, Epp Buller also picked up a current example of how art reflects culture and society.

“There’s a museum, Kunsthaus Dahlem, on the edge of a forest outside Berlin,” Epp Buller says. “It was originally the site of the studio for Hitler’s favorite sculptor, Arno Breker, and has now been repurposed.

“The woman who runs it is on the Germany Fulbright e-mail list, to whom I sent e-mail invitations to the exhibition opening. She came to the opening, and invited us to come and visit the museum.

“I brought back a photo, and talked to my students about what happened in 1930s Germany in art. ‘Degenerate’ art was confiscated, and exhibited as ‘terrible art.’ Exhibits of ‘great German art’ at the time included a lot of Breker’s sculptures. The museum that was his studio now exhibits that ‘terrible art.’

“It makes it more real to have a personal connection,” Epp Buller says. “It helps the teaching come alive.”