The Sunday before Advent, I was preaching in Bethlehem. While there, a Palestinian friend I’ve known for nearly 20 years and who shares my appreciation for Orthodox icons gave me the wonderful gifts of a Nativity icon and a Root of Jesse icon. These “gospels in color” now occupy a prominent place in my study. They have been especially meaningful to me during this season of Advent.

I also received two more “souvenirs” from Bethlehem — a spent teargas canister and a used rubber bullet retrieved from the street in front of the Bethlehem Bible College where some of my Palestinian Christian friends teach. Unfortunately, these sad souvenirs are quite plentiful. 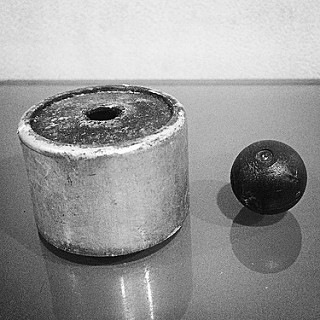 There seems to a prophetic metaphor in the beautiful icons and the ugly souvenirs. Both belong to Bethlehem. The City of David, the birthplace of Jesus, is marked by both iconic beauty and ugly reality. Jesus came into the world at the intersection of beauty and pain. Christ was born on the fault line of our most intractable conflict. O little town of Bethlehem… A city today where the beauty of Orthodox icons and olive wood Nativity sets collides head on with the brutality of teargas canisters and rubber bullets. Hope and horror in the House of Bread.

For contemporary pilgrims seeking to find a Hallmark Christmas card Bethlehem, the modern Palestinian city is a jarring disappointment. The bitter agonies of the Israeli-Palestinian conflict are evident the moment you pass through the controversial checkpoint with its looming concrete walls and ominous guard towers. 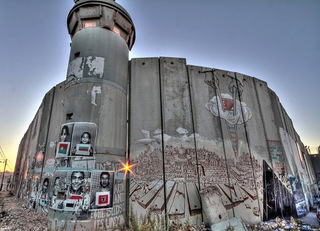 But the sentimental Christmas card Bethlehem never told the whole story anyway. When we read of Bethlehem in the Bible, we find an uncensored story that is all too current. The Bible tells unflinchingly of hope and horror, of beauty and brutality found in Bethlehem in the days of King Herod.

The magi (those Persian astrologers better known by the more benign moniker of “wise men”) had discerned in the stars the birth of a new King of the Jews. They came to Jerusalem to pay their respects…and unwittingly set in motion a chain of horrific events. When the paranoid King Herod put the pieces together, he sent death squads to the city of David to kill all the baby boys under 2. It was the Newtown massacre set in Bethlehem — the site of Rachel’s ancient tomb.

A voice was heard in Ramah,
Weeping and loud lamentation,
Rachel weeping for her children;
She refused to be comforted,
Because they were no more.
(Matthew 2:18)

The Holy Family escaped the slaughter only by becoming refugees who fled despotic violence in the Middle East to seek safety in a foreign country. Yes, this too is part of the Christmas story.

Jesus was born into a world where before he was two he was targeted for murder. Jesus is Emmanuel — God with us. And God is with us in the catastrophe of a world threatened by violence. God has not abandoned the world to its bloody fate. God saves humanity. But not by the worn-out way of “killing the bad guys.” That only recycles the violence. God saves humanity by joining humanity. God becomes one of us in order to heal us. The Incarnation is the matrix of salvation. God in Christ assumes humanity to heal humanity.

So we commemorate the divine mystery of the Incarnation with beauty and art. There is nothing more deserving of our best artistic efforts than the Incarnation. May we have more Nativity icons and manger scenes!

But Jesus wasn’t born into the beatific beauty of a Nativity icon. Jesus was born into a war-torn world where paranoid despots dispatch death squads and where teargas canisters and rubber bullets litter the streets. When we are faithful to the Christmas story as told in the Bible, it’s far from sentimental or naïve. Bethlehem is where beauty and brutality are found side by side. The Christmas carol is right:

But I don’t want to suggest that it’s a stalemate. I don’t want to give the impression that darkness and light, fear and hope are evenly matched. They are not. Darkness and fear belong to sin and the satan. Light and hope belong to God! I’ve put my hope in God and this is why I don’t despair — even if I’m stung by rubber bullets in Bethlehem and made to weep by tear gas in the City of David. I’m not a cynic. I hold on to hope. Why? Well, here’s a theological question for you (perhaps one of the greatest theological questions):

Does God get what God wants?

I dare to say, Yes! Why? Because God is God and sin is not!

Or to put it another way:

If we can believe this one verse, we can be a people of hope and peace in an age of fear and rage. We can write icons and not lob teargas. We can be beautiful and not fire rubber bullets. It’s not brute force or brutality that saves the world. It’s the beauty of the Word made flesh that saves the world.

I pray you have had a happy and hope-filled Advent.

Brian Zahnd is the founder and lead pastor of Word of Life Church, a non-denominational Christian congregation in Saint Joseph, Mo. He wrote about being influenced by Anabaptism in his book, A Farewell to Mars. He blogs at brianzahnd.com, where this post first appeared.