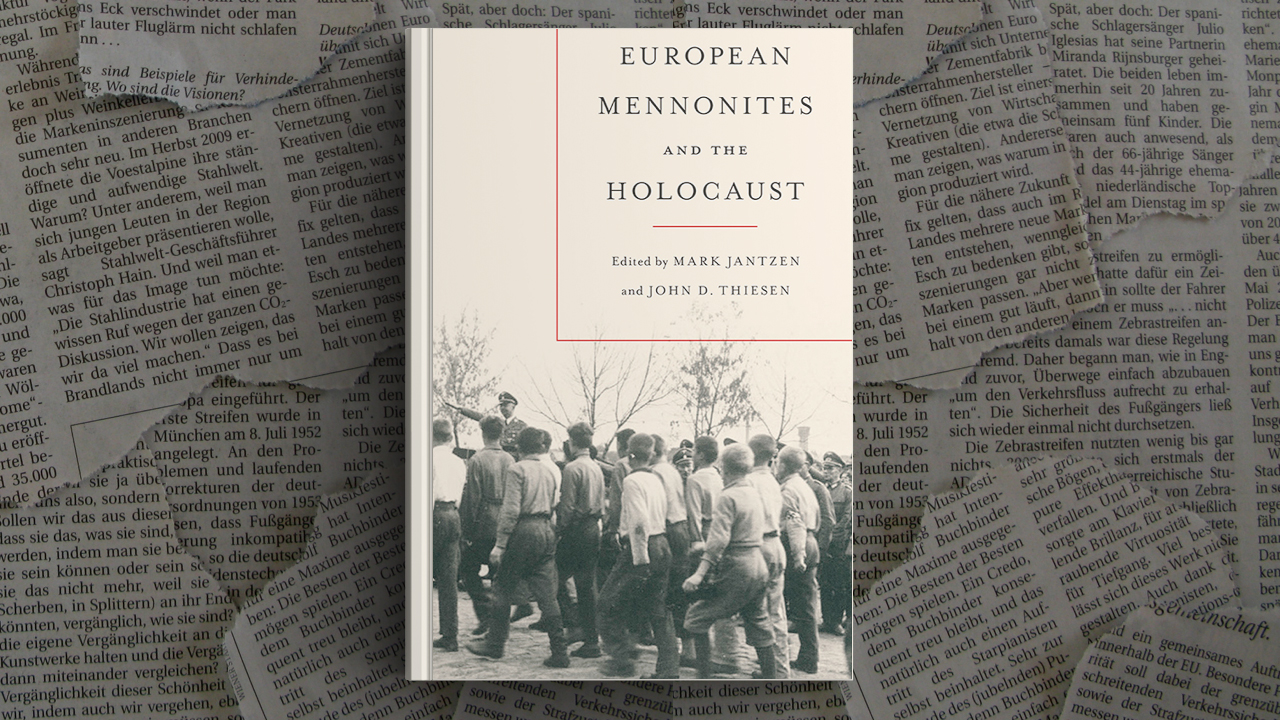 European Mennonites and the Holocaust grew out of a 2018 conference at Bethel College in Kansas. — University of Toronto Press

If committing genocide is a community activity, then uncovering and dealing with it is the responsibility of a community, too.

Dealing with how Mennonites were involved in the Holocaust against the Jews, she added, is something for North American Mennonites to undertake together as scholars, churches, families and friends.

The goal of the book, which grew out of a 2018 conference on the topic at Bethel College in North Newton, Kan., is to provide “a framework” for that conversation in “a community of inquiry,” she said.

At the online launch, which was attended by over 250 people, contributors Mark Jantzen of Bethel College, Aileen Friesen of the University of Winnipeg, moderator Marlene Epp of Conrad Grebel University College in Waterloo, Ont., and Bergen shared how, during the Second World War, Mennonites in the Netherlands, Germany, occupied Poland and Ukraine were witnesses to, and participated in, the destruction of European Jews.

In her opening remarks, Epp said this isn’t the first book on the topic but it “represents a new era of inquiry” from new scholars who have access to new sources and who are “bringing new ways” of looking at the issue.

In his presentation, Jantzen noted Europe’s 185,000 Mennonites during the Second World War were “neighbors to Jews, eyewitnesses to deportations and in some cases to mass murder.”

They were also beneficiaries, enablers and perpetrators of the Holocaust. Less frequently, some were also rescuers.

The public memory of that experience, he said, has typically been to see Mennonites as victims and “moral heroes.” That story, he said, is “terribly incomplete.”

Since dealing with this is hard, going forward Mennonites will need to “tread carefully and thoughtfully with empathy and persistence,” he said. “If this volume contributes to this process, the editors would be well pleased.”

For Friesen, the book is a way to address an issue has been mostly avoided or only spoken of indirectly in the past.

The long silence “remained unchallenged as long as history of Holocaust in Ukraine was overshadowed by cold war tensions,” she said.

But when Communism collapsed, archives in the former Soviet Union were opened, allowing access to new sources and permitting a new interpretation to emerge.

This includes interrogations conducted after the War, along with other material that corroborates it.

“Scholarship now unequivocally demonstrates Mennonite involvement in the Holocaust in Ukraine,” she stated.

During her presentation, Bergen credited American historian Gerhard Rempel with being among the first to bring attention to this issue.

“He was the first to implicate Mennonite killers,” she said, noting the first chapter of the book is from his unfinished manuscript.

For her, Rempel’s work was the “first time I encountered incontrovertibly Mennonites as killers of Jews during the Holocaust.”

One thing the book doesn’t resolve is the question of Mennonite identity.

“There is no definitive answer to who was Mennonite and who was not,” said Jantzen about that period. It’s not clear what role having a Mennonite background played in shaping the actions of individuals during the Holocaust.

“Most young Mennonites in the Soviet Union would not have ever experienced a functioning church,” he said. They would have been relatively ignorant of Mennonite theology.

In Germany, however, “many Mennonites used Mennonite theology to embrace National Socialism,” he said.

Friesen’s definition “is anyone who identified as Mennonite, or who benefited from having a Mennonite identity,” she said.

Bergen thinks the same standard of who was a Mennonite should be applied to perpetrators as well as to heroes. “Why disqualify a killer as not a real Mennonite but not be so strict with a rescuer?” she asked.

The presenters also agreed that ongoing discussion about the issue needs to include the Jewish community.

The story Mennonites told themselves about that time has served “to erase Jews,” said Bergen, adding it’s “important to bring forward Jews as people in this history.”

If the perpetrators “are no longer faceless, the victims also should not be,” said Friesen. “The incorporation of Jewish voices is essential as we move forward and study this history.”

The launch concluded with comments from Dan Stone, who is retired from the University of Winnipeg and a member of the Jewish community in that city.

He realized this is a sensitive issue for many Mennonites, and that after the war many tried to forget it.

The book, he said, is “a move in the right direction,” adding that Mennonites “can’t move on until everything is out in the open.”