The official periodical of the Canadian Conference of Mennonite Brethren Churches will be shuttered at the end of the year. 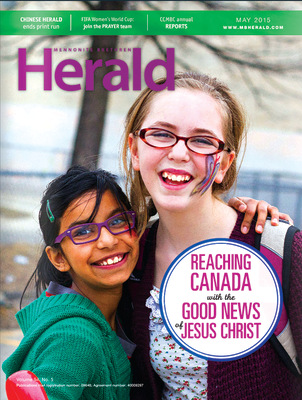 Conference leadership announced May 11 that Mennonite Breth­ren Herald will be replaced by a new, not-yet-named print publication focused on CCMBC’s goal to “multiply Christ-centered churches to see Canada transformed by the good news of Jesus Christ.”

CCMBC executive staff made the decision. Executive director Willy Reimer declined to comment for this story, saying he preferred to speak through CCMBC channels first.

“Although this change brings a certain amount of sorrow and grief with it, we believe God is calling us to start something new in order to move forward in mission,” Herald editor Laura Kal­mar said.

Reimer said in a news release that staff “are discerning how to facilitate other types of conversations around things such as theology, cultural issues and family news.”

Every member of a Canadian MB congregation can receive the Herald, paid for out of the CCMBC budget. A copy is sent to each address a congregation provides. Print circulation is 14,500.

Lower donations and other financial constraints have pushed the monthly publication to cut costs by moving to a bimonthly schedule immediately, leaving three issues remaining this year.

CCMBC also anticipates loss of a federal subsidy that supports print media. Because so much media is produced in the U.S., the Department of Canadian Heritage provides subsidies to support Canadian content.

“Changes to government requirements for magazine funding have made it likely the Herald would soon be ineligible to receive the grant money that supported print publishing in the past,” the release stated.

Kalmar said the changes prompted the denomination to explore new ways to give voice to CCMBC’s story and mission.

“This transition is an opportunity to celebrate the Herald’s 54 years of ministry and to say goodbye to an old friend who showed up regularly on people’s doorsteps, connecting our diverse MB constituency,” she said. “The MB Herald was birthed in mission way back in 1962. The goal was reach out to English speakers and keep the younger generation connected to church.

“Over the years, we’ve sought to fulfill that mission and foster community through story, biblically based teaching, conversations and cultural engagement.”

The Herald experienced controversy soon after it began. Donovan Giesbrecht writes in a 2005 Global Anabaptist Mennonite Encyclopedia Online article that founding editor Rudy Wiebe lasted little more than a year before he was forced to resign in 1963 without official explanation.

Wiebe, who became an acclaimed novelist, brought a critical tone to editorials, and his 1962 book, Peace Shall Destroy Many, was considered controversial.

In his June 21, 1963, farewell, Wiebe stated, “There are in our brotherhood those who do not believe that frankness and openness is the way things should, or even can, be fruitfully discussed.”

Openness became more common under longtime editor Harold Jantz, who served from 1964 to 1984 and restored leadership’s confidence in the Herald.

“I think what is envisioned in place of the Herald would be something that would have a more focused direction, and the focus I’m assuming would be quite clearly intended to strengthen the evangelistic role or supportive role the paper would have to church planting and evangelism,” he said.

While he supports those goals, Jantz said such a direction misses a few things.

“The paper is shifting increasingly to a way of speaking from the top down and not from the bottom up, and we need that,” he said. “I think this means we need to be broader than one core emphasis. We may well be supportive to one core emphasis that the leadership wants, but we also need a variety of gifts.”

Canadian MBs are scattered across the country, and the Herald has been a vehicle of hearing each other and providing input to leadership.

“The Herald has been a key element in that,” Jantz said. “I don’t know of any way we’d be able to maintain this community with one another if we don’t nurture that form of communication. I think it’s almost inevitable that we will find ourselves drifting apart.”