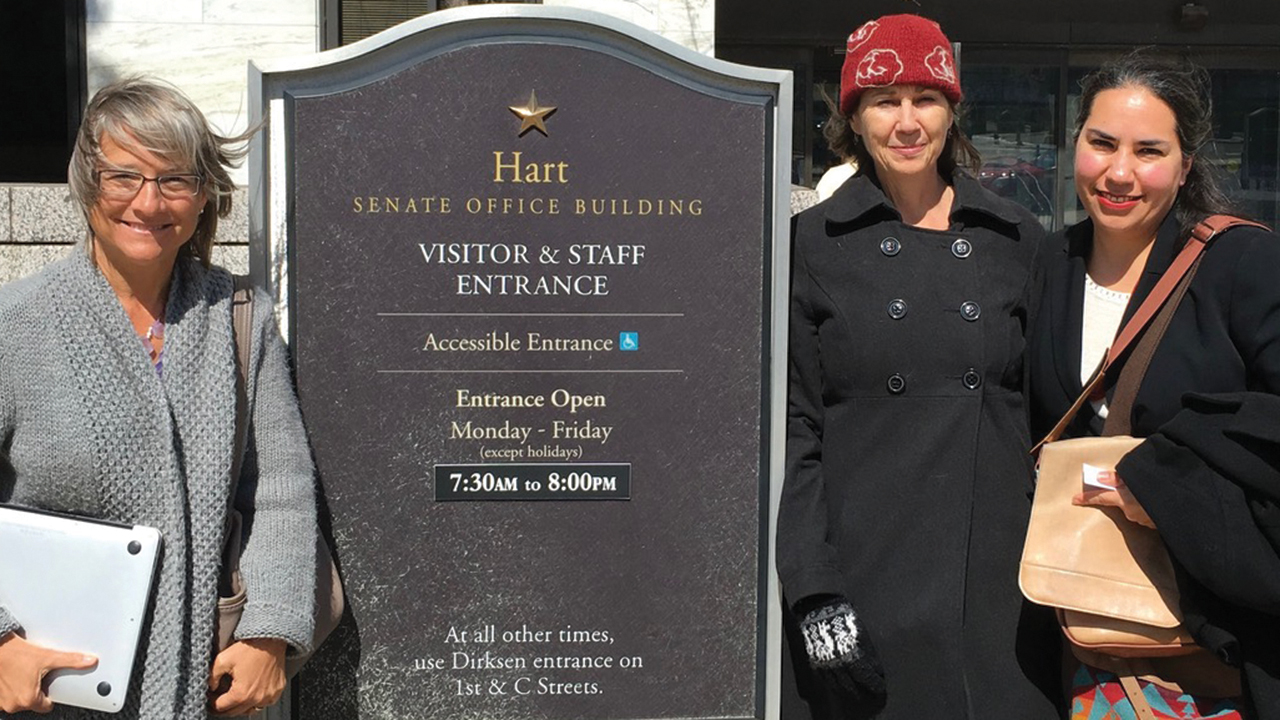 My congregation, First Mennonite Church of San Francisco, has been learning about colonization and its continuing impacts since I founded the Dismantling the Doctrine of Discovery Coalition in 2014 with Sarah Augustine and Anita Amstutz. We have put action behind that learning by becoming a member of the coalition’s Repair Network, advocating for the Indian Child Welfare Act and hosting members of the San Carlos Apache when they came to federal district court to defend their sacred site of Oak Flat from a copper mining corporation.

Our commitment went to the next level when we decided to issue a $100,000 challenge grant to the larger church to hire Augustine as a full-time Indigenous organizer for the coalition. We are not a large congregation — and, due to membership loss during the pandemic, are facing a possible budget shortfall next year. But we believe now is the time for the coalition and Augustine’s work to move forward.

In addition to learning about colonization, our congregation has been waking up to the connections between the Doctrine of Discovery and the roots of the climate/ecological crisis in our exploitation of Indigenous lands and peoples.

We in the wealthy Global North are living in a state of ecological overshoot: Our demand for natural resources exceeds the regenerative capacity of Earth’s ecosystem.

We must transition from being a creation-destroying civilization based in extraction and exploitation to a sustainable one. Ecological philosopher Joanna Macy calls this the Great Turning. This vision motivates Kinari Webb, who founded Health in Harmony, a nonprofit that reverses tropical deforestation by partnering with Indigenous communities.

After reading Augustine’s book, The Land Is Not Empty, Webb told me, “I want to support Sarah’s leadership, just as so many have supported mine. The world needs her leadership now.”

She put money behind that belief. Compelled by Augustine’s insistence that it is not moral to profit from investments in extractive industries like mining, which devastates Indigenous communities, Webb and her wife, Stephanie, donated a stock fund worth over $18,000 for hiring Augustine full-time. She challenged the rest of the congregation to do the same.

“This is a very scary process for us to give so much money,” she said. “We do worry about Rowan’s [their son’s] future, and yet we consider this a different kind of investment in the future he’ll inherit. . . . For us, this is also a form of reparations. I have a conviction of faith that when God calls, many positive things will come from it.”

We answered the challenge. In four months, First Mennonite Church raised $100,000 to create the matching grant challenge. It felt like a true outpouring of the Spirit. For years, I and the coalition have longed to hire Augustine full-time to do the work to which she has devoted her life. For decades, she has been a leading voice in calling the Christian church to dismantle structures that oppress Indigenous peoples and deprive them of their lands — structures the Christian church established centuries ago.

I believe these same structures have now brought us to a point of crisis. I believe this is the kairos time, the fullness of time, when we must all dedicate ourselves to the Great Turning.

And so, our congregation issues a challenge: Will you join us in empowering Augustine and the coalition to do this important work? We will match every dollar donated to Augustine’s salary campaign up to $100,000 through Indigenous Peoples Day, Oct. 10. To do so, go to dofdmenno.org/donate.

There are other ways to join our coalition’s work toward Earth healing and justice with and for Indigenous peoples. We invite your volunteer energy on our committees and your commitment as part of our Repair Network (dofdmenno.org/coalition-structure-and-committees). Thank you!