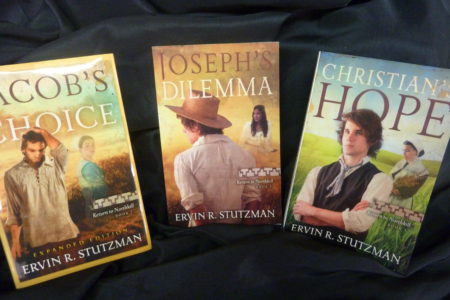 With Christian’s Hope, author Ervin Stutzman, also executive director of Mennonite Church USA, concludes his Return to Northkill trilogy. Published by Herald Press, this historical novel, set in the 18th century, is a based on a true story of warfare, nonviolence, and moral choice.

The first novel in the series, Jacob’s Choice, describes the historic French and Indian War massacre and aftermath in which an Amish father and two sons were kidnapped and their family killed. Joseph’s Dilemma looks at war and forgiveness through the eyes of a son adopted by his Native American captors. In Christian’s Hope, the second surviving son returns from captivity to find himself no longer at home in Amish culture and questioning his beliefs and identity.

Universal themes emerge in this story from centuries ago, said Stutzman in an interview. Christian Hochstetler faces interfaith questions about culture and the scope of God’s love.

He questions who he is after his unwilling return from his adopted Native American home after eight years away. Is he Amish? Is he Indian? What clothes should he wear? Who is his true family? Which faith does he claim?

The key theme of Christian’s Hope is the question of life’s purpose, Stutzman said. Christian is a young man of 20 who is considering marriage and faith and asking, “What is the purpose for my life? How do I make sense of what has happened to me?”

Stutzman based his trilogy on documented evidence about the Hochstetler family, adding details and dialogue to the known historical facts. In careful consultation with the available documents, Stutzman also considered the legacy of the story and contemporaneous history. “It could have happened this way, based on cultural assumptions of that time,” he said.

Jacob’s Choice, Joseph’s Dilemma, Christian’s Hope: the titles are significant, said Stutzman. “They get at decisions—the way people think and work, what life presents, and how we deal with it.”