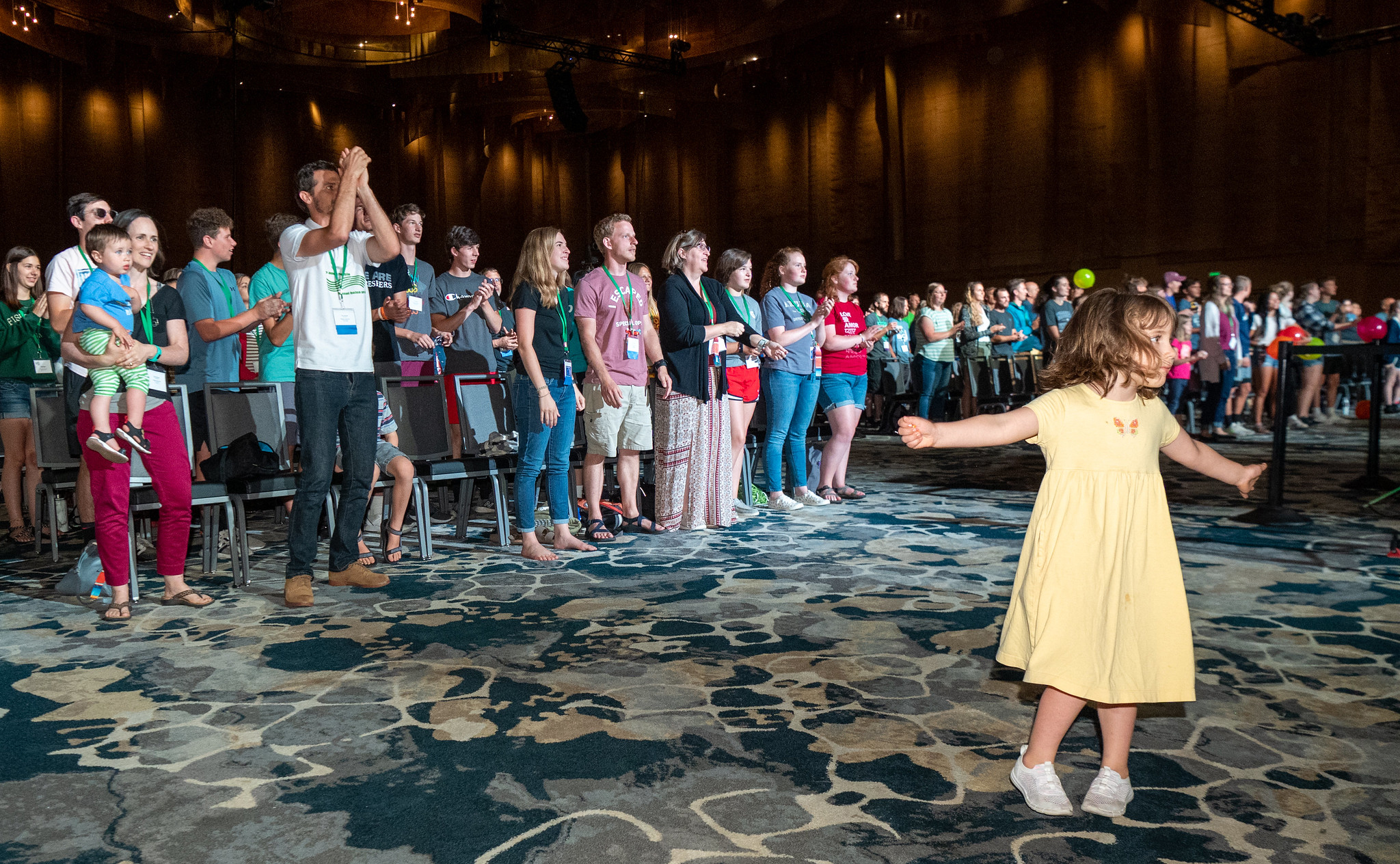 A girl dances to the music of the worship band in Duke Energy Convention Center. — Ken Krehbiel/MC USA

One of my favorite quotes from the Mennonite Church USA convention was when executive director Glen Guyton told the delegates his agenda was 99% Jesus and 1% food.

It was a colorful way of saying something he had emphasized a couple of hours earlier at the final worship service: “Jesus is enough.”

Guyton likes to wrap a serious message in a lighthearted package. His signature move is singing a classic rock song with new words. This year it was “Free Bird”/“Free Dove.”

“Jesus is enough” wasn’t the only succinct Cincinnati convention message.

Lesley Francisco McClendon and Caleb McClendon taught about peace that grows “from root to fruit.”

It was appropriate that a small convention produced wisdom that condensed well into short phrases. “Keep it simple” is good advice in a lot of contexts. Past conventions sometimes got a bit overwhelming — big crowds, dozens of choices at any given time, worship services possibly overstuffed.

MennoCon21 wasn’t that way at all. Streamlined worship — songs, a video or two, a message, more songs, “go in peace” — lifted spirits just as much as ever, thanks to a dynamic band and inspiring speakers.

Maybe this convention proved the value of Mennonite thrift, the wisdom of doing more with less.

But then we started singing, often in Spanish. And going to seminars, catching glimpses of faithful witness and talking about common concerns. And meeting friends in the hallways.

And singing some more.

Everyone I talked to said they were glad to be there.

These days it might not take much to get us excited about a communal experience. Pandemic-induced deprivation of fun and fellowship magnified the joy of gathering as a national body.

Emotion was contagious as we learned songs from the new Voices ­Together hymnal and as teen­agers jumped and waved in front of the stage.

It didn’t matter so much that we numbered in the hundreds rather than the thousands.

We were experiencing what sociologists call collective effervescence — the synchrony of emotion and purpose that within the body of Christ we attribute to the presence of the Holy Spirit.

MennoCon21 was worth it because we did the work of the church. But not in the usual way, with delegate sessions throughout the week. We did it by building relationships face to face.

Sometimes we talked about difficult issues. I have a personal example.

With the duty to express opinions in an editorial, I felt the need to critique Ana Alicia Hinojosa’s Thursday night message. She told a wonderful story of her father — Eduardo “Lalo” Hinojosa, pastor of New Life Christian Center, a Mennonite congregation in San Benito, Texas — who recovered from COVID-19 after hospital staff feared he would not survive.

She told her audience to expect their own miracle. She said she believed COVID had a purpose to reveal God’s healing power.

I, and others, felt Hinojosa had neglected to acknowledge the pain of those whose loved ones died of COVID. She seemed to suggest that prayers for healing will produce miracles if we only have enough faith.

I arranged to talk with her the next day. What about when God doesn’t do a miracle? I asked.

Hinojosa replied that she felt the Spirit had guided her to preach the way she did even though she knew some people would question it. She too has experienced losses in her family and church due to COVID.

“God healed Dad on Earth and heals others eternally,” she told me. “We don’t always get the answer we want, but God can give peace to all of us.”

She and I agreed it was important that we had talked. The convention had brought us together in a personal way. A potentially hard conversation wasn’t that difficult after all. She heard my critique and graciously accepted that I would share it publicly. I learned that her theology of suffering and healing was more nuanced than she had revealed on stage.

I’m sure I’m not the only one who remembers a meaningful conversation as a Cincinnati highlight. In those moments, we did the work of the church. We look forward to the next time, when more people can share them.