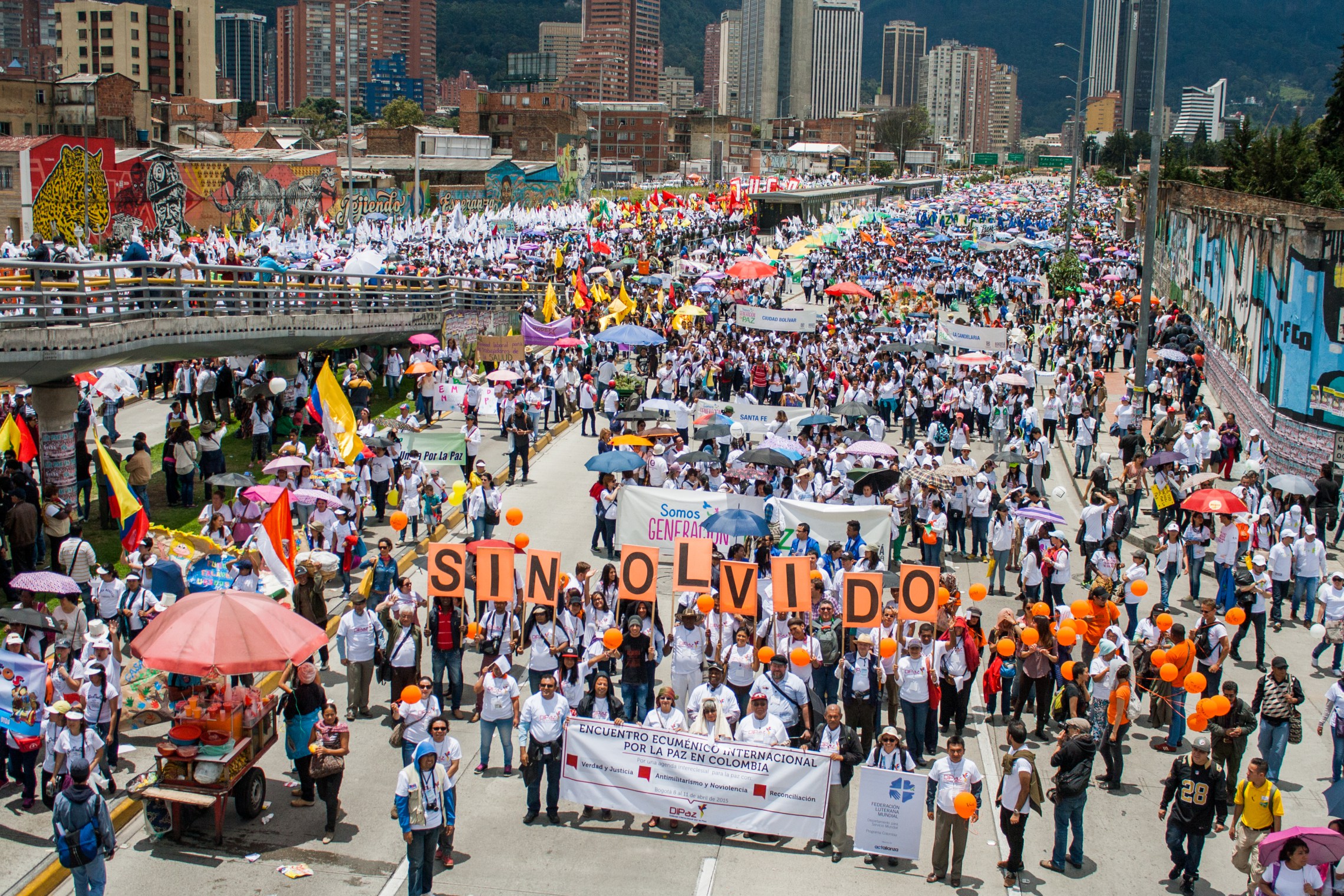 Wednesday, August 24, was an historic day in Colombia: the national government and FARC guerrilla group announced that they had reached an agreement after nearly four year of negotiations, effectively ending the longest-running armed conflict in the Western hemisphere. While several key events need to take place before the official signing and implementation of the peace accords, this news represents a significant step towards the next stage of building peace in Colombia.

Colombian Mennonite, Mennonite Brethren, and Brethren in Christ churches and affiliated organizations have been working for decades to build peace in different regions of the country. What does this step in the negotiations between the government and FARC mean, then, for these churches and faith-based organizations?

Dear brothers and sisters in the North and in the South…

We are certain that your hearts are as glad as ours to hear that after more than three years of negotiations we as a nation are nearing the signature of a new peace agreement between two historic enemies: the Colombian state and the FARC guerrillas (the Revolutionary Armed Forces of Colombia). We are conscious that it is a critical period and are very hopeful for our country: critical because we don’t want to commit the mistakes of yesterday, and hopeful because of the opportunity to begin again. Ending the war doesn’t mean ending the violence, but without a doubt this is an indispensable step for rebuilding a country with deep wounds; and why not hope that the promise of Isaiah may be fulfilled, that the wolf and the lamb will eat together at the table? In our communities there are many wolves and many lambs, and many times it is impossible to say that one has not been wolf and lamb at the same time.

We walk into this new stage with hope and with uncertainties, including the subject of disarmament. This doesn’t mean just laying down weapons, but healing the wounds caused by the war. Healing as a nation will not be easy, forgiveness is not a simple path, forgetting would be an unforgivable sin, walking the path of truth, not to find the guilty – because in war all citizens participated, including those of us who refused to think about it; we are guilty of indifference. The purpose of truth is to bring to light the sins committed in our nation, and we pray to God that repentance will come hand in hand with mercy, grace, and why not justice as well? Pray, brothers and sisters, because this has not been, nor will be, an easy path.

Carolina Perez, Colombian and co-facilitator of the Seed program:

Like a utopia become reality, like an interminable length of time, like waking up from a dream, in Colombia we celebrate the decision for a peace accord after a conflict that has accompanied us for more than sixty years. We recognize that it is not complete, that there are other groups that need to enter the conversation, that not all the social issues have been resolved which have brought us much violence. We recognize that we have fear and uncertainty but we also recognize that it is time to bet on life, time to de-normalize violence, time to heal and strengthen the hope that has sustained us for so long in this context of pain and violence.

Today we are many Colombians who bet on peace with social justice, equity and opportunities for a dignified life for future and present generations, and for this we celebrate!

Today an important and significant step has been taken for the Colombian people. Two groups of warriors, the national government and the FARC-EP guerrillas, have shaken hands and signed an accord in which they commit to putting an end to a war of nearly sixty years.

We, as a people, from the grassroots, full of happiness and hope, with our hand on the plow and our feet firmly on the ground, look ahead with expectation and tempered enthusiasm.

Upon looking ahead, we see the enormous challenges and obstacles on the path towards the horizon of justice, peace and reconciliation.

We don’t want to think only with our desires, nor let the enthusiasm and joy of this moment dull our understanding and keeps us from taking the opportune and pertinent steps that we need to in order to take advantage of this great opportunity.

The way is not clear. The plebiscite has not yet happened. The ruling classes, who have control of the establishment and the State, have not yet arrived at an agreement and argue among themselves, creating confusion. Many of their reactions are unpredictable and they are capable of resorting to inciting violence.

There are still many warriors on the path. Agreements have not been made with the ELN, EPL, organized armed groups, and drug traffickers. Administrative corruption is rampant, and the electoral businesses of clientelism have much power.

All this is aggravated by social injustice, inequity, accumulation of land into the hands of few, racism, and a great addiction to violence invite us to be cautious.

Popular wisdom says ‘he who sleeps on the floor never falls out of bed’. With our feet firmly on the ground and sleeping on the floor, we welcome these accords, and embody faith and hope as we continue to cultivate peace in our region as we have done for all these years.

Justapaz, an organization of the Mennonite Church of Colombia:

For Justapaz, the announcement of the final agreement between the Colombian government and the FARC-EP guerrilla group is the fruit of the work of Colombians who over the years have prayed for and asked that both sides cease their armed confrontation. The accord is an opportunity to begin to change the country’s history of violence, and this fills us with hope. Finally, the accord is seeing that the prophetic word of Isaiah 2:4 can be a reality in Colombia.

We believe that this is a big step forward for Colombians. One of the concerns we have is that these accords will only be on paper and will not actually lead to change in rural areas –  which have been most affected by the violence – due to the lack of knowledge about the accords on the part of both the victims and the victimizers. The topic of the plebiscite is also something that the society at large does not know about. We believe that a simple pedagogical process should be facilitated with businesses, churches, universities, and communities, so that the agreement can be lasting and respected. Colombia should be congratulated for this progress towards peace, which will be complete with Christ in our hearts.

Diana: But an important step.