Hannah Heinzekehr, The Mennonite, with reporting by Jake Short 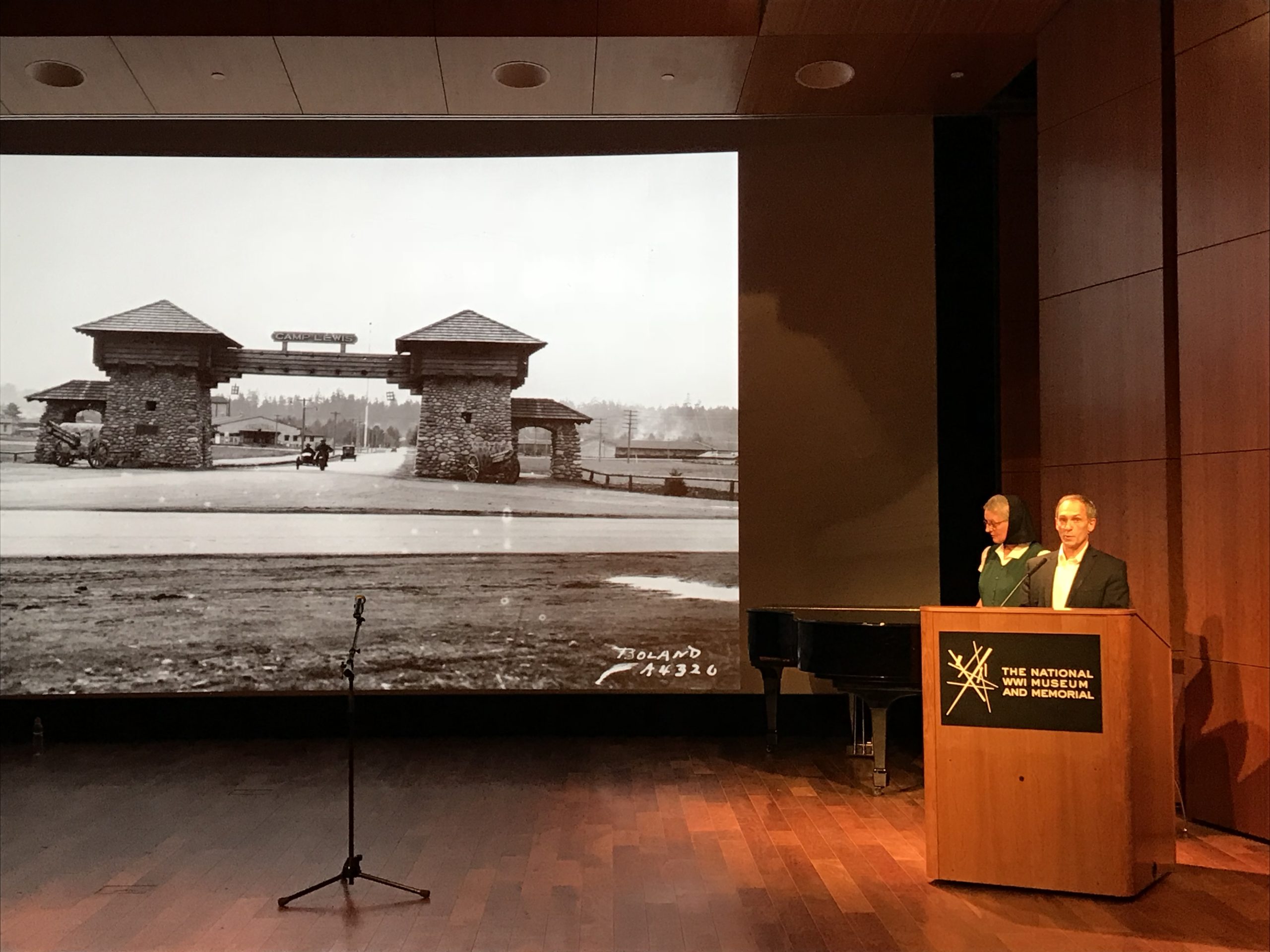 In the United States and among peace churches, we haven’t been talking as much as we used to about conscientious objection to war and we should be. This was the strong and clear message coming out of a three-day conference exploring the stories of conscientious objectors to World War I and the lessons of these stories for today.

More than 250 participants gathered for “Remembering Muted Voices: Conscience, Dissent, Resistance and Civil Liberties in World War I,” held Oct. 19-22 at the National World War I Museum and Memorial in Kansas City, Missouri. The number of registrants exceed organizers’ expectations and filled the museum’s auditorium to capacity.

“We’ve been learning about the past because it has relevance for the future,” said conference organizer

Andrew Bolton, Community of Christ Church. “This is not a historian’s conference; this is an activist conference. It is so important to be encouraged by the stories of the past.”

Through plenary lectures, a new traveling exhibit, workshops, paper presentations, concerts and a memorial service, the conference painted a broad picture of conscientious objection, exploring the stories of Anabaptists and other historic peace church objectors, Protestant and Catholic objectors, and secular objectors motivated by humanitarian, environmental and justice concerns.

In his remarks to open the conference, Matthew Naylor, the president and CEO of the Museum, said, “At a time when some would argue the world looks more like the world of 1913 than it has in the past 104 years, this work of remembering, of learning, of peacemaking, is more important than ever. We at the National WWI museum are dedicated to educating the public not only about war but also its causes and consequences.”

In a breakout session reporting on their work, three representatives from the Center on Conscience & War in Washington, D.C., noted that their work of supporting conscientious objectors now focuses primarily on support for populations beyond peace church participants, including secular humanists, evangelicals, Protestants, Catholics and American Muslims who join the military and then develop anti-war convictions.

“The people joining the military today without a draft are often secular or from just war traditions.”

Jake Short, a member of Hyattsville (Maryland) Mennonite Church and administrative and outreach coordinator for the center, told his own story of turning 18 and feeling convicted about whether to register or not. Ultimately, he said, he made a choice to “compromise my conscience” because he wanted funding for college education.

“It felt like Conscientious Objector status had fallen largely to the wayside of Mennonite Church USA, and I wondered how many others out there had no idea about their options,” said Short. “Indeed, how often is the draft, conscription, military service and conscientious objection talked about in traditional communities committed to peace in the U.S., as this country no longer has a draft? Who is willing to talk with young men who are turning 18 about what it really means to register with the Selective Service System?”

United Kingdom, offered a paper exploring German citizen opposition to World War I. Due to the death of her father, Sharp was unable to attend the conference in person, and her paper was read by Lora Vogt, the museum’s curator of education.

“It’s important to remember that there are other ways of resisting, of refusing cooperation, that don’t require such high moral standards and are maybe more accessible,” wrote Sharp, referencing recent protests by Colin Kaepernick in the National Football League and the 2017 Women’s March on Washington. “Small acts of resistance, solidarity and protest can be highly effective. The men and women who made a stand in Germany were often at the top of the list when the Nazis came to power in 1933. For many of them, their memories were obliterated or publicly denounced so that they would stand as a warning not to resist. It is important for us to remember these muted voices and reflect on their resonance and relevance and for our own lives and very present circumstances.”

joined choirs from the University of Missouri Kansas City for a performance of  Dona Nobis Pacem, a “plea for peace” composed by Ralph Vaughan Williams in 1936.

Each of the representatives shared stories of the ways their organization’s work has adapted and changed over time and also maintained a consistent commitment to antiwar advocacy and peacebuilding.

“Mennonites see it [success] as establishing communities of love, sharing and justice,” said Juhnke. “Mennonites have often been tolerated in highly militarized societies (like the United States), even during WWI, but this hasn’t always been an advantage.”

“All the groups represented in this session have been working to make big change in small chunks and in collaboration with other groups,” said Dawson.

He suggested that challenges facing peace advocates include the links between other movements and war (he noted that women’s movements and movements for people of color have often gained support when they supported the military during wars), that antiwar movements often must “lure activists away from other justice movements,” and each war involves building a new movement.

Kazin noted a quote by author and activist William James that “history is a bath of blood.”

“Only when we recognize that will we be able to change it,” said Kazin. “To begin to change scholarship and understandings of history, tell more people about the movement to halt the Great War. [Antiwar advocates] had no illusion that they could advance their goal by staying aloof from the world. They had a tolerant nonaggressive relationship with other nations working for peace.”

On Oct. 21, Dora Maendal, a teacher at the Fairholme Hutterite Colony in Manitoba, and Duane Stoltzfus, professor of communication at Goshen College, told the story of “the Alcatraz brothers,” four Hutterite men from Freeman, South Dakota, who were detained and imprisoned because of their refusal to participate in the military after being drafted during WWI. Two of the brothers, Michael and Joseph Hofer, died while imprisoned. Maendal and Stoltzfus’ storytelling was interspersed with choral music provided by the Hutterian Young Peoples Choir.

“To Hutterites, the Hofer brothers were martyrs who died at the hands of the state while remaining true

to their beliefs,” said Stoltzfus. “The Freeman Courier printed the briefest of reports about the deaths of Joseph and Michael, not even including their names.”

The presentation was met with a standing ovation.

On Oct. 22, the conference concluded with a memorial service open to the public and a tour of Fort Leavenworth, where the Hofer brothers and Jacob Wipf were imprisoned.

Throughout the conference, attendees had a chance to peruse a brand new exhibit, Voices of Conscience, which explores conscientious objectors during World War I. The exhibit was created by Chuck Regier, museum curator of exhibits at the Kauffman Museum in North Newton, Kansas. The exhibit will travel across the country and be housed at Mennonite and Brethren organizational locations through November 2018. For more information about the exhibit, visit www.VoicesofConscienceExhibit.org.