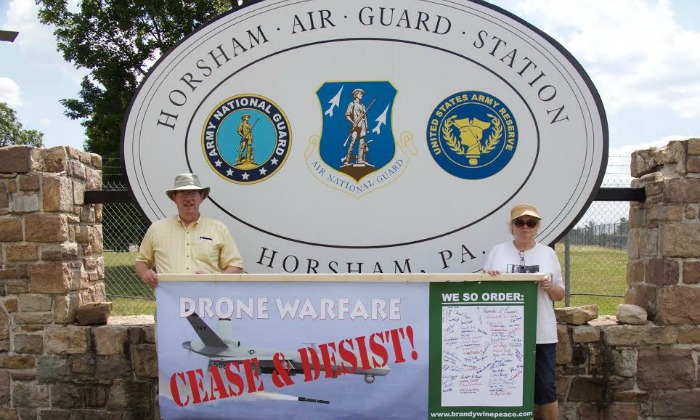 Photo: Harold Penner of $10.40 for Peace and Melissa Elliot from the Brandywine Peace Community hold a Cease and Desist order signed by many of the conference participants in front of the Horsham Air Guard Station during a public witness by attendees at the Faithful Witness in a Time of Endless War conference. Photo Credit: John Lien, Coalition for Peace Action.

About 100 participants gathered at Christopher Dock Mennonite High School, Lansdale, Pennsylvania, June 24-25, to focus on the theme: Faithful Witness in a Time of Endless War: Drone Warfare and God’s Call to Peacemaking. The conference grew out of a resolution of the same name passed by delegates at the 2015 Mennonite Church USA convention in Kansas City. The conference featured presentations by religious leaders, activists, academics, a former chaplain and a former CIA operative, culminating in a public witness at the nearby Horsham (Pennsylvania) Air Guard Station. The base is the site of an armed drone command center which recently became operational.

Several local Mennonite congregations supported the conference through planning and financial contributions. Lynelle Bush, conference attender from Salford Mennonite Church in Harleysville, Pennsylvania, said “Mennonites in our area need to have their eyes opened to the reality and true impact of drone warfare, to repent of silence and apathy, and to seek guidance of the Holy Spirit as to our role in speaking truth to power.”

Author and activist Medea Benjamin who has traveled to Pakistan, Afghanistan and Gaza to meet with family members of drone attack victims noted that drones kill many innocent people and turn terrorists into martyrs. She urged faith communities to speak to the issue of drone warfare or lose their moral voice.

Former CIA analyst Christopher Aaron began his presentation with a moment of silence to remember the people he had participated in killing. Aaron joined the CIA after the 9/11 attacks on the World Trade Center towers, believing that this was his opportunity to “do something that mattered.” He noted that despite “successes” in killing high profile terrorist targets, security in many Middle East towns and villages was actually worsening. He resigned from the drone program after realizing that he was part of a series of continuous conflicts with no discernable goal, similar to the situation described in George Orwell’s book, 1984.

Bob Smith, long-time peace activist in eastern Pennsylvania, spoke of the importance of infusing activism with love and outlined the history of a monthly public witness at the Horsham Air Base.

Former Mennonite Central Committee peace educator Titus Peachey offered a reflection on Luke 9, comparing the disciples’ impulse to call down fire from heaven on a Samaritan village with armed drone warfare. He noted that Jesus rejected this call from the disciples and changed the entire paradigm by telling the story of the Good Samaritan several days later.

In a spoken word performance, the artistry of Blew Kind linked drone warfare, white supremacy and colonization while accompanied by musical instrumentation mimicking the sound of the constant buzzing of a drone.

Former Army Chaplain Chris Antal talked about resigning his commission on April 12. While noting that he is not a pacifist, he believed his chaplaincy role had become that of priest and morale builder for the empire. He was deeply disturbed by the lack of transparency or accountability in the drone program, noting that it does not meet the criteria of “protecting the innocent.”

Kelly Denton Borhaug, Chair of the Religion Department at Moravian College, St. Bethlehem, Pennsylvania, began by saying that we live in a culture of death. She provided a probing analysis of the language of sacrifice present in war culture and Christian theology. Borhaug insisted that peace is not a commodity to be purchased with blood, but rather a way to live.

Several presenters discussed strategies for building a culture of peace. Muhammed Malik, co-founder of Muslims for Ferguson, discussed his practice of sitting with Christian communities to listen, build trust, and begin dialogue. Author and founder of The Simple Way, Shane Claiborne, described initiatives that create holy mischief, including street theater or highly symbolic acts such as beating guns into garden tools.

Preston Bush of the local conference planning committee said, “Just because Mennonite delegates affirmed the Faithful Witness resolution last summer doesn’t mean we have completed our prophetic responsibility in our own generation. What was the meaning of the resolution if it was not a mandate to ongoing action? The monthly witness at the Horsham Drone Command Center is our opportunity to really be who we say we are.”

The conference was initiated by $10.40 for Peace , Lancaster, Pennsylvania, as a way to act on the Mennonite Church USA resolution. Additional funding and planning support came from the Interfaith Network on Drone Warfare, and from the Brandywine Peace Community, which coordinates the monthly vigils at Horsham.

Titus Peachey recently retired as the Director of Peace Education for Mennonite Central Committee U.S. He continues as a counselor on the GI Rights Hotline and serves on the Advisory Board for Legacies of War. He lives in Lancaster, Pennsylvania, with his wife, Linda Gehman Peachey. They attend East Chestnut St. Mennonite Church.