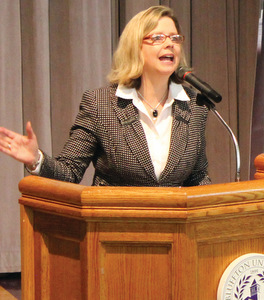 BLUFFTON, Ohio — The three Rs have been viewed as foundations of education since the days of the one-room schoolhouse.

But the president of Canada’s Conrad Grebel University College in Waterloo, Ont., proposed Jan. 13 that the success of small, Christian liberal arts colleges boils down to three Cs.

Speaking at Bluffton University, Susan Schultz Huxman said Christian liberal arts education matters because “its counterculture mandate serves a noble purpose; connections are the heart and soul of its academic mission; and the community [that it builds] transforms lives by grooming responsible citizens to engage our very beautiful but broken world.”

Asserting that Mennonite liberal arts institutions are thriving, she attributed their success in part to a “dare-to-be-different” attitude among their founders.

“In planting the seeds of these first Mennonite colleges in North America,” she said, “these brave men and women were going against the grain, taking large risks, purchasing barren property on a wing and a prayer . . . and believing fervently that Mennonite colleges would rise from these humble roots and thrive amid all of the state and private colleges and big research universities.”

She said the Anabaptist faith tradition demanded, and still demands, such a nonconformist attitude.

Both the Christian and Anabaptist stories are countercultural. In the former case, she pointed to Jesus’ birth “in a barn to an unwed teenager; to his life and ministry where he consorted with outcasts, misfits, sinners and unbelievers, even choosing his disciples not from the learned set but from the blue-collar set; to his death on a cross with common criminals; to his resurrection, first presenting his risen self to women, of all things, scandalous for his day.”

Huxman cited connections between faculty members and students at Christian liberal arts colleges — sharing meals and co-participation in sports, music groups and service trips — that are uncommon on other, larger campuses. That’s countercultural, she said, but it’s also indicative of the distinctive kind of education available at such colleges, including Mennonite institutions.

A lot of stories and research “document that the broadly educated person — the person who can connect the dots across content and context — is what employers want and what our civic life needs,” she said.

She told of a Conrad Grebel alumnus whose campus experience in peace and conflict studies, music, student council and service learning helped him land a job with Apple right after graduation.

There are risks to stressing connections when talking to prospective students, in part because pressures to specialize are everywhere.

“And the drumbeat of negativity toward broad-based liberal arts education as hopelessly outdated is alive and well,” she said.

Recent studies commissioned by the Association of American Colleges and Universities support liberal arts education. In one of them, she said, three-quarters of polled employers agreed with the statement that “being well-rounded with a range of abilities is more important than having industry expertise, because job-specific skills can be learned on the job.”

She also asked what Christian liberal arts colleges can do about what some scholars are calling the post-civic generation — “the generation that’s grown up without much in the way of a larger public social life.” The answer is community.

When students leave a university after one year, Huxman said, the number one reason is because they did not feel they belonged.

But community-building is central to Conrad Grebel’s mission, she said. Faculty, staff and students share a common meal at supper each Wednesday.

It’s in Mennonite theology and “in our practice of serving others,” she added, citing Bluffton’s “Creating Together” initiative as another example. Quoting university President James Harder, she said: “ ‘Creating Together’ is Bluffton’s style of producing a total educational experience that is not something that is done to you or for you but with you.”

Huxman and her husband, Jesse, the communication director for Mennonite Foundation of Canada, have three children, including Emily, a sophomore at Bluffton.