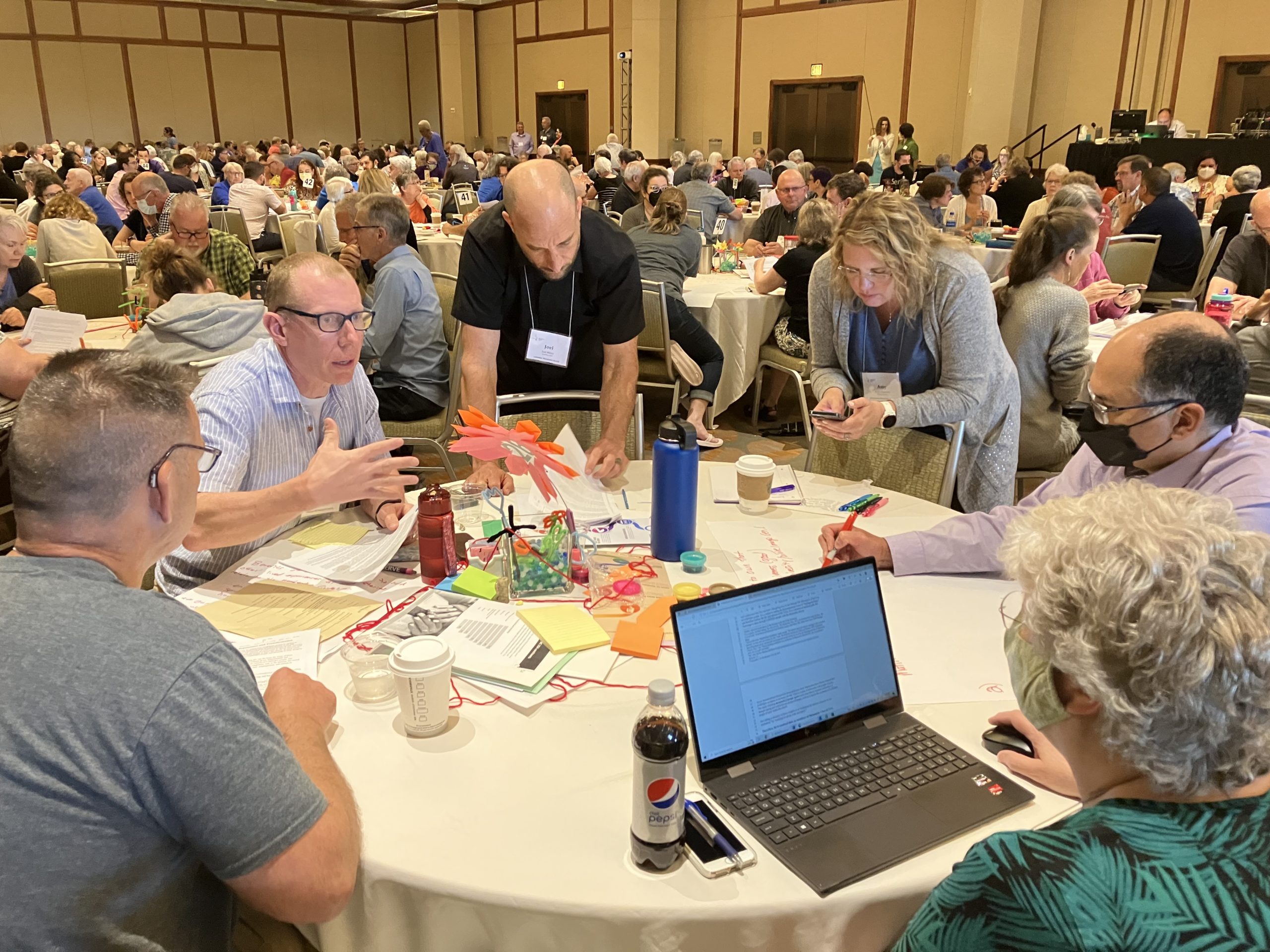 Mennonite Church USA delegates on May 29 in Kansas City, Mo., repealed the denomination’s Membership Guidelines, a 20-year-old document that prohibits pastors from officiating same-sex marriages, and approved a wide-ranging statement affirming LGBTQ inclusion and confessing that exclusion has caused harm.

In the morning, delegates voted 404-84, or 82.8% in favor, to “retire” the Membership Guidelines. This resolution came from the Executive Board and mandated no further action beyond repealing the guidelines.

In the afternoon, delegates voted 267-212, or 55.7% in favor, to approve a “Repentance and Transformation” resolution, written by the Inclusive Mennonite Pastors group. This resolution not only “rescinds” the guidelines but also confesses harm, affirms the spiritual gifts of LGBTQ people and commits to inclusive actions.

The resolution says current MC USA policies “do violence to LGBTQIA people by failing to affirm their full, God-given identities.”

Delegates made the decisions during a special assembly May 27-30 at the Westin Hotel.

Repealing the Membership Guidelines aligns policy and practice, because the majority of MC USA’s area conferences do not enforce the ban on pastors officiating same-sex marriages.

After conferring in 77 table groups, dozens of the 506 delegates lined up to speak at mics at the front of the hall.

Discussing the “Repentance and Transformation” resolution, delegates expressed desires to be a more inclusive church, follow Scripture and maintain unity.

“We have treated gay, lesbian and queer people as objects and not as human beings,” said Leann Toews of Tabor Mennonite Church, Newton, Kan. “Let’s admit that we have caused harm.”

Lesley Paparone of Bethany Mennonite Church, Bridgewater Corners, Vt., said the resolution promoted justice and peace, the beliefs that drew her to the Mennonite church.

“Mennonites know peace requires action,” she said. “We believe this resolution takes steps toward justice, and justice is the only way to the purest form of peace.”

Several delegates spoke against the resolution because they believed it will cause division.

“Passing this resolution as it is will draw the circle smaller,” said Caleb Schrock-Hurst of Parkview Mennonite Church in Harrisonburg, Va. He also said the church “must be honest about the grievous harm it has done to LGBTQ people.”

Dwight McFadden of Millersburg Mennonite Church in Ohio asked delegates to reject the resolution and consider one in the future that is more unifying.

“We need both the traditional and the progressive. We cannot do this work if we don’t have both,” he said. “I don’t feel like this is the third way that we are known for.”

Luke Holsopple of East Goshen Mennonite Church in Indiana said a greater theological question — How do we interpret the Bible? — was at stake.

“As a young person, it is sad how things have changed in my young lifetime,” he said. “The forces of Satan are real. What better way to destroy and divide our church than to attack the foundations of our beliefs?”

Sunoko Lin of Maranatha Christian Fellowship, Reseda, Calif., said he could see that the resolutions to repeal the Membership Guidelines were nonnegotiable to some people, and this made him wonder if he was welcome in MC USA.

Amy Zimbelman of Mountain States Mennonite Conference said her conference was the first in MC USA to ordain an openly gay pastor.

“It has been beautiful to see what happens when congregations that profoundly disagree with each other stay together,” she said. In Jesus’ ministry, she said, “it was a sign of the kingdom of heaven that the marginalized were brought to the center.”

Before the final vote, a motion to table the resolution failed, receiving 25% support.

In the morning, delegates discussed the Executive Board resolution to “retire” the guidelines.

Cynthia Lapp of Hyattsville Mennonite Church in Maryland said that when MC USA was founded 20 years ago and the previous denominations had a hard time coming together, “the LGBTQ community became a common enemy we could build our church on” — but “they are not our enemy, they are us.” She said she hoped the church would unite against common enemies like white supremacy or gun violence rather than fighting among itself.

Lauren Thompson of North Baltimore Mennonite Church in Maryland said the Membership Guidelines caused harm and “even though they are not enforced all the time, it is still harmful to have these policies in place, because if we want to be peaceful and love each other we can’t do harm to one another.”

Steffen Sommers of Ridgeview Mennonite Church in Gordonville, Pa., said he supported repealing the guidelines because it would “correctly place the power back in conferences’ hands.”

Ken Burkholder of Souderton Mennonite Church in Pennsylvania said he felt tension because, while it made sense from a polity standpoint to retire the guidelines, to do so would also make a theological and biblical statement about marriage.

Kyle Rogers of Franconia Mennonite Church in Telford, Pa., criticized the Executive Board for not asking delegates to open their Bibles as they talked. He said the church was missing an opportunity to use Scripture in the correct way, and “we have moved to being anti-Bible.”

“There’s a way to hold conviction and compassion together,” he said.

Tomas Ramirez of Orlando, Fla., said he hoped the church would preserve the rules contained in the Membership Guidelines.

“My battle is not against the gay community,” he said. “I love them. We are losing our focus. The world outside is being lost, and we are fighting among each other.”

Andrew Rissler of Atlanta Mennonite Fellowship in Georgia said he had “seen nothing but God’s everlasting love” in a gay married couple he knows. The question, he said, is “whether the Holy Spirit is moving in this community. I think it is. I know it is.”

The special delegate session concludes Monday morning with discussion of a resolution on “Justice in the U.S. Criminal Legal System” and action on a resolution on accessibility for people with disabilities.