Advocates for deported Iowa Pastor Max Villatoro were hopeful after meeting with lawmakers in Washington, D.C., March 20-21, the one-year anniversary of his deportation. 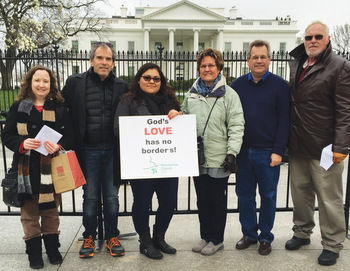 When he was deported on March 20, 2015, Villatoro was co-pastor with his wife, Gloria, at Iglesia Torre Fuerte (Strong Tower Mennonite Church), a Central Plains Mennonite Conference congregation in Iowa City.

Villatoro was licensed for ministry in 2012, and conference leaders had been working to gain legal status for him. Two members of the Washington delegation, David Boshart and Shana Peachey Boshart, are Central Plains conference ministers.

With the help of Mennonite Central Committee Washington Office and Church World Service, the delegation held a prayer service in front of the White House, held briefings for the House and Senate, visited congressional offices and spoke with Department of Homeland Security officials.

“Having met face-to-face with immigration policy officials in Washington, I became newly aware of the urgency of our situation,” David Boshart said. “The contacts we’ve made in the federal government could all change when the Obama administration ends, and we may then find ourselves starting over building bridges to the people who can bring Max home.”

“There are folks in the government, the press and the public who see Max’s case as an important example of what is broken and needs to be fixed in the immigration system,” she said.

Villatoro’s lawyer, David Leopold, said: “I’ve never had a case where there’s been such continued community involvement. In this case, the public hasn’t gone away and is continuing the fight to get him back here and right the wrong.”

The delegation briefed staff of Iowa senators Charles Grassley and Joni Ernst on a Nov. 20, 2014, DHS memo that requires Immigration and Customs Enforcement to make deportation arrests on a case-by-case basis according to specific enforcement priorities.

“We pointed out that Pastor Max is a clear example of a person who did not pose a security risk,” Peachey Boshart said.

Two couples from Central Plains Conference — Grant and Edie Nebel and Don and Shirley Kempf — traveled to San Luis, Mexico, to visit Villatoro in early March. He is working with Cueva de Adulam (Cave of Adullam), a shelter for women and children, as he discerns the next steps for him and his family.

“Max’s testimony of God’s faithfulness, in spite of the circumstances, was inspiration,” Edie Nebel said.

The group Friends of Pastor Max is advocating on Villatoro’s behalf.