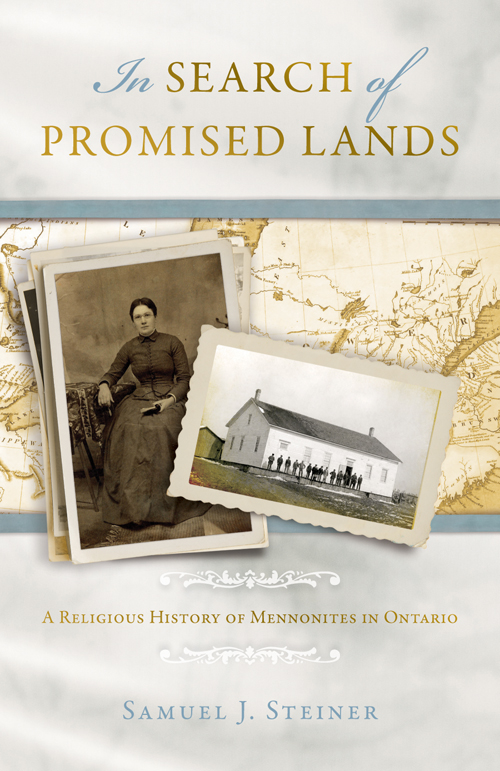 In Search of Promised Lands

The “promised lands” of Sam Steiner’s comprehensive history of Mennonites in Ontario are both geographical and spiritual destinations. Ontario was a land of opportunity for Mennonites who came from Pennsylvania and Europe. The choices these people made to live out the implications of Christ and the Bible as they understood them represented a pilgrimage of Christian faithfulness. Religious options included revivalism, fundamentalism and Pentecostalism.

In Steiner’s telling, even spiritual places beyond the Mennonite church constituted a kind of promised land. While he records details of church splits and lamentable behavior of some church members and leaders, he does not dwell at length upon the ironic ways that Mennonite decisions and actions had results that were different than intended.

The decades from the 1830s to the 1870s were a time of religious renewal and church division. The pietist movement’s emphasis on crisis conversion and assurance of salvation competed with commitments to discipleship and faithful living.

In later decades, challenges included the shift from German to the English language, the use of musical instruments in the home, Sunday schools and the convening of evening meetings. In 1889 a division in the Waterloo district was triggered by disagreement over the proper meeting time for the annual conference.

Ontario Mennonites were not prepared for World War I and learned slowly the value of cooperation in facing the government. A Military Service Act of 1917 confused matters with ambiguous language about “exemption” and “exception.” The war crisis and the challenge of war relief prompted Mennonite unity, even as issues of theology and nonconformity continued to divide.

World War II was a more focused and positive experience for Ontario Mennonites. They cooperated in alternative service programs and benefited from war­time and postwar prosperity.

Religious diversity is one of the book’s major themes. In 1941 there were 12 Mennonite and Amish bodies in Ontario. They fit into three basic streams.

One stream was composed of the descendants of Mennonite migrants from Pennsylvania in the late 18th and early 19th century. Within this stream there was substantial variety, including the rapidly changing Mennonite Brethren in Christ, who in 1947 gave up the name Mennonite and became the United Missionary Church.

The third stream was Dutch-Russian refugees from the Soviet Union in the mid-1920s. Their identity had been formed in a vastly different cultural environment, and they were trauma-tized by warfare and revolution. They could hardly understand, or be understood by, Mennonites of Swiss background who had their own worship patterns and means of maintaining separate identity.

Assimilated Mennonites worked to preserve their identity through new institutions, even as traditionalist Mennonites preserved theirs by separation from worldly ways. One worldly change late in the 20th century among progressive Mennonites was opening the opportunity for women in leadership. Acculturated Mennonites justified change by the need to attract and hold church members. But conservative churches grew more rapidly than the progressives.

Steiner begins nearly each chapter with an interesting personal story, most often about women. This is a religious history that includes information about daily life as well as about church institutions and religious conviction. The account extends beyond the province to tell of relationships with Mennonites in the United States and western Canada.

In such a richly detailed book, a few errors are bound to creep in. For example, Orie Miller did not deliver Mennonite Central Committee material aid in Halbstadt in 1922, as stated on page 240. But In Search of Promised Lands deserves to be considered a reliable historical source.

In 1988 there was a merger of groups of Swiss-Amish, Swiss-Mennonite and Dutch-Russian background for projects of education and mission. This body, Mennonite Church Eastern Canada, has managed to accept social and theological differences and, more recently, to avoid tearing itself apart over the issue of gay marriage.

Since the publication of this book, Steiner had extended his audience by the creative use of digital publication. On his website, ontariomennonitehistory.org, he posts sections of special interest from the book and from his public speeches about the book. This bridge from comprehensive print publication to more topical and anecdotal digital publication may be a model for authors of Mennonite history books in the future.

Steiner served as archivist at Conrad Grebel University College in Waterloo, Ont., from 1974 to 2008. For 16 years he was managing editor of the Global Anabaptist Mennonite Encyclopedia Online.

From growing fruit in Oregon to growing churches in West Africa

With promise of peace unfulfilled, Colombians call for solidarity