Last Sunday, a friend of mine got up and shared about the detention of Phil Rizk, a German-Egyptian activist and journalist. Phil had roomed with my friend at Wheaton College and was a best man at his wedding. And now he was in secret detention in Egypt. Two days before he was picked up by an unmarked vehicle during a Gaza solidarity protest. The Egyptian police weren’t giving out any information as to his whereabouts. The only information his family could get was confirmation that he was being held.

What could friends in the US do to support Phil? Like many, they turned to Facebook. In recent years, Facebook has become a tool of choice for campaigners around the world, including Egypt. Last October, Wired magazine ran an extensive article on Egyptian activists who were organizing on Facebook to challenge the repression of the Egyptian government. Now, people from around the world joined the Free Philip Rizk group on Facebook.

For those not familiar with Facebook, it describes itself as a tool for mapping social relationship. When friends of Phil began inviting their friends to join the Free Phil group, these friends in turn could invite their own friends to join at the click of a button. Some people replaced their profile photos with a Free Phil banner so that anyone looking at their profile would see the image. By the time I saw the group on Monday morning there were thousands of members. As of today, there are 7,662 members.

But what’s the point of all this virtual organizing? What good does it do? For one, it allowed news to spread very quickly as updates on the situation developed. For example, on Monday morning accounts of intimidation and draconian searches was posted:

At 1:30am when we had just gone to bed the doorbell rang. 5 plain clothed men and two in full riot gear and machine guns stood outside our door. They wanted to enter to search the house. We found out that they were looking for evidence against Philip. Two men entered and began searching through the papers of our home office. In the meantime we contacted a German Embassy official and a professor from AUC as well as some friends. They all came immediately many others were awake and praying.

For 7 years now, our own government has itself used secret, indefinite detention and harsh interrogation tactics. Some of the CIA’s extraordinary rendition trips ended up in Egypt. One CIA officer was quoted as saying , “If you want them to be tortured, you send them to Syria. If you want someone to disappear — never to see them again — you send them to Egypt.” It’s clear if we’re going to work against this kind of repression we have to look somewhere beside governments.

Facebook lends itself to precisely the kind of spontaneous, self-organizing action that bypasses our politicians. On Sunday evening as I began to get invitations to a vigil at noon on Monday outside the Egyptian consulate in Chicago. I RSVPed to the Facebook page and saw that already dozens of people had responded. Monday afternoon I headed over to the Egyptian consulate to see whether a public vigil really could be organized so quickly. When I arrived I was quite impressed with the 30 or 40 so people there carrying signs and walking up and down the side walk. While it wasn’t 160 who had said they would attend on Facebook, it was more then I’ve seen at many public actions in Chicago. And this with less then 24 hours notice! 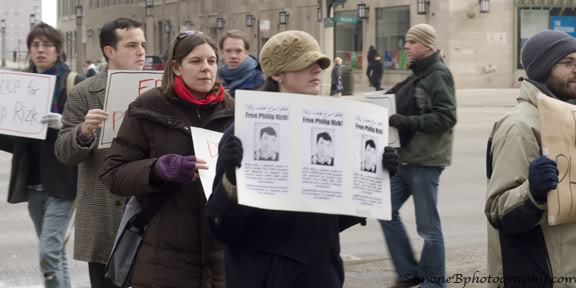 Photo from the vigil outside the Egyptian consulate in Chicago. photo by Simone Bogode

Two days later we got the news that Phil had been released. His account of his captivity was disturbing. He was subjected to intense interrogation and spent most of his time blindfolded and handcuffed. However, one part was very encouraging.

At one point one of my interrogators- they called him “Malek”- ended a session by saying, “the next time you will tell me about all these international relationships of yours,” I had no idea what he was referring to. I really believe that the pressure from so many places and people made a big difference in my quick release.

It’s good to know that our actions did make a difference. If everyone down to the lowly interrogators knew about it, someone in the Egyptian government must have really felt the heat. At the same time, Phil also reminds us that not everyone has the privilege of international connections.Diaa Eddin Gad, an Egyptian blogger taken at the same time as Phil, is still being held. And so, we continue to pray and act.