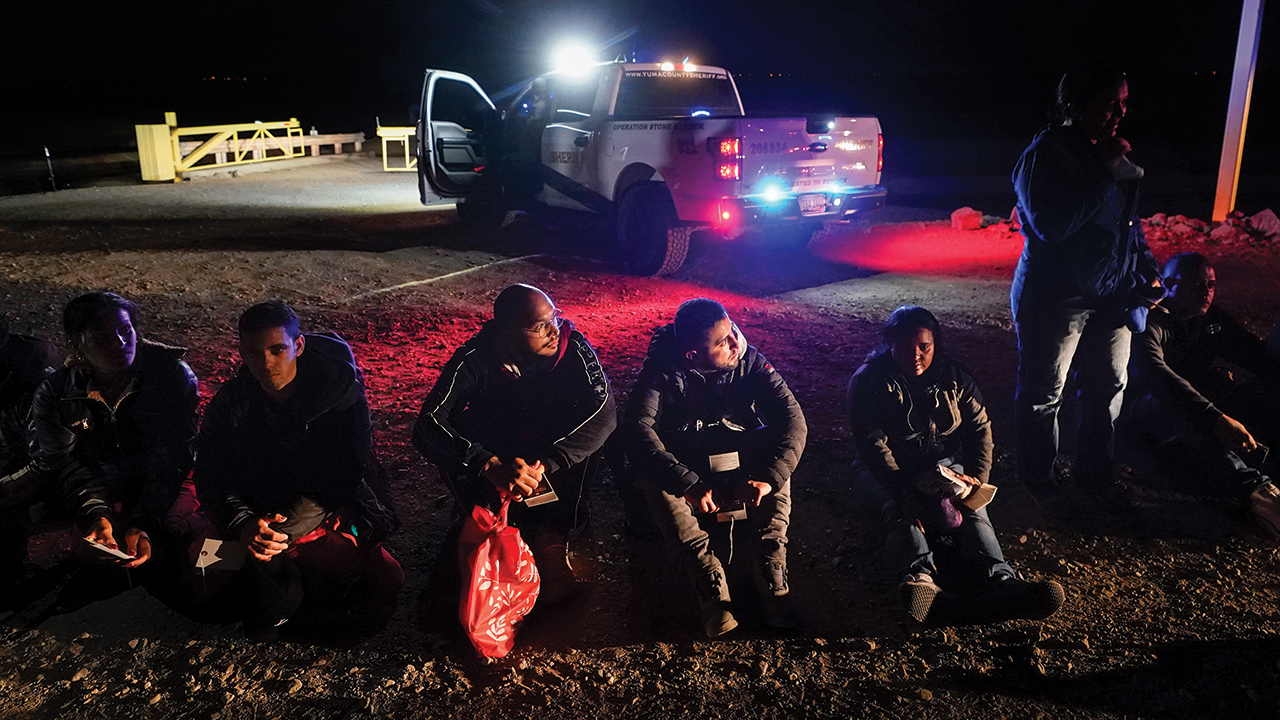 Migrants wait to be processed after crossing the border Jan. 6 near Yuma, Ariz. — Gregory Bull/AP

Faith-based organizations and congregations pleaded with the Biden administration, in a letter sent Jan. 23 to President Joe Biden and other leaders, not to enact new immigration restrictions.

Mennonite Central Committee U.S. is one of the signers.

While those policies expand a program offering humanitarian parole to Venezuelans to include individuals from Nicaragua, Haiti and Cuba, they also include a proposal to ban people from seeking asylum if they enter the U.S. without inspection or do not seek protection in other countries along the way, the letter said.

The administration has said it plans to launch an app that individuals can use to schedule an appointment for inspection instead of coming directly to a U.S. port of entry in order to reduce wait times and crowds at the border.

The letter urges the Biden administration not to move forward with what it calls an “asylum ban,” calling it “harmful, inhumane and deadly for the most vulnerable.”

“We are called by our sacred texts and faith principles to approach one another with love — not fear,” the letter reads. “Our diverse faith traditions compel us to love our neighbor, accompany the vulnerable and welcome the sojourner — regardless of place of birth, religion, or ethnicity. Importantly, our faiths also urge us to boldly resist and dismantle systems of oppression.”

Parole is no substitute for access to asylum, according to the letter.

Signers include three of the six faith-based agencies that partner with the U.S. government to resettle refugees: Church World Service, HIAS (formerly the Hebrew Immigrant Aid Society) and Lutheran Immigration and Refugee Service.

Several denominations signed the letter, including the Evangelical Lutheran Church in America, Presbyterian Church (USA) and United Church of Christ. Other signers are the American Friends Service Committee; General Board of Global Ministries and General Board of Church and Society of the United Methodist Church; Hindus for Human Rights; Anti-Defamation League; Christian Reformed Church Office of Social Justice; National Council of Churches; NETWORK Lobby for Catholic Social Justice; Union for Reform Judaism; and Unitarian Universalists for Social Justice.

On a call hosted by the Interfaith Immigration Coalition and #WelcomeWithDignity Campaign, Krish O’Mara Vignarajah, president and CEO of Lutheran Immigration and Refugee Service, shared a number of misconceptions people have about those seeking humanitarian aid.

Not all have valid passports, access to a cell phone, reliable Wi-Fi or a willing sponsor in the U.S. in order to take advantage of pathways to enter the country, Vignarajah said. For many, their best option is to make an often dangerous journey to the U.S. border to seek asylum.

“That is a high hurdle to clear — one that borders on a wealth test for some of the most vulnerable children and families facing immediate danger,” she said.

Mark Hetfield, president and CEO of HIAS, said his organization is old enough to remember a time before the U.S. had laws allowing people to seek asylum in the country. Hetfield pointed to 1939, when he said the Franklin D. Roosevelt administration refused to allow a ship carrying 900 Jewish passengers who were fleeing Nazi Germany to dock in Florida. It returned to Europe, where 254 of those passengers perished in the Holocaust.

That’s why the United Nations established — and the U.S. adopted — the Refugee Convention, he said, “asserting that never again would people be trapped inside of their country of persecution.”

The Biden administration’s proposal would place the asylum laws the U.S. now has “out of reach” for many, Hetfield said, which he called “immoral.”