Vanessa Hofer for The Mennonite 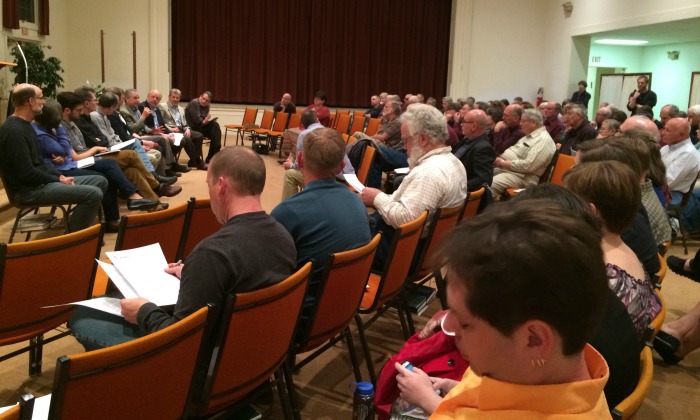 Five proposals for how churches might move forward following the withdrawal of Lancaster Mennonite Conference from Mennonite Church USA were presented to an assembly of over 100, representing 18 congregations and five conferences, at Witmer Heights Mennonite Church, Lancaster, Pa., on April 14.

The meeting was led by the informal “LMC-MC USA group” and followed an initial conversation in January. Meeting attendees received a feedback form to rank each proposal individually on a sliding scale based on whether they felt the idea deserved further exploration.

Todd Gusler, pastor of Rossmere Mennonite Church in Lancaster and one of the conveners of the LMC-MC group, opened the evening with prayer and a word of welcome.

“People have wondered, If we leave our current conference where would we go? Our hope is that tonight, some of these options might be able to take form,” Gusler said. He added that the meeting was one piece of a much larger discernment process. “If you’re looking to have things settled tonight, you’ll be disappointed,” he said.

Keith Weaver, executive conference minister for LMC, spoke first. He expressed desire for churches to stay with LMC, although, “It’s less about which conference you land in and more important that you find the right home for you,” he said. When asked about future inclusion for women in ministry within LMC, Weaver said, “What you have known about Lancaster Conference in the past will not be the Lancaster Conference of the future.”

Richard Mininger, LMC bishop from the Harrisburg District, spoke second, proposing a setup in which congregations would remain affiliated with both LMC and MC USA. In this plan, LMC would offer services that include credentialing and oversight, while churches would continue involvement in national programs, such as the Constituency Leaders Council and general assemblies.

“This is a rather unconventional approach, but not one that would require special bylaws or special accommodations,” Mininger said. Immediate questions from attendees suggested further exploration of what would be required regarding certain logistics, including credentialing processes.

Third to speak was a team representing Atlantic Coast Conference, led by Merv Stoltzfus, executive conference minister. The group shared what they felt best described their conference: a focus on relationships, emphasis on youth development and a strong affiliation with MC USA. Any and all congregations interested in joining their conference were welcomed.

Although that plan was ultimately discarded, King suggested that core components—such as a “centered model” in which core values are explicit and congregations are invited to journey at their own speed toward that goal—could prove helpful, whether in creating a new conference or joining an established one.

Low overhead costs, gender equality and diverse representation were a few of the key characteristics of this final proposal.

“We…commit to a culturally integrated model because we believe that broadening our leadership base to be as inclusive as possible will have a greater impact,” the group’s written statement explained.

The proposal also included a peer-coaching model, in which pastors would meet with trained peer coaches to discuss and reflect on topics, including spiritual formation, pastoral practice and personal formation. Meetings would be ongoing and confidential. According to Hostetter, this type of oversight and nurturing would better serve the preferred style of millennials, the church’s next generation of leaders.

Following a brief overview of each proposal, Jonathan Bowman, pastor of Landisville Mennonite and an active part of the LMC-MC USA group, moderated a question-and-answer time.

An overwhelming majority of the questions asked by the congregants were directed to the team from ACC or the group representing the second Pennsylvania Conference option.

Questions revolved largely around the pros and cons of starting anew versus joining an established entity.

When asked if ACC is truly willing and able to welcome a potential onslaught of congregations, the ACC panelists replied strongly, “Yes.”

Shantz, meanwhile, encouraged listeners to consider the bigger picture in Pennsylvania, noting that the unrest likely extends further than LMC. “I don’t want us to go off to ACC and neglect our brothers and sisters,” he said.

As Gusler had predicted, two-and-a-half hours later, the meeting adjourned with much to consider and no clear preference.

Dawn Ranck Hower, pastor of New Holland (Pa.) Mennonite Church and another LMC-MC USA convener, remarked, “I was encouraged by the open and friendly attitude of all who participated in the meeting, both the presenters and the leaders from the churches.”

Each congregation will continue to discern next steps, and the LMC-MC USA group will assess the completed surveys and share results and feedback with attendees.

“If there’s significant interest in one or more of the options, the agenda for future meetings of the LMC-MC USA group may be focused on further clarifying whether the options are viable,” Gusler said. “Our hope is that the LMC-MC USA group can, along with providing the connection to the rest of MC USA, be a place of support as congregations make some important decisions. The meeting was another way of providing just that.”