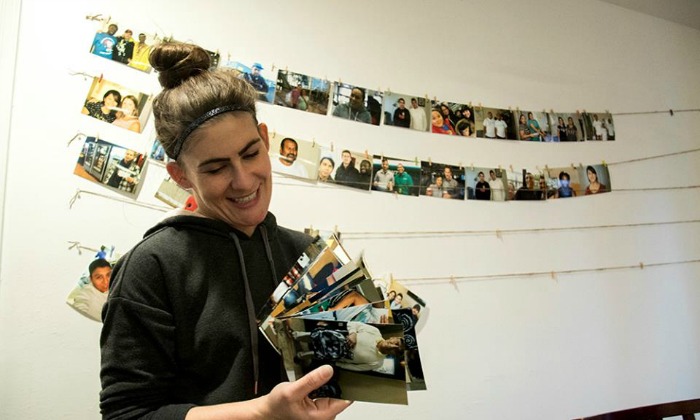 Some years ago, on a service trip to Swaziland, Africa, Sarah Jackson learned a lot from people there.

They introduced her to two phrases that have helped her in her ministry. One is, “Flexibility is your friend; expectations are your enemy.” The other: “It’s not right, it’s not wrong, it’s just different.”

Jackson is the founder of Casa de Paz (house of peace), which offers free housing and support for families and individuals recently released from the immigration detention center in Aurora, Colorado.

She started this ministry in April 2012, as she observed families coming and going from the detention center near her apartment.

Jackson has had to learn to be flexible. There is no typical day, she said in a June 14 interview. “Some days nothing much happens,” she said. “Other days you might have 40 guests or 10 volunteers.”

Some guests are excited, talkative and are there until late in the evening. They may be singing praise songs for their freedom. Other guests are quiet and don’t want to talk. They just sit there until their flight leaves. “We never really know what’s going to happen,” she said.

Her commitment to helping immigrants was sparked several years ago when she traveled to the U.S.-Mexico border with an organization working on immigration justice. She spoke with deportees and attended deportation hearings through Operation Streamline. As she learned about people’s reasons for migrating and the dangers they face in doing so, she said she felt she had to do something.

When she returned to Aurora, she decided to open her home to immigrants being released from the detention center. She began in a one-bedroom apartment directly across the street from the center, she said. Now she rents a house a five-minute drive away. She and volunteers go to the detention center at 6 p.m. each day to pick up whoever is released.

The detainees normally have family or friends that live in the United States. When they get out, they’re often trying to get to their families. They’ve either won their asylum case or been released on a bond that may run from $1,500 to $20,000. If that’s the case, they’ll have to come back for a hearing. While people wait for family members or friends to come pick them up, they often have nowhere to go—nowhere except Casa de Paz.

Often, guards will let them people know about Casa de Paz when they are released. They may also hear from ICE (Immigration and Customs Enforcement) officers or lawyers. Jackson said she’s developed good relations with guards and ICE officials over the years and overcome their initial suspicion.

She’s learned that it’s not a simple us vs. them situation. “If immigrants deserve to be treated as human,” she said, “so do the guards.”

Back in April, a guard called her at 7 p.m. to let her know about a recently detained man who had nowhere to go. She (the guard) said she would have walked the guy to Casa if she knew where it was.

Many family members and friends of detainees hear by word of mouth about Casa de Paz. They learn that there is a clean, welcoming place for them to stay for free while they visit their loved ones at the detention center. Many of them suffer financial hardship and travel hundreds of miles to reach Aurora.

Casa de Paz depends on volunteers—about 230 of them. Volunteers do various tasks: Some make meals or donate clothing or clean the house or transfer people. Probably half the volunteers come from churches, she said, since she speaks in many churches.

First Mennonite Church in Denver was the first church to donate money to Casa de Paz. When it first began, that congregation paid the first three months of Casa’s rent.

Volunteers learn to know immigrants and their families and see how they are treated in this country,

Jackson said. Situations they read about in the news become real to them when they meet immigrants and hear their stories.

Jackson talks about one immigrant from Ghana who converted to Christianity and was attacked by a group of radical Muslims. He fled his home country and came to the United States. When he got out of the detention center, he stayed at Casa de Paz for a while. His case reminded her of the Hebrews verse (13:2) about “entertaining angels without knowing it.”

For Jackson, “the way I worship is through serving.” Not everyone who comes to Casa de Paz is Christian. Some are Muslim, some are atheist.

Jackson grew up Austin, Texas, then moved to Colorado Springs at age 15. When she was 12, she converted to the Greek Orthodox church. Then at 19, she dated a man who went to a nondenominational church. When she took that trip to the border, she said, she was working as a pastor’s assistant at a nondenominational congregation.

“As I get older,” she said, “I can find God in many different churches.”

She said she chooses to follow the words of Jesus. She doesn’t go to a specific church but visits many, including Mennonite, nondenominational and Unitarian Universalist.

In 2013, Jackson started Volleyball Latino, a volleyball league meant to help support the work of Casa de Paz. The league morphed into Volleyball Internacional this year. This volleyball league, in which the majority of players are immigrants, has grown from 6 to 70 teams.

Casa has no paid staff, other than volleyball referees, who are paid by the teams. Right now, Jackson said, they are saving all the money they bring in from donations or from the volleyball league to buy a house. In future, she said, they may then hire someone to direct the league.

Jackson said the days are long, “super long.” But when she closes her eyes at night, she sees that dad who hasn’t seen his kids for six months and whose family is on their way to pick him up. Jackson says it’s the best feeling to see families get back together.