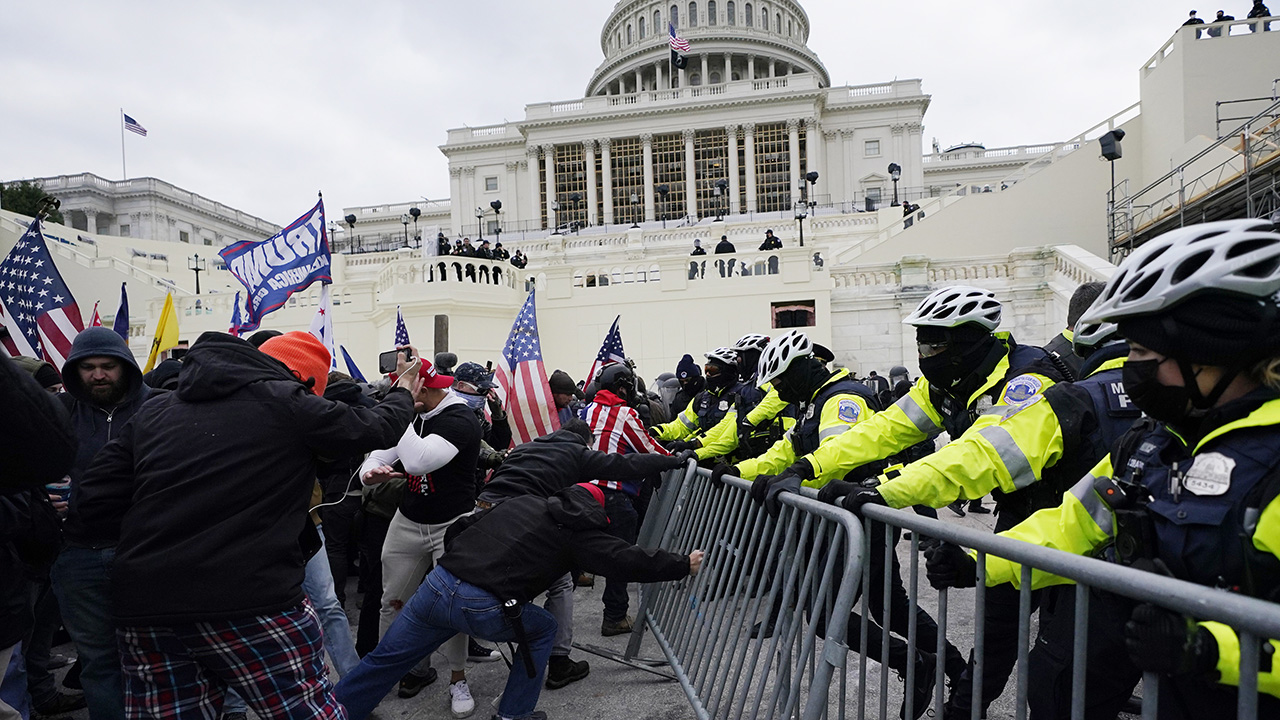 Trump supporters try to break through a police barrier on Jan. 6 at the Capitol in Washington. — Julio Cortez/AP

Moments before the assault on the U.S. Capitol began on Jan. 6, a mass of Trump supporters gathered at a northwest entrance. They were angry: Footage highlighted the presence of Proud Boys, an organization classified as a hate group by the Southern Poverty Law Center, who were shouting one of their favorite chants: “F— Antifa!”

As throngs surged toward a barricade manned by a vastly outnumbered handful of police, a white flag appeared above the masses, flapping in the wind: It featured an ichthys — also known as a “Jesus fish” — painted with the colors of the American flag.

Above the symbol, the words: “Proud American Christian.”

It was one of several prominent examples of religious expression that occurred in and around the storming of the Capitol, which left five people dead. Before and even during the attack, insurrectionists appealed to faith as both a source of strength as well as justification for their assault on the seat of American democracy.

While not all participants were Christian, their rhetoric often reflected an aggressive, charismatic and hypermasculine form of Christian nationalism — a fusion of God and country that has lashed together disparate pieces of Donald Trump’s religious base.

“A mistake a lot of people have made over the past few years . . . is to suggest there is some fundamental conflict between evangelicalism and the kind of violence or threat of violence we’re seeing,” said Kristin Kobes Du Mez, a history professor at Calvin University and author of Jesus and John Wayne: How White Evangelicals Corrupted a Faith and Fractured a Nation.

A form of this faith was on display in front of the Capitol the day before the attack, when Trump supporters marched around the Capitol, shouting and blowing shofars as a protest against the 2020 presidential election results.

Some marchers followed a woman waving a white flag emblazoned with a tree and the slogan “An Appeal to Heaven.” The flag has become a banner for Christian nationalism: First waved during the American Revolution, it is said to be a reference to an argument by British philosopher John Locke, who suggested that — just as the biblical figure Jephthah led the Israelites in battle against Ammon — so too do individuals retain the right to “appeal to heaven” and wage revolution.

Andrew Whitehead, co-author of Taking America Back for God: Christian Nationalism in the United States, argued such appeals are commonplace in evangelical circles.

“Christian nationalism really tends to draw on kind of an Old Testament narrative, a kind of blood purity and violence where the Christian nation needs to be defended against the outsiders,” Whitehead said. “It really is identity-based and tribal, where there’s an us-versus-them.”

Indeed, antagonistic religious imagery was easy to spot at the Capitol raid the next day. One insurrectionist photographed in the building’s rotunda wore military fatigues with a patch on the shoulder that showcased a cross and the words “Armor of God.” Just below was another patch featuring a slogan wrapped around a stylized skull used by the comic book character The Punisher: “God will judge our enemies. We’ll arrange the meeting.”

One person who claimed to have been among the attackers, 36-year-old West Texas florist Jenny Cudd, posted a video on Facebook discussing how she “charged the Capitol with patriots,” exclaiming “f— yes I’m proud of my actions.”

She concluded her more than 20-minute video with an outline of her religious beliefs.

“To me, God and country are tied — to me they’re one and the same,” she said. “We were founded as a Christian country. And we see how far we have come from that. … We are a godly country, and we are founded on godly principles. And if we do not have our country, nothing else matters.”

Whitehead was shocked by the video, but not surprised. He said Cudd’s explicit fusion of God, country and Trump is a “perfect” example of Christian nationalism, but those who invoked it while storming the Capitol are but an extremist subset of a much larger group — one that doesn’t stop at the boundaries of evangelicalism.

“Extremism of any form, whether it’s religious or not, can only really flourish if it’s allowed to,” Whitehead said. “So with 50% of Americans being relatively favorable toward understanding the U.S. as a Christian nation, or even that Christianity should be favored, it creates a situation where those that want to take that view even further can do that.”

Some evangelicals condemned the faith expressions seen on Capitol Hill. Hundreds of faculty and staff at Wheaton College, an evangelical school, signed a statement decrying the “blasphemous abuses of Christian symbols” during the attack.

But evangelicalism is a tree with many branches. Anthea Butler, associate professor of religion at the University of Pennsylvania, pointed to Jenna Ryan, a real estate broker from Frisco, Texas. Ryan livestreamed herself as she entered the Capitol with other insurrectionists. As she crossed the threshold, she can be heard declaring, “Here we are, in the name of Jesus! In the name above all names!”

Butler argued that the Ryan’s words are emblematic of Pentecostal or charismatic Christianity, which is both a part of evangelicalism and distinct in important ways. Many of Trump’s faith advisers, such as Florida pastor Paula White, hail from charismatic traditions that place an emphasis on prophecy and “spiritual warfare.”

“To say ‘in the name of Jesus’ — that’s calling protection, but it’s also calling power,” Butler said. “So in other words, ‘Jesus has given us the power to bust into the Capitol.’ ”

In another video posted on Twitter, a man near the south side of the Capitol can be seen speaking to onlookers as hundreds stand atop the Capitol steps. While two Christian flags — white banners with a red cross in the corner — waved in front of him, he can be heard saying: “Donald Trump coordinated it. We’re his surrogates. He fought for us and we have to fight for him.”

He then glances at the flags before adding what sounds like “Jesus loves us.”

All scholars who spoke to RNS said Christian nationalism and hypermasculinity often overlap with forms of white supremacy. Proud Boys leader Enrique Tarrio, for instance, was arrested in January after he and members of his group tore a Black Lives Matter sign from a Washington church in December and burned it in the street. But the Proud Boys who appeared in Washington on Jan. 6 insisted they drew strength from God: As they approached the Capitol, Proud Boys — some donned in camouflage or military-style helmets, others gripping weapons such as a baseball bat — paused for a moment of prayer.

As they knelt, a man with a bullhorn prayed: “We pray that you provide all of us with courage and strength to both represent you and represent our culture well.”