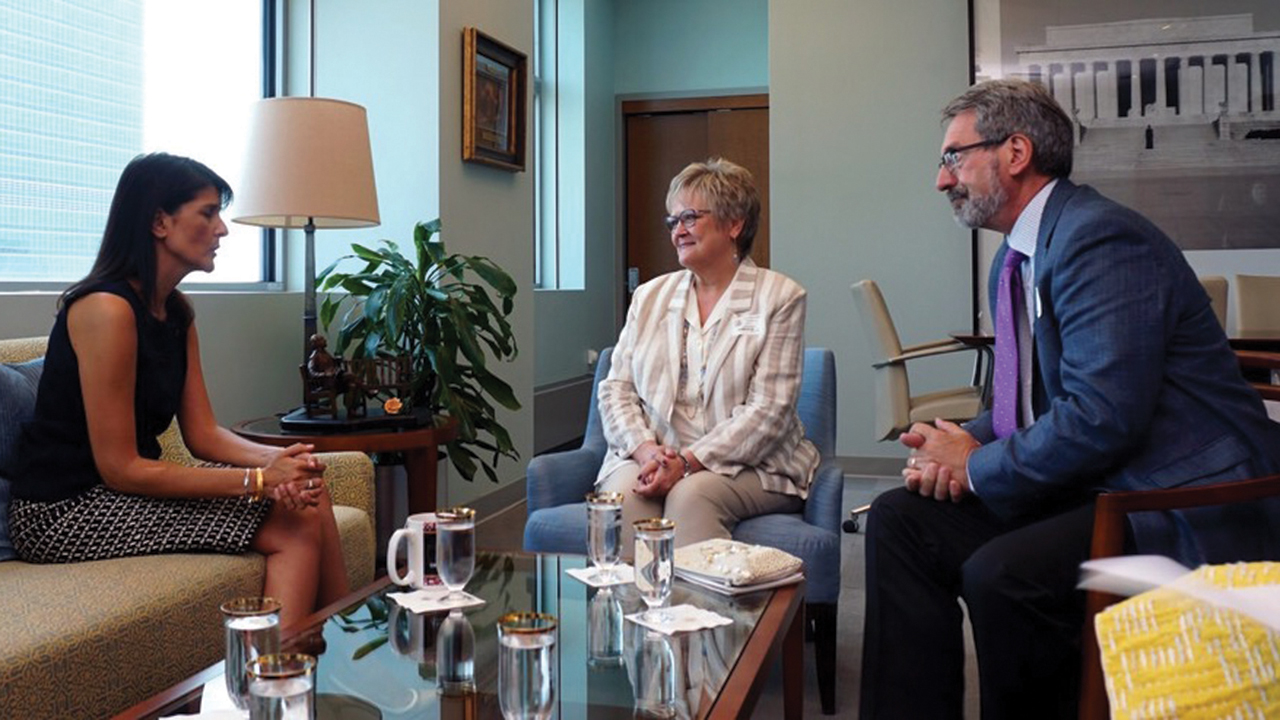 For someone who seemed to be always on the move, Michael “MJ” Sharp was known for his ability to form relationships.

The publication in January of a book about his international efforts to make peace — on the cusp of the five-year anniversary of his death while working for the United Nations in the Democratic Republic of Congo — has served as an opportunity for his parents to reflect on the challenges of giving order to the profound diversity of those relationships.

“There’s just no way anyone could represent who he was between the ­covers of a book,” said his mother, Michele Miller Sharp, at her Hesston, Kan., home in December. “Even some of his closest U.S. friends said after the [2017] memorial, ‘Did I even know him?’

“[Author] Marshall King did an incredible job, but the book can’t tell the whole story. It does a great job telling the story it does tell.”

“The things he would often focus on were his faux pas where he screwed up,” John recalled of his son’s visits. “He wouldn’t tell us about his successes. That’s what we learned later. The numbers from work with partners with militias — that 1,600 militia members and 23,000 dependents walked away from violence based on work by him and his team — we learned that from NPR.”

Congolese colleague Serge Lun­gele shared a dramatic episode with the Sharps that their son never told, despite his love of a good story.

“He and Serge found a bus parked across the road,” John said. “They saw masked, armed people robbing passengers lying in the road. Serge was shaking in his seat, and MJ got out. He walked up and asked, ‘How can you do this to your own people who have so little?’ And they walked away.

“MJ gets back in the car, and Serge said, ‘Why did you do that?’ He said, ‘The worst that could happen is that we would be kidnapped. If that happens, my country will come looking for me. And if they kill us, then our blood can help to heal this land.’

“I asked Serge, ‘Did anything change?’ He said yes.”

“The depth, the integrity, the intentionality of relationships is still felt,” Michele added.

The impact of those relationships has stretched beyond the people who walked away from the militia life.

The United Nations is known for taking a hands-off approach to nations’ sovereign right to prosecute crimes. When Michael worked for the U.N., he encouraged his colleagues to build the same bridges of understanding he pursued with warlords, because it was beneficial to both sides. The Sharps said this inspired U.N. representatives to take a more intensive role regarding the murders of Sharp and his colleague Zaida Catalán.

“It’s remarkable how much the U.N. has pushed and paid for investigations with these deaths,” John said. “To our surprise, it’s still continuing, and that is remarkable.”

“The evidence is now clear. Michael and Zaida’s murders were a well-planned conspiracy. They were a threat to the corrupt government in power at that time,” Michele added. “We thought that before, but now there’s evidence that is not being ignored. . . .

There are some excellent investigators, supported by the U.N., gathering evidence to give the prosecutors. The U.N. can’t prosecute, but they can assist. And they can monitor the trial, so it’s more credible than it has been for four years.”

It was already challenging to follow the trial before the COVID pandemic and other destabilizing factors. This prevented King from visiting the DRC for the book. But it also leaves the door open for future possibilities of sharing the stories Michael loved so much.

Mennonite Central Committee DRC country representatives Tim and Suzanne Lind told the Sharps one could never know the full story of Michael’s work without sitting with the women living in the displacement camps.

“The deep meaning of MJ is his ability to form these relationships with people who had been viciously raped and their husbands killed in front of them,” John said. “Marshall [King] couldn’t talk to these women — or the boy left for dead whom MJ picked up and took to a hospital and demanded he be cared for. We realize no book can say it all, so maybe we can call this a themed biography.

“It’s a good story. I understand the challenges as an author. Remembering the people of Congo whom MJ loved is an important reason for telling this story.”