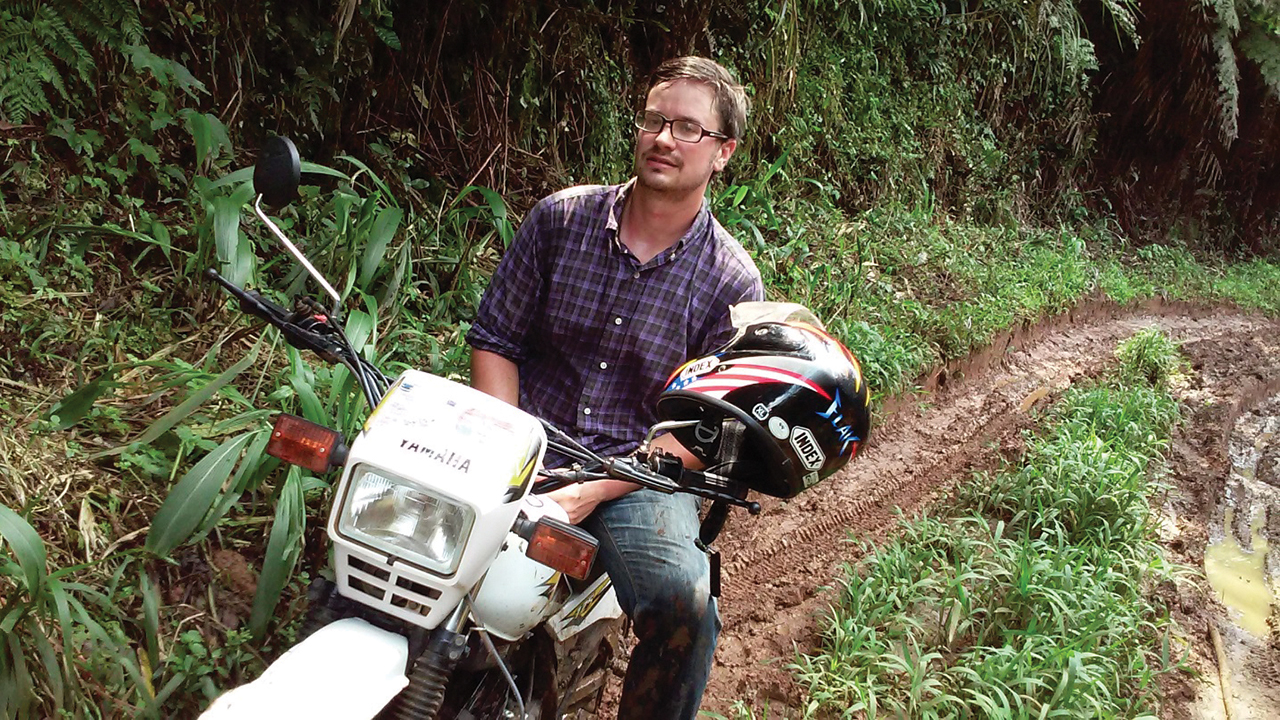 Michael Sharp after traveling the rough roads of the Democratic Republic of Congo by motorcycle. — Mennonite Central Committee

Dramatic stories of sacrificial Anabaptist peacemaking tend to be historic, even centuries old. One of the most recent is shared in a book coming out this month from Herald Press.

Disarmed: The Radical Life and ­Legacy of Michael “MJ” Sharp by Marshall V. King tells the story of the former Mennonite Central Committee and Mennonite Mission Network worker who was murdered in 2017 while investigating atrocities in the Democratic Republic of Congo for the United Nations. The five-year anniversary of his death, at age 34, will be in March.

“We hear the stories of 1-W service and Pax and conscientious objectors during the world wars, and here was a story of a man who was doing peacemaking work first as part of Mennonite Mission Network, then Mennonite Central Committee, and then the United Nations,” King said in a Dec. 2 interview from his home in Goshen, Ind. “And while he was practicing this Anabaptist peacemaking theology, he was also trying to figure out what it means to be Mennonite in the modern world.

“I saw it as a really good story of someone who had answered the call to be a peacemaker and inevitably put himself at risk, who was willing to take risks on behalf of other people and inevitably lost his life because of it.”

King was drawn to telling the story of a young Mennonite who picks up his things and goes off to practice pacifism in ways many others only talk about.

He worked with Rwandan refugees as Eastern Congo coordinator with MCC.

He sat with militia commanders to discuss conflict over cups of tea, part of a program that persuaded roughly 1,600 fighters to lay down their weapons.

Then he and his U.N. colleague Zaida Catalán of Sweden were kidnapped and fatally shot while investigating human rights abuses and sanctions violations in Kasaï-Central Province.

“He ended up losing his life,” King said. “At the time — and it’s still true — this is as close as a lot of Mennonites get to the knock on the door that a lot of military families live with.”

A former newspaper editor and distant relative of Sharp, King hit the road in 2017 to interview people close to Sharp. His travels took him from Indiana to Kansas and New Mexico, then Canada and ultimately to Europe, where he spent time with Catalán’s family in Sweden.

“I stayed in a room that was his in Bammental,” said King of Sharp’s Germany placement with the Military Counseling Network, a project of the German Mennonite Peace Committee. “I wanted to go to the [Democratic Republic of] Congo, but then there was election unrest, then Ebola, then COVID, so I never went there, and there were different opinions on if I could safely go to report this story.”

King was impressed by the number of people around the world who had stories to share about how Sharp impacted their lives.

“I’ve read the press clips, and there’s a lot in this book that has not been reported on MJ Sharp,” King said. “One of the things I worked to do in the book was putting MJ into context. Where does MJ sit with addressing the question of whether he was a martyr? Whether MJ was a hero?

“Using what people told me about him, [I worked] to put him into the context of historic Anabaptism and Mennonites in the 21st century, as well as just the larger human tale of how we live our lives in a divided world.”

Tim Huber is associate editor of Anabaptist World. He worked with Michael Sharp at the Military Counseling Network and was interviewed for Disarmed.