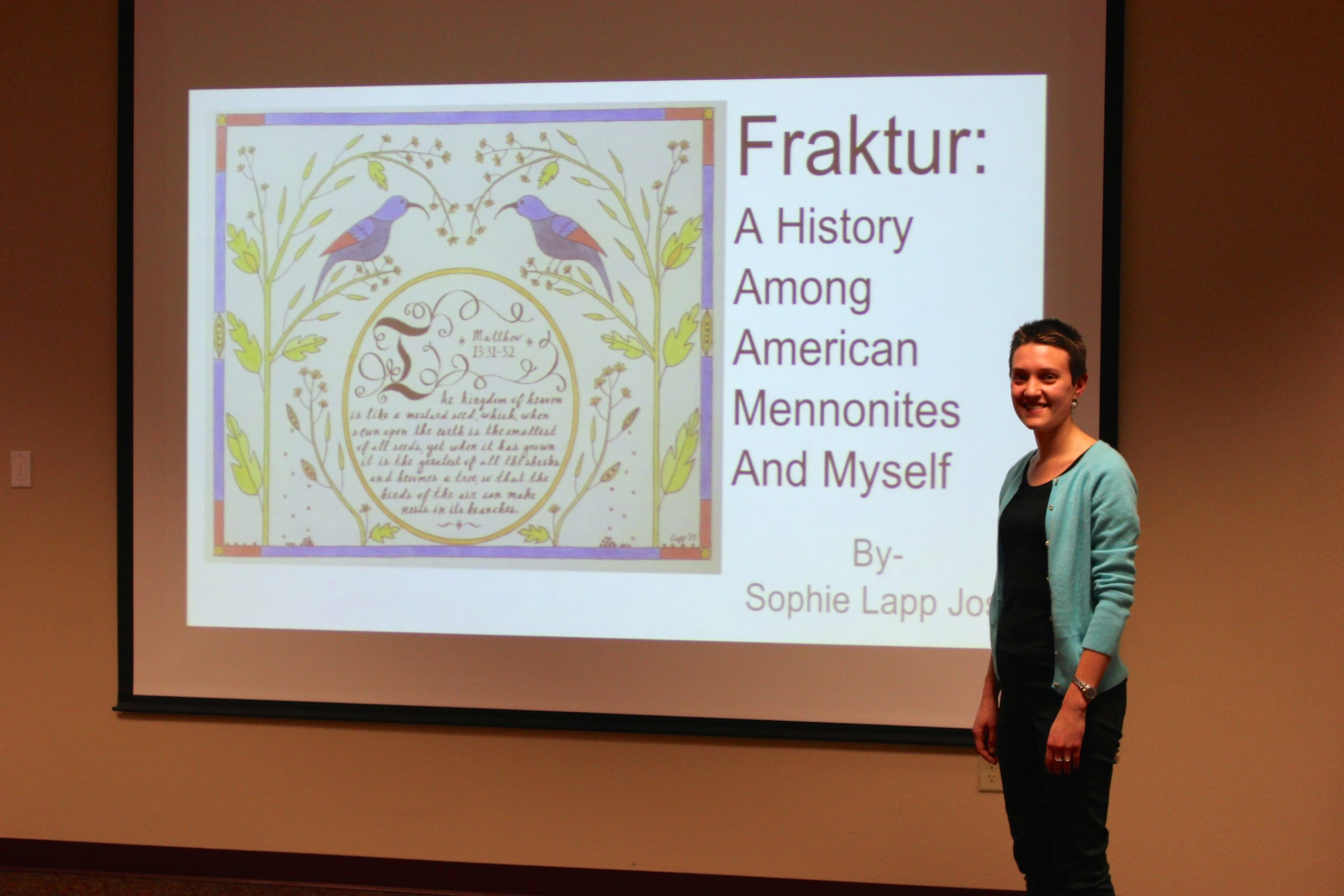 A 25-year-old man with sandy hair bid $50 for a piece of fraktur, a German style of block letter type, made by Sophie Lapp Jost. Not to be outdone, a woman who was 300 miles away used her computer to make an online bid of $55 for the fraktur.

In the end, the young man, the artist’s then-boyfriend, took home the fraktur with a final bid of $125. Sophie and David Lapp Jost were married in the summer of 2016.

The fraktur, features the words of Matthew 6:25, “Therefore I tell you, do not worry about your life, what you will eat or drink, about your body, what you will wear,” with the text surrounded by two bluebirds. The image now hangs in their bedroom-on David’s side the bed.

It wasn’t until she had graduated from Goshen (Indiana) College and left for a year of service with Mennonite Voluntary Service in Kansas City that Lapp Jost really began exploring the art of fraktur. She had newfound free time after work and began using some of that time to make fraktur.

“As a child I’d always wanted to be an artist, but most of my technical experience came from classes in

school, where I was also given particular assignments,” said Lapp Jost. “This new exploration of fraktur was the first step toward exploring my own artistic style and interest on my own time.”

Her other work includes a college graduation certificate for her sister, Eva; a Trauschein (wedding certificate) for two friends, Lucas and Hannah Geiser Godshalk; and smaller gifts for her family and friends.

Lapp Jost is studying for a master’s of divinity degree in pastoral ministry at Anabaptist Mennonite Biblical Seminary, Elkhart, Indiana, where her passion for art and ministry has deepened. For her final project in an Arts and Worship class, she was tasked with creating a proposal for an arts ministry.

“I ended up with the theme of an embodied arts ministry that encourages everyone in the church to expand their ideas of what it means to make and do art, and how our bodies are integral to that part of being human,” she said. “It’s very important to me as someone who chooses to identify as an artist that people don’t get stuck on the idea that artists need formal training and experience. I think everyone can and should be encouraged to make art in whatever form is most comfortable and meaningful to them.”

For Lapp Jost, art is not just about having the talent and expertise; it’s about making, being and doing.

“I believe that, since we were all created by a creative God, we are inherently creative ourselves,” she said. “All that being said, I do think there is still an important place for trained, or even self-taught, artists.”

“When I go about the work of creating any piece of art, I’m aware that God has given me the gifts to be able to do so in the first place,” she said. ” In the creative space I’m able to give of myself in one of the best ways I know how, while also experiencing God throughout the process.”

A fraktur image dating times of celebration in the Lapp family hung framed on the walls of her grandparents’, John A. and Alice Lapp’s, home in Goshen, Indiana.

Fraktur has taken on meaning as she has moved from observing its beauty on the walls of her grandparents home to teaching classes at her congregation, College Mennonite Church in Goshen, Indiana.

As a student at Goshen College, Lapp Jost wrote a paper about the history of fraktur in a History of Mennonites class taught by Steve Nolt. It was in doing that research that she learned more about its origins in Pennsylvania and other parts of the eastern United States.

German immigrants decorated their family manuscripts with specific kinds of images, symbols and text. When the tradition was brought to North America, manuscripts tended to become more detailed, as immigrants often lacked the recordkeeping parishes found in Europe.

The primary creators of fraktur during this early flourishing were schoolmasters, who could use their work to teach and encourage students, as well as to earn some additional income.

Andreas Kolb and Christopher Dock were two schoolmasters who were well known for their use of fraktur in the classroom. Dock often gave or assigned students vorschriften (writing samples) as well as rewarding them with smaller illustrated bookmarks for work well done.

Today, Christopher Dock Academy in Lansdale, Pennsylvania, continues this artistic tradition by rewarding its graduates with their own fraktur diploma.

Lapp Jost hopes to continue to experiment with fraktur in the future.

“As someone preparing for potential future ministry in the church, my hope would be that when that time comes I can find ways to joyfully and effectively incorporate art into my life and work,” she said. 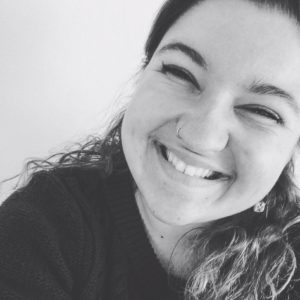 Emily Kauffman will be a senior at Goshen (Indiana) College in 2017. This article was written as part of a feature writing class.