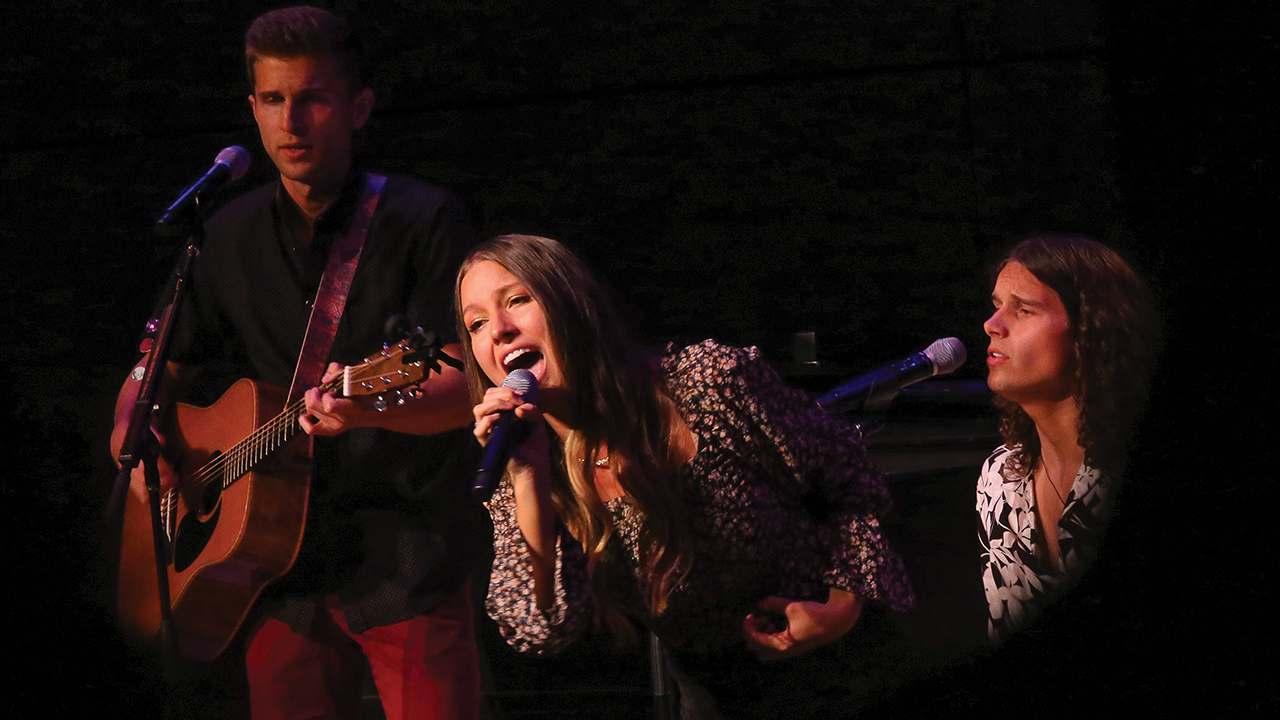 Girl Named Tom managed to work a homecoming into their schedule amid competing on NBC’s The Voice, performing a sold-out concert Oct. 1 at Goshen College’s Music Center during Homecoming Weekend.

The group, a sibling band composed of members of Zion Mennonite Church in Archbold, Ohio, has multiple connections to Goshen College. Brothers Caleb and Joshua Liechty are graduates who were involved in vocal ensembles, musicals and the Parables worship team. They and sister Bekah Liechty formed the group in 2019, around the time they graduated. Girl Named Tom toured the United States, visiting Mennonite churches, camps and colleges until the COVID-19 pandemic hit.

In an interview with WGCS The Globe, the college’s radio station, Caleb said the idea of forming a band came from their mother, Holly Liechty.

Instead of enrolling at Goshen mid-pandemic, Bekah stayed at home in the Pettisville area with her brothers, where the family continued polishing their craft.

“The pandemic really gave us a chance to focus on our music,” Bekah said. “Why are we singing? What is the purpose behind all of it? And so writing our own music — taking that time to really feel what we have been given and what we want to tell the world with our music — there was a silver lining with the pandemic.”

The Goshen concert was already scheduled before the band auditioned successfully on the season premiere of the nationally televised singing competition, which aired Sept. 20. All four celebrity judges expressed interest in coaching the group, who ultimately picked pop singer Kelly Clarkson.

“It’s amazing that we have gotten national exposure due to The Voice,” Bekah said. “Every musician wants to get their music in as many ears as possible and touch as many lives as possible, and we really feel like what we have is special.”

After the concert, the band returned to Los Angeles in time for The Voice’s “battle rounds.”

Their success continued in a matchup that aired Oct. 11 against country singer Kinsey Rose, in which Clarkson declared Girl Named Tom the victors.

“We really hope that the people who follow us on this journey will stick around when we release our own albums,” Joshua said. “Because that is the stuff that really fulfills us, and we hope that it has an impact on people’s lives as well.”