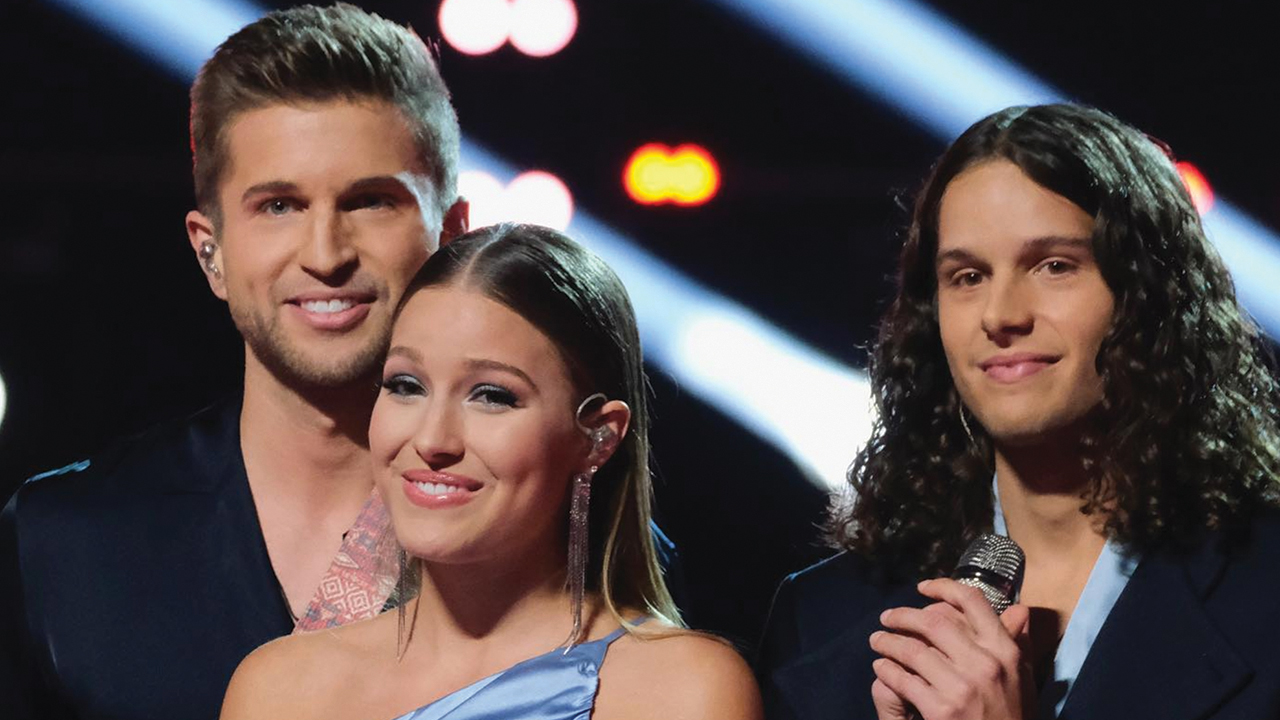 Girl Named Tom rode Mennonite sibling harmonies to their biggest success yet Dec. 14 when voting results on the finale of the 21st season of The Voice revealed they became the first group to win the NBC singing competition.

Caleb, Joshua and Bekah Liechty of Pettisville, Ohio, are members of Zion Mennonite Church in Archbold. Caleb and Joshua are Goshen College graduates who were involved in music activities while students there. They formed the band in 2019 and toured the United States visiting Mennonite churches, camps and colleges until the COVID-19 pandemic hit.

Instead of enrolling at Goshen during the pandemic, Bekah stayed at home in Ohio, and the family focused on music. The result: international exposure, a $100,000 prize and a recording contract.

“You have a huge fan base behind you,” celebrity coach Kelly Clarkson told the group on the Dec. 14 live broadcast. “Let’s capitalize on that. Let’s keep it going. I’m Team GNT forever.”

Not only was the group the first non-solo act to hold The Voice trophy, host Carson Daly said they were the first contestants to have four songs on the iTunes top 10 list simultaneously. Just after the broadcast, their rendition of Fleetwood Mac’s “The Chain” was No. 1, followed by their version of Joni Mitchell’s “River” at No. 2, ahead of artists such as Ed Sheeran, Jennifer Lopez, Adele, Elton John and Dua Lipa.

The evening was not a total cause for celebration. In the moments after Girl Named Tom’s victory, the Liechtys posted a statement on social media that their father was in horrific pain following another cancer surgery.

“The only reason we are still in Los Angeles is that our parents want us out here, doing what we love. We cannot wait to finally all be in the same room,” they wrote. “Some might think that this is the worst timing — our father taking such a downward spiral at the exact moment of our success on national TV.

“In truth, we feel fortunate and blessed by this joyful distraction. The Voice has given our family opportunities to connect, reflect and marvel at the love we have for each other.”