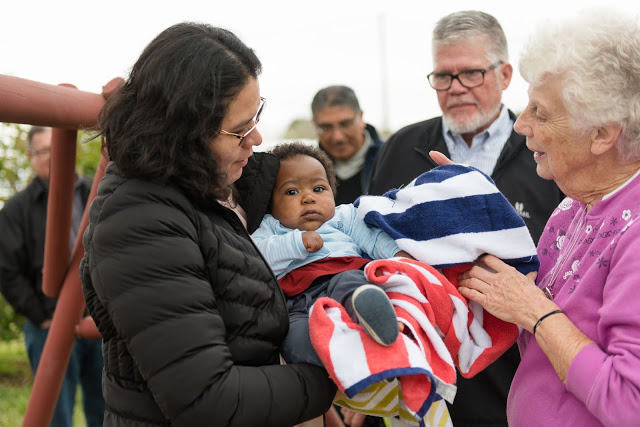 Photo: Sister Zita at the La Posada shelter with baby Emmanuel and members of our border learning tour. Photo courtesy of Janae Rempel.

The jar of meal will not be emptied, and the jug of oil will not fail.—I Kings 17:14

Ana Hinojosa remembers growing up on the Texas-Mexico border near Brownsville in the late 1980s. Her family’s house was a mile from the border wall, and she remembers extended family gatherings in her back yard. Ana, a Mennonite Central Committee immigration staff person, says border patrol agents would rest in the shade of the trees near the front of her house and, in the same day, it would be possible for a family from Mexico to knock on her front door to ask for food or directions. Her family turned no one away.

Life on the border can look quite different today.

When we enter the Catholic Charities respite center in McAllen, Texas, it is startling to see the contrast between the serenity of the neighborhood outside and the chaos inside. Cesar Matta tells us that today the center is hosting 350 people who have just arrived to be processed for asylum. Most of these people are fleeing violence and poverty in Guatemala or Honduras and will be here for just a day or two before they begin their journey to another part of the country, where someone has agreed to host them until their asylum hearing.

In a room just inside the entrance to the respite center, three volunteers are patiently processing the paperwork for dozens of the new arrivals. In the hallway, we meet a young woman and her child who left Honduras for the United States a month ago. Her child has a rash from wearing the same clothes too many days in a row, and now that she is in a safe place, the mother is eager to take the child to get a bath. In a kitchen area, a volunteer proudly displays the more than 200 sandwiches she will pack in lunches for these sojourners.

Fifty miles east of McAllen, outside San Benito, Texas, we visit the La Posada shelter hosted by the Sisters of Divine Providence. Since they began this work 30 years ago, the sisters have hosted more than 10,000 asylum seekers. Today, 40 people are staying here, including 17 children.Cesar says the chaos we see here is business as usual for the center, where tens of thousands of people take a few days’ refuge each year. Cesar is a full-time student but volunteers at the respite center because of the satisfaction he receives from helping others.

One woman from Zimbabwe was a human rights activist before she and her two children fled the threat of violence there. She wrote seven shelters, from San Diego to Texas, before she found the Sisters of Divine Providence, who were willing to receive her.

“We tell people they can make their home here but not for too long,” Sister Zita, the 85-year-old nun who directs the shelter, tells us. She says the families La Posada receives are like her own family and give her hope. She recounts the story of a father and child praying by bedside and how that example, along with many others like it, reflects the dependency these visitors have on God. “They are an inspiration to me,” she says.

At the South Texas Human Rights Center in Falfurrias, Eduardo Canales tells us about the center’s efforts to end death and suffering on the Texas-Mexico border through forensic recovery and identification, searching for missing persons and building water stations. 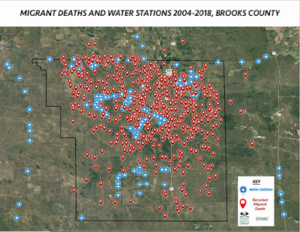 Eduardo says more than 750 people have died in the border region in the last 15 years, just within the 25- to 30-mile space where Brooks County touches the border. One way the center has responded is by placing 160 water stations on adjacent ranches, with the ranch owners’ permission. Other ranchers have independently begun providing food, water and showers for the migrants passing through. Eduardo says the water stations are a small effort with a big impact.

In the Old Testament text of I Kings, when the widow Zarephath gave what she thought was her last handful of meal and a little oil to the prophet Elijah, there proved to be more than enough meal and oil to last well into the future. Eduardo, Cesar and Sister Zita show us how God can multiply our small efforts to help migrants and others in need.