The question of how to understand the peaceable message of Jesus in relation to less-than-peaceable pictures of God in the Bible and in the Christian tradition has challenged ethically concerned people of faith almost since the very beginning. Anabaptists certainly have a stake in this perennial conversation. By lifting up Jesus’ life and teaching as normative and by accepting high claims for the authority of the Bible, we can’t avoid questions about how to harmonize what seem to be powerful tensions among the various sources of information about God. 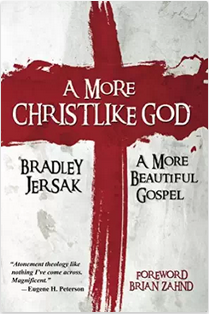 In recent years, we have seen renewed interest in revisiting these themes. For those, like me, who welcome this conversation, Bradley Jersak’s book, A More Christlike God, will be seen as a singular contribution.

Jersak does good original thinking and writes about deep issues in a clear and lively style. His own varied ecclesial journey (early life as a conservative Baptist, a stint as a Mennonite pastor in British Columbia, current connection with the Orthodox Church) is seen in his empathetic and inclusive sensibility.

The title captures the book’s basic argument: The resolution to the tension between Jesus’ peaceable message and other, more violent, images of God is simply to side with Jesus. This book is an exercise in thinking consistently about God in light of the message of love and mercy proclaimed and embodied by Jesus — the incarnation of the true God of the Bible.

Jersak is gentle in his incisive critique of problematic images of God. He acknowledges his own past adherence to those views, which helps him to recognize their attraction.

He suggests that in a broad sense we may think of God in two ways — a God of “will” or a God of love.

By “will” or “willful,” Jersak means a God who is in absolute control, free and powerful to do what he wants. Such a God has either subservient followers who do God’s will or enemies who rebel against God’s control. This image tends to understand God as a punitive judge and a dominating force.

Jersak admits that parts of the Bible portray God in this way. But such a willful God ultimately is a big problem and is incompatible with the portrayal of God we find with Jesus.

Jersak uses two technical theological terms, “kenosis” (self-emptying) and “cruciform” (“cross-shaped”), to describe how God is Christlike. The way to resolve tensions between God as all-powerful and the world as broken is to reconfigure our notion of “all-powerful” in terms of God’s self-emptying love, seen most clearly in Jesus’ cross-culminating life. Jersak refuses to allow for any distance between Jesus and God in how they exercise power and deal with evil.

Hence, Jersak’s is not a punitive, retributive God.

The book’s third section, cleverly titled “Unwrathing God,” draws heavily on the Gospels and the writings of Paul to explain how “wrath” is actually an expression of God’s love, not its counterpoint.

This leads to transforming the notion of atonement: It’s not about Jesus as receiving the divine punishment due to us as our substitute. Rather, it’s about the extraordinary expression of God’s mercy in Jesus’ life, death and resurrection.

“Wrath” is not God’s active anger but God’s respect for human choices, allowing for consequences when we refuse to live in God’s mercies.

The book culminates in Jersak’s summary of “The Gospel in Chairs” or “The Beautiful Gos­pel.” Two chairs are used to symbolize humanity and God. In one version of the gospel, God turns away from humanity after humanity turns from God. In the “beautiful” version, God never turns away but only awaits the return of human beings (reflecting Jesus’s “gospel in miniature” story, the parable of the Prodigal Son).

I can imagine some readers responding with a “yes, but . . .” They would say Jersak does a fine job of conveying the heart of the gospel as found in the message of Jesus. But they would be uneasy with how decisively he resolves the Jesus/God tension.

This is not my response, though. I am grateful for the forceful, clear, accessible message this book conveys. Along with Jersak’s lively, gentle and vulnerable writing style, and his strong analytical ability to make his case, he also helpfully ends each chapter with questions for reflection and a centering prayer.

Though Jersak engages the Bible in depth, this is still most of all a book written in engagement with the theological tradition. He does not very directly engage the biblical story as a whole — that is, he is not very attentive to the Old Testament.

In the powerful culmination of the book, chapter 14’s presentation of “The Beautiful Gospel,” Jersak does show how the story of Jesus is anchored in the larger biblical story. But this element is mostly ignored in the argument leading up to the culmination.

The message Jersak conveys clearly has social ethical ramifications, and he gives no hint that he wants to diminish those. But his focus seems to me a bit more apolitical than close attention to biblical emphasis would seem to warrant.

Jersak is engaging the theological strand of the Christian tradition. And Christian theology, at least since Constantine, has taken great pains to remain safely apolitical.

Still, I’m grateful for this book. Jersak has not given us the last word, by any means. But his is a good and vitally important word. Let the conversation continue.

Ted Grimsrud is professor of theology and peace studies at Eastern Mennonite University in Harrisonburg, Va.