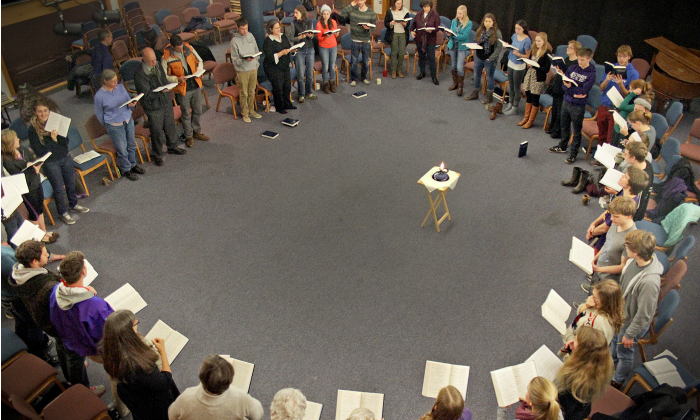 In 2014, the Goshen (Indiana) College Hymn Club organized an event to sing through the entire Hymnal: a Worship Book, the most recent songbook produced by Mennonite Church USA and the Church of the Brethren. The event lasted for 30 hours straight and raised over $15,000 for international peacebuilding agency Christian Peacemaker Teams (CPT), making it one of the largest fundraisers in CPT’s history.

Building on this success, the Hymn Club is planning another event to sing through the Hymnal over the course of six days. Participants will gather March 12-16 from 6-11 p.m. in Newcomer Center room 19 on the Goshen College campus. The finale night, Friday March 17th, will take place in the Music Center choir room starting at 9 p.m. and going “until we finish,” wrote GC student and hymn club member, Eliana Neufeld Basinger.

The model of a “hymn sing marathon” is not new, and is something that has occurred occasionally on the GC campus. The Hymn Club hopes to build on this singing legacy and expand its impact.

“It is important to us that Hymn Club isn’t just a fun activity for us on Tuesday nights,” said Neufeld Basinger. “It can be something that benefits the broader world in a concrete way. We thought that it would be nice to partner with local churches this time to involve the community more, and that it would be easier for community members to come and participate if we sang six consecutive evenings rather than through the night.”

The Hymn Club is partnering with area churches and organizations to provide song leaders, instrumentalists and snacks. All events are open to the public, and attendees are again encouraged to bring a donation to support the work of CPT.

According to Neufeld Basinger, giving to CPT is one concrete way of living out the theology of peacemaking and justice that is interwoven throughout the Hymnal.

“We’re drawn to CPT because it offers direct action to promote peace, in the form of accompanying local peacemakers, as well as other activism. It is one of the few organizations that offers a direct alternative to war,” she wrote. “Supporting CPT’s nonviolent action is a small way of changing our beliefs from nice intellectual statements we agree with into commitments that drive us to respond to situations of real violence and oppression.”

Photo: Singers work their way through the “Hymnal: A Worship Book” just before midnight during the 2014 “Sing for Peace” hymn marathon at Goshen (Indiana) College. (Photo by Brett Conrad)