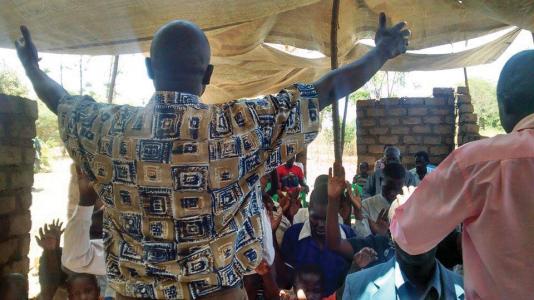 “Uganda is ripe for evangelism, and the church is growing,” says bishop Simon Okoth, national coordinator of Uganda Mennonite Church. The new Mennonite World Conference (MWC) member church (accepted by the Executive Committee in 2017) grew from 310 members in seven congregations reported in 2015 to 553 members in 18 congregations in 2018.

Every three years, MWC collects information from its members to publish for its members, showing the growth of national churches around the world in member churches and those who are not members or are on the path, such as Uganda Mennonite. Global statistics, a global map showing the most recent statistics for Anabaptist churches in each country and a large wall map, are found here.

Overall, Anabaptism worldwide has grown to 2,131,000 baptized members in 86 countries.

Much of the growth in Anabaptist-Mennonite congregations can be seen in the Global South, in national churches such as Uganda that are springing up in peri-urban areas (the hinterlands outside cities). Growing greatly in number, Uganda Mennonite Church congregations face many challenges: buildings barely covered by a roof and with no windows, a lack of chairs for church members to sit on during services, pastors who have no formal training and sometimes no paycheck.

Asia and the Pacific saw a 2 percent growth in baptized members, although the number of baptized members of MWC decreased slightly. Greater precision in reporting accounts for some of the decreases reported in countries such as Indonesia and Vietnam. Bharatiya Jukta Christa Prachar Mandli, an Anabaptist church based in Kolkata, India, shows the greatest increase: 36 percent growth, from 2015’s 2,725 baptized members to 4,260 in 2018.

In Venezuela, where economic collapse has made daily life difficult, MWC associate member church Casa de Restauracion y Vida Shalom saw its membership fall by more than half, from 250 in 2015 to 120 in 2018.

Europe, cradle to the Anabaptist faith, saw losses in historic areas, such as the Netherlands, where the Algemene Doopsgezind Societeit fell from 7,650 members in 2015 to 5,725 in 2018. However, new expressions of Anabaptism are growing in Albania and Spain. The former grew exponentially, from 30 baptized members in 2015 to 120 in 2018, while Anabautistas, Menonitas y Hermanos en Cristo in Spain increased from 376 to 501, aided by mission work from Amor Viviente of Honduras.

In North America, Mennonite Church USA reported a 33 percent decrease in baptized members, as Lancaster Mennonite Conference left the alliance to form a separate conference. Several other national churches reported slight decreases overall, while the Conservative Mennonite Conference in USA showed a 2 percent growth. The Be in Christ Church of Canada (formerly Brethren in Christ) is growing steadily, with approximately 17,000 attendees in 2018. (2015’s reported membership of 4,080 used a narrower measure of membership).

Overall, MWC member churches have grown by 2 percent since 2015, while Anabaptists counted globally have grown 1 percent. Globally, two-thirds of Anabaptists are found in the Global South.

Counting only MWC-member churches, that number shifts to 81 percent of members living in the Global South, in places such as Uganda.

“The Mennonite Church Uganda is quite happy and honored to be member of the global family of the MWC,” says Okoth. “May God sustain us together.”

Prayer for kidnappers is deeply rooted in Anabaptist faith