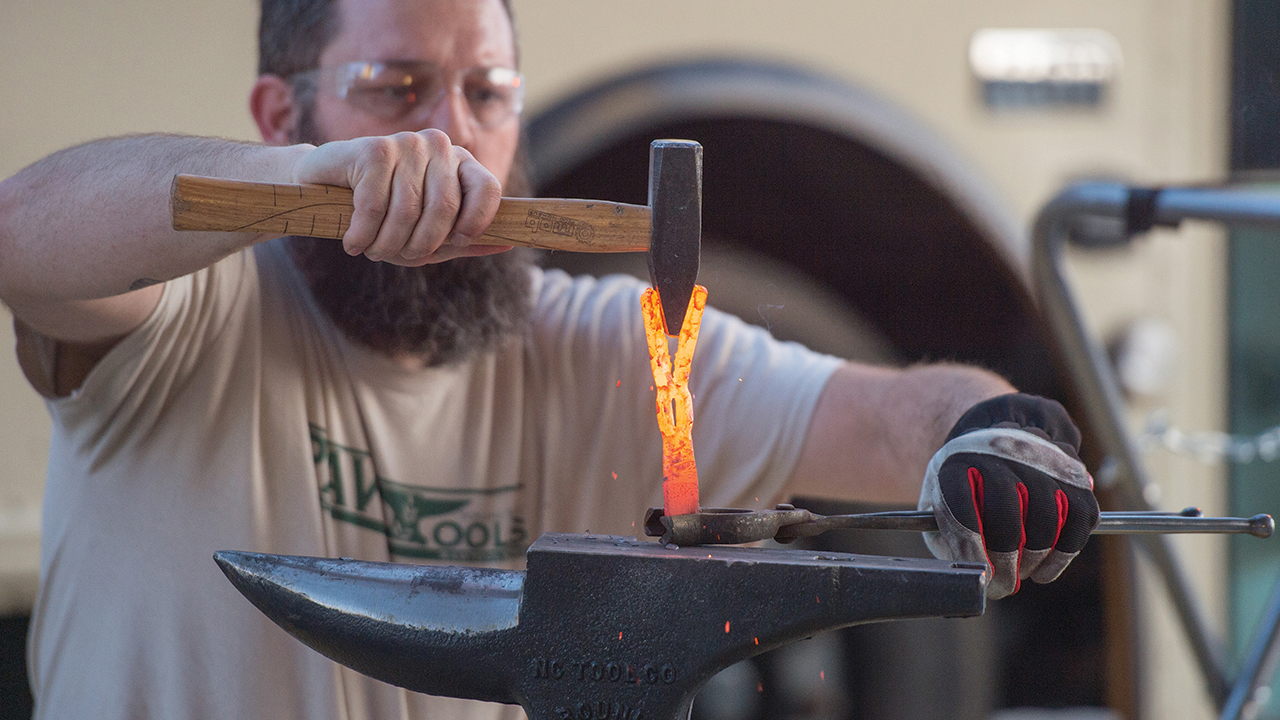 Michael Martin, founder and executive director of RAWtools, forms the metal of what used to be a gun into a hand-held garden tool in 2019 at Hesston College. — Larry Bartel/Hesston College

Mennonite Church USA is partnering with RAWtools Inc., an organization that transforms donated guns into garden tools and art. The collaboration encourages MC USA congregations to engage in peacemaking by holding gun-donation events.

In January, Portland Mennonite Church in Oregon and First Mennonite Church of Denver, Colo., were the first two MC USA congregations to participate in the collaboration by hosting local residents at their church and helping them disable firearms.

“Even though we haven’t had an official relationship with RAWtools, we’ve always affirmed their restorative work in addressing gun violence as followers of Jesus,” said Sue Park-Hur, denominational minister for transformative peacemaking. “It just felt like a natural partnership that was already there that we made more official.”

A ministry of Mountain States Mennonite Conference, RAWtools began eight years ago in response to gun violence, with a vision born from Isaiah 2:4 and Micah 4:3: “They shall beat their swords into plowshares and their spears into pruning hooks.”

Michael Martin, founder and executive director of RAWtools and co-author of Beating Guns: Hope for People Who Are Weary of Violence, is licensed for the specialized ministry of RAWtools by Mountain States Conference.

Martin’s Anabaptist roots and desire for a creative and life-giving path forward that offers restoration from gun violence led to him founding RAWtools.

“Publicly turning a gun into a garden tool is a great visual to invite communities to alternative tools and solutions for conflict resolution,” he said.

Park-Hur said: “As Mennonites, we have made statements against gun violence, and yet the culture of the United States can make talking about gun violence difficult, even in our own churches. This collaboration is an opportunity and an invitation for churches to become more bold in their peace witness.”

Over the past eight years, several MC USA congregations have participated with RAWtools through the Disarming Network. The collaboration has strengthened the relationship between the two organizations.

When a gun is donated through an MC USA congregation, the gun is disabled onsite by trained volunteers. The barrel is sent to the RAWtools facility in Colorado to be made into a garden tool, which is then returned to the gun owner. The remainder of the gun is made into art, either by local artists or by RAWtools. This art is then sold at auction, with all proceeds returning to MC USA’s Justice Fund.

MC USA and RAWtools encourage individuals and congregations to be vocal about their desire to create tools of restoration from tools of violence through gun donations and restorative justice practices.

There are several ways to get involved:

— Congregations, individuals and organizations can become part of the Disarming Network as an MC USA partner and hold gun-donation events or lend tools and knowledge to help others disable their guns.

— People can donate their guns.

— Artists can work with congregations in the Disarming Network and art collectives or makerspaces to create art out of the leftover gun parts, which will be sold at auction for the Justice Fund.

— Police departments can donate confiscated guns through the Disarming Network.

— Congregations and individuals can use restorative justice tools for conflict resolution.

Mountain States Conference and RAWtools are scheduled to hold a Gun Violence Round Table on June 25-27 in the Denver area.

With a mission to “Disarm Hearts and Forge Peace,” RAWtools has been turning guns into garden tools and art since 2013.

“This is more than just activism. This is discipleship,” said Joel Shenk, pastor of Toledo Mennonite Church in Ohio, of the movement to turn guns into garden tools.

For the congregation’s first gun-donation event, Shenk partnered with a local blacksmith, who provided his equipment.

“Since that time, he and I have collaborated on four other demonstrations, and we even taught a five-session class to youth and young adults,” he said. “We taught the basics of blacksmithing and integrated peacemaking concepts along the way.”

The local police chief and juvenile court judge have shown their support. The judge brought some youth with gun charges to one of their events.

“It opened their minds,” Shenk said.

He instills the value of this work into his congregation.

“It has given a vision and mission to our church in a fresh way,” he said. “I try to connect it explicitly to discipleship. We ourselves are tools being forged into instruments fit for the kingdom. The crucible of the forge and anvil is a metaphor for our own spiritual growth into Christlikeness.”

Claudia Aguilar Rubalcava, pastor of First Mennonite Church of Denver, and her congregation provided their space for gun donations in January. They plan to hold bigger events in the future.

“When you are dismantling a gun in public, sparks fly, literally, and they catch people’s attention,” she said. “My hope is that, once we can gather in groups, we make a big deal out of it, and we can invite people from the community to witness this powerful experience.”

She sees this work as part of the Christian’s responsibility.

“RAWtools shows us that peace means dismantling the tools and systems of evil in literal and figurative ways, even if that means discomfort and confrontation,” Aguilar Rubalcava said. “That is what we have been called to do as Christians.”

She said the impact is hard to measure.

“I think it reaches beyond our wildest dreams. Those of us who have been there as a weapon is cut in half will tell the story to many. And those many will tell it to others. That’s how change happens.”