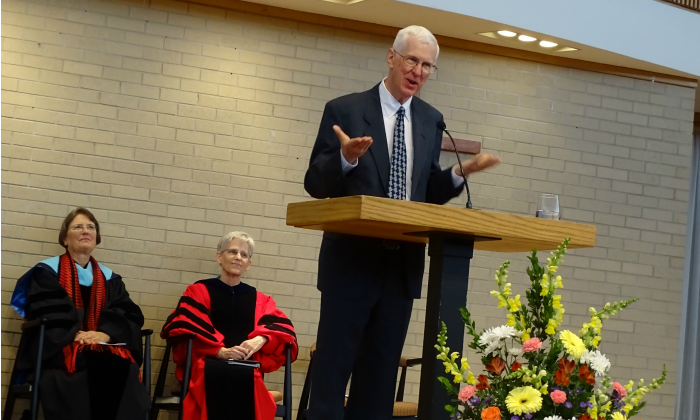 Alan Kreider was Professor Emeritus of Church History and Mission at Anabaptist Mennonite Biblical Seminary in Elkhart, Indiana. He passed away on May 8, 2017. He is pictured here speaking at the 2016 AMBS commencement ceremony. From left to right in background, President Sara Wenger Shenk and Dean Rebecca Slough look on. Photo credit: Melissa Troyer/AMBS.

Jessica Schrock Ringenberg is pastor at Zion Mennonite Church in Archbold, Ohio, and one of Kreider’s former students.

It was not your average evening class. Normally, attending any class from 6:30-9:30 p.m. with a two-hour drive home “to look forward to” afterwards would not be appealing. Especially for those of us commuting students who were often cramming as many classes into one day as possible so that we only had to drive out once a week to the Anabaptist Mennonite Biblical Seminary campus in Elkhart, Indiana. Often some of us would leave home at 6:30 a.m. and not return home until 11:30 p.m.

But this class, “Worship and Mission,” was different. Alan Kreider was different. He was unlike any professor of Church History that I have ever known. On a weekly basis we would be so wrapped up in his passionate lesson that 9:30 p.m. would appear out of nowhere and he’d abruptly announce, “Egads! Our time is done.”

Not a single person was ready to leave.

It always seemed like there was so much more we could learn from him and there was never enough time.

While I value the countless Church History classes I have taken over the years and countless history professors I have engaged, Alan’s orientation towards history and the purpose of it was something different.

Church history was never simply an academic venture nor was it meant for the purpose of simply pointing to the past. It was always an instrument that was meant to propel us into God’s mission for the future. Alan’s history lessons were always in an effort to move the church forward. Missio Dei.

I believe it was this constant dance between the lessons of history and their meaning for the future that gave him such an optimistic message for the future of the church. And his message was contagious. It was as if the whole breadth and depth of Church history was constantly pointing toward God’s sovereignty in keeping the gospel of Jesus Christ alive until we could pick up where history left off.

And so, while the rest of the Western world is mourning Christianity’s falling to the margins, Alan encouraged us to imagine what that could mean for recovering the vision set forth in the early days of the church.

I suppose when you have the accumulated knowledge of Church history to draw from like Alan did, it would be pretty hard not to recognize how somehow God always makes a way. We simply have to be careful stewards of the vision and interpreters of the gospel for the future.

I am forever grateful for the many lessons still being learned from Alan’s work. And still my heart breaks for Ellie and the rest of his family and the whole church’s loss.