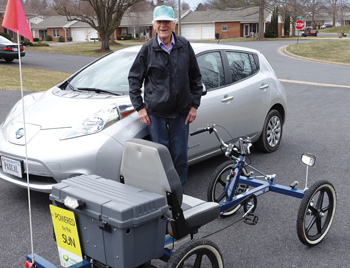 An avid user of solar power, Calvin Redekop of Harrisonburg, Va., drives an electric car, which he plugs into the solarized system at his duplex, and rides a four-wheel cycle with pedals and a solar-powered battery. — Russ Eanes

That bit of advice could just as well have come from Calvin Redekop, who has spent 94 years being all that he could be in the realms he inhabited.

As a sociologist, writer, teacher and activist, he has contributed mightily wherever he went and visibly altered the worlds of church, business, service and the environment.

In 1951 Redekop had already tipped his hand as one of the first Mennonites to visualize a new way to “be Anabaptist” in the world. He was an architect of the Pax program, a “peace corps” through which young Mennonites could help rebuild postwar Europe as an alternative to military service. Pax would become a vehicle for 1,200 Mennonites to show love for neighbor while bringing justice to pockets of need.

In 1952 he roiled tranquil waters through the “concern movement,” which would serve as a theological trim tab on the Mennonite rudder of change. He was one of seven initiators of the movement along with Irvin Horst, David Shank, Orley Swartzendruber, John W. Miller, Paul Peachey and John Howard Yoder. Over the years it produced 18 pamphlets on critical issues facing Mennonites. It would wane by 1972, but its impact was deep. It provided a home for young theologians and emerging leaders to boldly explore Mennonite theology, renewal, the nature of the church, its mission and its relation to society.

Cal Redekop arrived at Hess­ton College in the summer of 1954 for his first teaching position (social science). Full of idealism and energy, he challenged his students to think about church authority, nonconformity, women’s roles and, especially, wealth and materialism.

By the time he took a break for further studies, “1960s fever” was emerging on campuses across the country, and many students, including Mennonites, were protesting. They questioned an assumed alignment of business and even educational institutions with “the establishment” and suggested that corporate self-interest was outpacing social concerns and obligations. Redekop himself was troubled that the individualism and self-interest he saw in capitalism ­didn’t mesh with Jesus’ teaching.

“Armed with more sophisticated intellectual weapons, I returned to the campus with a freshly minted Ph.D. from the University of Chicago in the fall of 1958,” Redekop recalls in a memoir. “I expressed these convictions in my college and Sunday school classes. I semi-consciously reflected the increasing challenge to the status quo that was emerging in America.”

Invited by local Mennonite churches to lecture on “The Christian and Business,” Rede­kop eagerly accepted. He proposed that Christians were called to a life of service, that material wealth was to be used for the benefit of others and that selfish accumulation was incompatible with the Christian life.

Students ate it up, but not everyone else did. One dissenter was Lyle Yost, founder of Hess­ton Corporation, a new and vibrant manufacturer of agricultural equipment, who paid a visit to college president Tilman Smith to complain. Yost, chair of the college board at the time, implored Smith to “constrain this radical who has no experience in the real world.”

Smith responded that as long as Redekop maintained moral and intellectual integrity “I will stand by him,” but still counseled the young professor to tone down his rhetoric.

Redekop was shaken. “I loved my teaching job at Hesston College,” he says. “I did not want to become alienated from it nor from the Hesston Mennonite Church, nor from the local businesspeople.”

He and his wife, Freda, (who died in 2011) talked it over. Perhaps he had been too radical and needed to more deeply consider other perspectives. Often a voice of idealism blended with reality, Freda urged him to get involved in a business so he would have more credibility and could not so easily be brushed off as naive and inexperienced.

Accordingly, Redekop went to see John Reschly, who was part of a young company (then called Hesston Industries) that made tractor cabs. Redekop asked if he could become a “listener” and learn how businesses run.

Reschly welcomed him warmly but said he would have to “put some skin in the game.” Buy stock, in other words. That would be easier said than done for a young academic with graduate school debts and no savings.

Flexing an entrepreneurial spirit of his own, Redekop and a friend decided to buy an old house that had just come on the market, spruce it up and resell it for a profit. “Soon thereafter I walked into John Reschly’s office and plunked down Freda’s and my half of the profit, $1,000, for 100 shares,” he says.

A lively learning curve awaited the new stockholder. The young company (later renamed Excel Industries) was an early leader in a rapidly expanding combine and tractor cabs market. It had all the typical growing pains of a small company. “Every day brought new crises,” Redekop recalls.

Then he was invited by D. Elton Trueblood to a new position at Earlham College in Richmond, Ind. But even at a distance he remained an Excel board member for many years.

“I left part of my heart at Excel Industries, having tasted some of the excitement and challenges of starting something new,” he says. “I became more and more interested by the concrete and challenging intersections of faith and business. I was beginning to like the stimulation and challenge of developing a business and tackling the unpredictable.”

The company flourished and instigated socially conscious policies, including profit-sharing bonuses and 10 percent pre-tax profit contributions to the Mennonite Foundation. Excel, still based in Hesston, is today a leading manufacturer of Hustler turf equipment.
At Earlham, Redekop became more immersed in the nexus of faith and business.

When he moved to Goshen College he floated the idea of an institute for church and industry. Key businesspeople supported the idea, saying “the growing rift between the colleges and businesspeople needs to be healed.”

Out of this grew the Church Industry and Business Association, or CIBA, in 1969, whose aim was to help people in business to express their faith and ethical concern and expand the potential for Christian witness in industry and business.

At the organizational meeting in Chicago, Redekop got his own dose of “young radicals.” Mennonite college students were skeptical of this “capitulation to the establishment” and staged a protest. (Some later had a change of heart and became members.)

CIBA, based at Goshen College, held regional seminars and meetings and in 1970 launched a quarterly CIBA newsletter with Redekop as editor. In time, CIBA would merge with another group to form Mennonite Industry and Business Associates. In 1980 Rede­kop’s newsletter grew into The Marketplace magazine and became the institutional voice when MIBA merged with Mennonite Economic Development Associates a year later.

Few Mennonites have written more widely on business ethics and faith. Alongside editing The Marketplace until 1985, he undertook numerous research projects relating to business.

Another area of engagement was the environment. To Rede­kop, human “dominion” of the earth has been woefully misunderstood. “The created world is indeed a most generous garden, to be lovingly nurtured and tended so it can be shared, not ravaged or exploited for personal gain,” he says.

This became a target for both business and scholarly attention. In 1976, while employed at Tabor College, he launched Sunflower Energy Works Inc., which developed thermal solar collectors that would be widely used in central Kansas. When he moved to Waterloo, Ont., in 1979 to teach at Conrad Grebel College, he spearheaded a similar company there.

After retiring from teaching, he worked with the Environmental Task Force of the Mennonite Church and produced Creation and Environment: An Anabaptist Perspective on a Sustainable World (Johns Hopkins University Press, 2000). He continues to write and challenge Mennonite institutions to re-examine their environmental behavior.

He persuaded the Virginia Mennonite Retirement Community in Harrisonburg, Va., where he lives, to allow him to solarize his duplex. He then purchased an electric car that plugs into his system and acquired a four-wheel cycle with pedals and a battery with which he negotiates local streets.

He is also a driving force behind Secure Futures, which has grown into one of the leading solar installers in Virginia.

Many aspects of his personal vision come together in the JustPax Fund, which he helped create to financially support projects that pursue environmental, gender and economic justice.

Redekop was the prime mover behind the development of the Brethren and Mennonite Heritage Center in Harrisonburg, a historical center and museum that includes the preservation of important Mennonite and Breth­ren houses, schools and mills.

He keeps involved in the Ana­baptist Center for Religion and Society, which has incubated projects such as My Calling to Fulfill: The Orie O. Mill­er Story, a biography by John E. Sharp and Being Mennonite in America, a film being produced by Burton Buller.

Now, at 94, Redekop still keeps keenly abreast of issues close to his heart and is not shy to share his convictions widely. His most recent project is “Eight Theses on Anabaptist Responsibility in the World,” written in 2018 with the late theologian C. Norman Kraus. It expresses their reservations regarding the Mennonite ethos, including rethinking issues like patriarchy, the environment, population control, social engagement and the importance of justice in peacebuilding.

“For his entire life Cal has stayed within the Mennonite/Anabaptist fold, always raising questions at key inflection points but always as a tribal member,” says Burton Buller, a longtime friend. “And as he has aged he has felt freer to call Mennonite institutions to accountability on emerging issues. In this way, he may exhibit the best of the prov­erbial wisdom of the elders.”